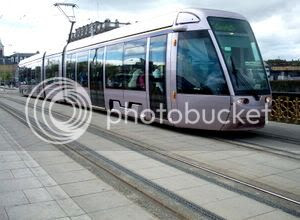 Yesterday, I told you that peak oil is coming, and its consequences will be far more severe than higher prices at the pump. Today, I decided to see how the Lehigh Valley Planning Commission proposes to deal with our energy crisis. Its draft transportation plan deals with peak oil by ignoring it. As a result, it is unrealistic.

At its public meeting today concerning its long range transportation plan, some Lehigh Valley Planning Commission members said they wanted to think "outside the box." Well, that's pretty hard to do when you're sitting inside one. The meeting was conducted inside a big box very much like the other big boxes along Marcon Boulevard. LVPC, you see, is headquartered in an industrial "park" that until recently was farmland.
Here's an idea. If LVPC really wants to think "outside the box" on a matter as important as our long range transportation plans, why not schedule a public meeting when the public could actually attend? Today's 9 AM meeting guaranteed a minimal public turnout, although the small room was definitely packed.

If the LVPC was interested in thinking "outside the box," it would address the changes that will have to come as a result of peak oil, as we move from our oil addiction to a more self-reliant economy. We won't be driving as much, and it will make sense to expand mass transit alternatives.

In its long range plan, the LVPC does devote an entire chapter to factors affecting travel demand. Not one word in that chapter or in the report itself considers or even mentions the reality of peak oil. It blissfully and mistakenly assumes we will remain the beneficiaries of a bountiful oil supply.

Given this basic flaw, it is no wonder that it deals only minimally with mass transit, which it considers more or less a bone thrown in the direction of the poor and seniors. Light rail to connect cities within the Lehigh Valley is not even mentioned. Of course, the study recommends that Route 22 needs to be widened. And nary a word about those 65 mph speed limits.

The LVPC must consider the reality of peak oil, which has been acknowledged both by the oil industry and President Bush. Any report that does not consider and plan for our impending oil crisis is worthless.

MoveOn.Org. is sponsoring a National Day of Action for an "Oil Free" Congress.

Where: Gas Station on 3rd and New in South Bethlem.

Merci Beaucoup, mademoiselle ChatBrat. But you've said it pretty well yourself in an outstanding op-ed published by the Express Times.