The Great Wall of the Lehigh Valley 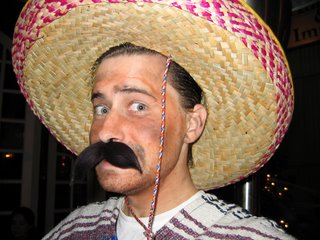 EASTON: - Inspired by the recent success of Mayfair's fence at excluding Allentown's low-income population, a bipartisan consortium of local government leaders today announced plans to build a wall around the Lehigh Valley. Flanked by Northampton County Councilman Ron Angle and the ghost of Allentown Councilwoman Emma "English only" Tropiano, DA John Morganelli conducted press conferences every hour today to announce the wall, to be funded through a surcharge on all local Taco Bells.

Asked who would build this wall, Morganelli said, "I'll talk to the construction unions like I always do, find out where those illegals are working, and then round 'em up. Every time I pick them up, the judges keep letting them go. But this time they'll have to build that damn wall first. "

When asked why he never prosecutes the businesses who actually hire undocumented workers, Morganelli responded, "Did I tell you I'm writing a new book? It's called 'D-Day Aliens.' "

Angle was asked why he teamed up with a Democrat, and responded, "Isn't Morganelli a Republican? You could have fooled me! The bottom line is those walls keep out the riff raff. I mean, look at China's Great Wall." When told that wall had been ineffective, Angle said, "Did I tell you that Morganelli is writing another book?" It was learned later that Angle has been deputized by Morganelli and will now be patrolling the Delaware River in a cigarette boat. Tropiano's suggestion that machine gun nests be stationed along the wall was overruled by Morganelli.

Matteo Braccili, who owns the Lehigh Valley's only Hispanic radio station, WHOL 1600 AM, was asked what he thought of the Great Wall. He answered, "Â¿Cree que va a llover?" He was immediately shot by Tropiano's spirit for speaking an alien language in "English Only" Allentown.

In a related matter, the Morning Call today announced plans to terminate all of its Hispanic reporters. Ardith Hilliard, executive editor of The Morning Call, explained that a reporter's decision to be Hispanic violates the company's ethics policy, which was developed to protect the paper's credibility and impartiality. That policy prohibits employees from participating in "public demonstrations in favor of or in opposition to a cause." Explained Hilliard, "We feel that by being openly Hispanic, they're taking a position in the immigration debate. We asked them not to be Hispanic but they refused, so they're out of here."

Bloggers Note: John Morganelli, Angle and Morning Call editors very good senses of humor and can laugh at themselves. I'm not so sure about the ghost of Emma Tropiano.
Posted by Bernie O'Hare at 6/30/2006 12:01:00 AM

That was so funny that all I can say is: there is something seriously wrong with you! But, I mean that in a GOOD way, of course!!

What the Call did to Frank Whelan is beyond disgusting. Just like what they did to Chuck Ayers, who was a damn good reporter. Instead of practicing the diversity they preach in their own pages, they act like closed-minded bigots. Makes you wonder what other biases they have that influences what gets in the paper and what doesn't.

I hope Whalen wins his lawsuit and ends up owning that rag. Hey Bernie, why don't you take the case as Frank's lawyer???

I can't. But even if I could, I only fight losing causes.

Hey Bernie, a sure way to get the "great Wall" built" is to design it as a highway. How about an 8 lane outerbelt, starting east of Phillipsburg,heading northwest around College Hill, then west North of Bethlehem, gently turning south intil intersecting with I-78 in New Smithville. From there, it bears Southeast through Lower Macungies few undeveloped Farm lands, then due east through Downtown Emmaus to once again cross I-78. I 78 as it is could be the southern barrier. We could make it an EZ pass toll road with only 4 exits, and move earth to make it 20 feet high all around, so need to worry about it ever being flooded, because it will cause flooding! It will be easy to defend, and act as a natural barrier to keep out those pesky creatures like deer and bears.
Think of the development opportunities!! There's money to be made all around!!! Don't want to seel your home to build the new highway?!! I got two words for you: Eminent domain!!

I will forward your suggestions to Morganelli and to the LVPC, which is putting the final touches on its surface transportation plan. I think there's a future for you w/ "Liberty" Property Trust.

Some people might complain that your combo wall & road will interfere with our parks, but the only parks I like are industrial parks.

I love the smell of fresh asphalt in the morning

Bernie, do me a favor and spellcheck for my idiot husband

Bernie, I think Emma would like this . She had a great sense of humor.

Rick, I'm glad you told me this. Last night, my bed started levitating, and then I started speaking Lation backwards. All day today I've been puking up pea soup. I'm relieved to know it's a simple case of demonic possession and not the wrath of Emma.

Madbatter, do not make your wife angry unless you want to sing soprano.

Oh my God! I laughed so hard it hurts.

The articles first paragraph reads: "Warren County needs a knockout punch to reach a point where at least the county southern end can become a viable economic-development partner with the Lehigh Valley."

This has taken the alchemy of "regionalism" too far, beyond Northammpton and Lehigh counties to include Warren County, Hunterdon County, and, in fact, all of New Jersey, under the GLVCC's Easton Council, whose president Easton's District 2 representative on Northampton County Council, J. Michael Dowd.

"It takes bullies to change people's mindset," Salamone's article continues, quoting Paul Pierpoint, one of four panelists who participated Tuesday evening in "Uniting a Region," a meeting organized by the law firm of Florio & Perrucci and The Express-Times.

Pierpoint, who is community education dean at Northampton Community College, noted the school's former president, Robert Kopecek, stressed for years that a strong employee base would offset closings at Bethlehem Steel, Ingersoll-Rand and other major emloyers.

Marta Boulos Gabriel, continues Salamone, vice president of the Greater Lehigh Valley Chamber of Commerce' Easton council, said during the chamber's 13 mergers over the years, the region's largest chamber has found that "local control is important, and we give them that."

The fact is that Gabriel and the GLVCC have taken over all local chambers like TRACC through a series of ruthless power plays.

Former Gov. Jim Florio, who kiced of the meeting, noted instances of by-state cooperation, including the Port Authority of new York and New Jersey.

People (at the meeting) also mentioned LVEDC and the Delaware River Joint Toll bBridge Commission as catalysts in establihsing a regional group that would incorporate Warren County's interests.

DRKTBC Chairman Philip Mugavero said he thinks the bridge agency would be open to participating in a regional group.

"I think we're on the verge of undergoing a major change as far as commerce, economic development and transportation," said Mugavero, a former Phillipsburg mayor.

"The average person thinks it's about time that the leaders of the community get together and start thinking more globally and trying to come up with ideas to imp;rove the region."

At a May 2005 meeting at Warren County Community College, Florio and his law partner, Michael Perrucci, offered their services to landowners angry about their inclusion in a sweeping preseration zone. Although it was billed as an inforation session, one farmer said it sounded more like a sles pitch.

This meeting was reported in the August 14, 2005, edition of The Newark Star-Ledger in an article by reporter Steve Chambers, who covers land-use issues.

Mrs Redneck is out teaching our kids how to properly hold a bow. I kid you not, she likes to deer hunt, and she is taking our oldest out with her this fall. I worry about her sometimes, but hey, as long as she doesn't strap it on her back and take off on her bike, I won't worry about it. The clowns down at the LVPC, they should worry. Mrs redneck is like 1/16th Sioux Indian, and when she read what helen keller put up on your blog comments, she got that crazed look in her eye. One of these days she is going to snap.
Anonymity is a good thing, for all involved.
I am surprised Chris let his funny side out, but I think he could have done better than the Eagles.
Oh yeah, I used the spellcheck.

It's a good thing you did, because Lehigh Valley Redneck has a bow in her hands right now.

I fotgot to mention the barbed wire and electric fence, and the roving patrols of "Angle's agile agitators" armed with cattle prods and riding in Hummers.
How about a greater Lehigh Valley Border enforcement department? It could fall under the wings of Pennsylvania's homeland security, and when not watching the border, could do spot checks of churches where Gays "MIGHT" be getting married.
If we are going to secure our communities, we might as well let Hitler, er, I mean Ron Angle round up all the so called undesirables.