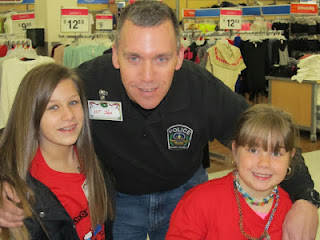 John Harmon, a SGT with the Colonial Regional Police Department and a Northampton County Deputy Sheriff, lost his battle with cancer on Thursday. I knew him in both capacities. I am sure I speak for everyone when I say he will be sorely missed.

As a Deputy, he was often inside the rotunda. That's where everyone is searched as they enter the courthouse. He was always professional with the public, never one to over-react or throw his weight around.

My first real encounter with him was during the annual "Shop with a Cop" program that Colonial Regional put on every year for area children. They'd treat the kids to Chick-Fil-A, after which a cavalcade of cruisers would escort these happy kids for a shopping spree at Walmart,

John loved doing that and made sure he brought his own very pretty young daughter to help out.

He was devoted to his family, his fellow officers and most importantly, was a true public servant.

You can read his obit here.

I have known John many years. On top of being a great Law Enforcement Officer and caring for our community he was also an exceptional human being, God definitely gained an Angel. You will be dearly missed, RIP John!

It is pretty sad that this blog was written over a week ago and has only 1 comment. It just goes to show people are more concerned and nosey about the craziness going in the Lehigh Valley than offering condolences to a true hero. Thank you Bernie for not forgetting the fallen peace officer. Sgt. rest in peace. You will not be forgotten.