Is the Lehigh Valley Just a Wrestling Powerhouse? 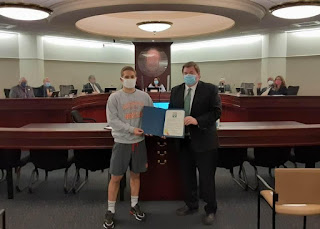 Jagger's mom and grandfather were county employees, which undoubtedly explains how he learned to wrestle.

"We're all very proud of him," said McClure.

McClure added that some areas of the state have star basketball players. Others have elite football teams. But the Lehigh Valley is a "wrestling powerhouse."

I'd say the Lehigh Valley produces outstanding athletes in pretty much all sports. You'll find them at numerous D1 schools. Allentown Central Catholic just won a state basketball championship. It did that before, when it was Michael Koury, Sr., father of our current President Judge. At that time, the PJ-in-training was the team mascot.

County Council must have been exciting last night

Gym Jordan would agree but he's too busy looking the other way!

7:44, It included a nauseatingly long presentation by Joe Welsh about some criminal justice initiative. His board includes at least two felons, including the famous Hasshan "Fuck the Police" Batts and Justan "Defund the Police" Parker. He extolled the diversity of his group, but it fails to include a single cop or DA. Joe himself has done civil rights, but I don't think he's ever been involved in a criminal case. His group is complete nonsense, but he has managed to con Richard Master into funding him. I will likely have something to say about this waste, but was too angry to write about it last night.

Jack Cuvo our finest wrassler is a shining example of why brave SJW'S like Justan and Doctor Batts fight the jack booted thugs known to many as pigs, the EAPD brutalized him in centre Square and were forced to cough up a 3 milly payout sadly the trauma Jumpin Jack endured led him to drink it all away but the point remains even Caucasian minorities such as the ginger race are mistreated by our disgusting tyrants in blue.

Hat tip to this champ and all the kids who endured the disruption and discombobulation of this season.

District XI is known nationally as the hotbed of wrestling for many years. While we have good athletes in other sports, you can't say that about any other sport as a whole.

Just curious is Hasshan Batts is related to Qu’eed Batts.

Lots of young men from this region placed in the state tournament. Good to see! Having been an assistant coach for some of them I can say that I am not at all surprised. We breed wrestlers here.

Wanted to hear about the trails and parks on video. Instead I almost died listening to solar farms. That dragged on forever. What the hell does the county have to do with solar farms? Then I learned Zirinski set it up so then I realized it was another waste of time. Don't know if they ever got to the park and trail presentation. Why spend all that time on goofy stuff.