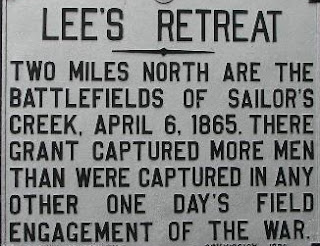 President Joe Biden has said it's "time top heal" after four years of vitriol and hate from both sides of the political spectrum. He has missed a few opportunities to bring us together, but I believe he's sincere. I certainly hope so. Many of my closest friends are die-hard Trump supporters. Although I'm unable to understand what seems to me like a cultish obsession, these are good people. It is my fervent desire that we come together and recognize we are all Americans. That's why I thought I'd share with you a bloody example from our Civil War - the Battle of Sailor's Creek.

It was April 6, 1865. The once proud Army of Northern Virginia was starving and battered. No longer able to defend Petersburg and Richmond, General Robert E Lee was making a desperate attempt to move his shattered soldiers west. It was his hope to hook up with General Joseph Johnston and the Army of Tennessee. Nipping at his heels were several union armies, who cut off most of Lee's escape routes. He was forced to use slow secondary roads with bridges that collapsed as his wagon trains attempted to cross.

At Sailor's Creek, much of what was left of his army was destroyed over 1.5 hours of bloody fighting at the end of the day. Over 7,700 Confederate soldiers were captured and 800 more were wounded or killed. Lee lost nearly all his artillery pieces as well as his wagon train.

In the vanguard of union soldiers slashing away at rebel forces was none other than General George Armstrong Custer. After the surrender in battle, Custer insisted on feeding and housing nine Confederate officers in his tent that night. He dispatched his own doctor to treat one Confederate general suffering from malaria.

Other union soldiers followed Custer's example. After an hour and a half of brutality, the very cavalrymen who had pursued and dogged the rebels for several days, treated their foes with decency and honor. They did everything they could to feed their Confederate counterparts. They'd empty their haversacks and would even go without food themselves.

Rebels disliked Pa. Germans and considered them the most brutal of all union soldiers. One rebel was surprised when a "big Dutchman" emptied his haversack and gave all his food to them. "I'll get more," he promised, and did.

One rebel reports that, in the height of the fight, his gun jammed. He discarded it and jumped into the creek for a drink. When he got out a union cavalryman was there. "Are you hungry, Johnny?" The union cavalryman was carrying a small ham and cut off a slice for Johnny, then rode off.

The next morning, as Custer rode off in pursuit of Lee, he and his staff bowed to the Confederate officers. The remaining rebel prisoners erupted in delight as Custer had his band play a southern tune.

The day after such a brutal battle, these former foes were able to treat each other as Americans. We can do that, too.

3 days before Appomattox and Lee surrenders ,really no court house. This is history that should be known by us all. There ARE some lesson learned from your post Bernie .

Attributed to Mark Twain — 'It's easier to fool people than to convince them that they have been fooled.'

The surrender of the Army of Northern Virginia was a military event that occurred after that army fought very well in a military sense for several years but was eventually soundly defeated in battle by the Union forces in April of 1865. Unfortunately although the issues of the defeat of regional social and political separatism and guaranteeing the rights of African Americans to fully participate in US society were advanced by the Civil War, they were far from politically resolved by the Union's military victory. Joe Biden unlike the 1865 US military, only won a relatively close victory in an election but several of the political and social issues including race and separatism that were left unresolved by the Civil War still haunt this nation. The Biden victory did not end many of these volatile political and social issues. Until these matters are resolved in some sort of political and social manner that is accepted by an overwhelming majority of the US population, I don't expect a new era of national reconciliation to occur. In many ways the US political and social conditions existing in 2021 remind me more of 1861, than they do 1865.

As a combat veteran I never fully understood the gravity of this statement until after I was in the middle of some stuff.

The soldiers you appreciate and honor the most are the ones that stood the toughest and fought the hardest against you! And those that battled along your side.

However today we encourage failure f'ups and fools to be rewarded for the lies that they tell and the falsehoods they perpetrate. Ask yourself Do they think about themselves first? Or if you would trust the person you idolize with your wallet with you life or your families life. Would he/she sell you out for his/her own reward and false life? Would you trust the person to be in your house when you were not there? Would you trust the person with a personal secret? There are so many more questions that can be added to this list each person has their own. Few people actually ask those of those in power or leadership at any level.

If those questions started to be asked and honestly answered there would be a entirely different perspective on our country, our region, and the Lehigh Valley.

Biden will in no way bring this country together--nobody will be able to accomplish that.