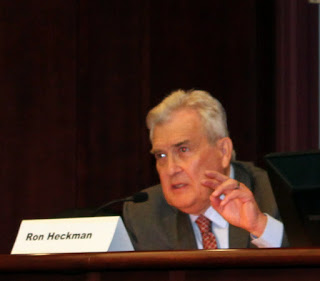 From Ron Heckman: I am seeking re-election to Northampton County Council in the spring primary election on the Democratic ticket.

County government is a predominately service-based level of government. Council must do their job with professionalism and in an efficient and cost-effective manner while also doing their homework and asking tough questions.

My record has been one of providing the most effective county government possible for the least amount of taxpayer dollars. During my three terms as councilman, I never voted for a tax increase. I voted to eliminate the personal property tax and reduce the county’s real estate tax burden. I also wrote the county’s first Farmland Preservation Resolution as well as the Local Labor Ordinance.

As your County Councilman, I am determined to focus much of my energy on the needs of the Department of Human Services. We must ensure that the county’s nursing home, Gracedale, is properly maintained and supported. We also must ensure that services vital to our most vulnerable citizens are protected and delivered efficiently. During this Covid-19 pandemic, the county faced numerous challenges and council responded vigorously.

My background as the past president of county council and as a former Director of Northampton County’s largest Department (Human Services) has given me a strong understanding of the need to monitor public tax dollars in an effective manner. If re-elected, I will again put my experience to work for all the citizens of Northampton County.

Blogger's Note: I've already told you Ron Heckman has filed his nomination petition, so his announcement is a formality. You might have the impression I dislike Heckman because I often am critical of his musings, but I intend to vote for him. He and Republican John Cusick are the two members of Council most knowledgeable about the inside workings of the county. Heckman actually has an edge over Cusick because Ron also worked for eight years as the Director of Human Services.

In addition to his knowledge, Heckman is one of the few Council members who understands that it is Council, and not the Executive, who is the governing body. Unfortunately, and this is with all levels of government, legislative bodies have been all-too-willing to abdicate their powers to an Executive. This is completely contrary to what the founding fathers wanted.

Finally, I think Heckman comes closest of all Council members to demonstrating the qualities of "mercy" and "justice" inscribed on the county seal.

His loud protests over the Gracedale horror were stunning and brave. He spoke passionately for the families of those imprisoned there and dying unaccompanied by family and friends - all as a result of Wolf decisions.

Oh wait a minute. Ron said nothing - not a word - while the death toll climbed. He never criticized anything, while parked comfortably at home binging Tiger King on Netflix and feeling good about closed sliding boards. No sitting member of council deserves a single vote for re-election; least of all those who purport to be merciful and just.

Oh wait a minute ... you are full of shit. Heckman was part of a trio of former Council members who came to Council on several occasions and spoke against the sale. You are an anonymous asshole who likely supported the sale. He adamantly opposed the sale, and also lobbied against it with county administrators. He was joined by Rich Grucela and Jerry Seyfried. You are being dishonest. The sale was widely opposed by most Dems and widely supported by most Rs. I am a Dem who supported the sale. Peg F is an R who opposed it.

Is your vote a “Hobson’s choice “? Too bad Hobson chose not to run

9:08 you mean a Cornelian dilemma?

We also need new thinkers like Tara Zrinski on county council as well Did you post her announcement.

Zirinski is really great just ask her. She loves to tell you.