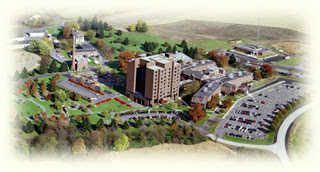 As a result of a Memorandum of Understanding (MOU) with AFSCME, Gracedale plans to start offering sign-on bonuses for new hires at the nursing home. AFSCME is the bargaining unit representing most Gracedale workers.

Sign-on bonuses of $500 will be provided to new hires in dietary as well as CNAs and LPNs. The money will be payable in two $250 installments at the end of three and six months. Employees who are disciplined during this time period will be ineligible.

This sign-on bonus is set to expire in June.

RNs are represented by the Steelworkers' Union. It's unclear whether there are negotiations for a sign-on bonus.

NorCo Council ratified this MOU in a 7-1 vote, with Council member John Cusick voting No. He voted No because he believes the bonus should be higher. Council member Peg Ferraro was absent.

In other Gracedale news, Director of Nursing Dawn Tuersfeldman advised NorCo Council on April 1 that she has conducted a review of 220 open positions at the nursing home.  She is recommending the elimination of 135. She explained these positions were created at a time when the nursing home had 801 licensed beds. Now the max is 635 688.

In her report, Gracedale Administrator Jennifer Stewart King reported that census dipped in January and February because of the nationwide surge in new Covid cases. She said that the number of residents at the home returned to normal in March and currently stands at 503.

She is hopeful that visitations can begin begin in May.

As long as checks from the federal government and enhanced unemployment is in effect, $500 is a pittance. after all summer is coming, time to have fun and enjoy the outdoors, maybe think about work in september, unless the checks are still coming, then who knows.

Lets see, we have rent moratorium, unemployment may be 700 or 800 a week, checks range form 1400 to up to 6000 or 7000, talk of beginning monthly checks, maybe work will become no longer necessary.

Thank you for the proposed correction. Unfortunately, I have to check the video. I took notes, but have displaced them. If you are correct, and I think you are, I will correct my post.

Wouldn't the county be better off if Gracedale is sold?

I have reviewed the video and Jennifer Stewart King stated that Gracedale maximum bed capacity is 688, not the 635 I erroneously reported. Thanks for setting me straight.

I decline to publish comments that refuse to refer to Dr. Levine by her name. Feel free to attack her competence, but her transgender status is irrelevant.

Run it well like other counties or sell it. Have a plan like lehigh county. Incompetence should not be rewarded with tax payer dollars

When McClure booted the private manager running the place all Hell broke loose. McClure is a controller and the private firm would not hide information from the council and people. Now McClure controls what happens and is said about it. This is sad.

Consistent with other industries. Good.management.

And don't forget about all the politicians that are using government money to pay companies so in turn companies can pay them. Think of Don C giving Fuling Plastics lots of money through low interests loans and other perks through his role at LVEDC then being given a nice Board position where Fuling pays him. not illegal but very very bad except for him. And how many other politicians in the valley and government officials are doing the same thing.

Nursing home shortage is because the County treats them like shit. If it didn't, you wouldn't need to pay to a sign on bonus. Ask any Gracedale employee.