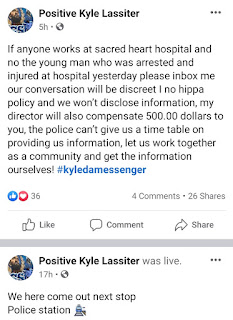 Positive Kyle Lassiter, aka Khalfani Lassiter, claims on his Facebook page that he works at Promise Neighborhood. That's where ex-con Hasshan Batts is Executive Director. On July 11, when Batts was leading a mob with "Fuck the Police" chants and Lassiter was dutifully shooting video, they were both trying to determine the identity of Edward Borrero, Jr., the coke and heroin addict who was puking and staggering outside St. Luke's Sacred Heart campus. In fact, Lassiter said he was authorized by Batts to pay a $500 bounty to anyone at Sacred Heart who knew Borrero and was willing to rat him out.

Releasing a patient's name without consent is, in, fact a HIPAA violation.

It's HIPAA. And disclosing private health information and identities is a felony under
federal jurisdiction. HIPAA felons may be fined from $100 to $50,000 per violation and may get jail time (1-5). There was certainly a conspiracy to commit a felony. Good thing someone kept the receipt.

I accidentally deleted a comment that calls promise neighborhood a shady organization that has become radicalized. My apologies

Who founded this Promise Neighborhood group?
Where do they get the money to pay their staff and run their shop?

It’s all about the funding! If Batts’ group receives funding through one of BLM’s many sub groups, his ultimate goals are probably less about his local neighborhood and more about influencing the next election in order to remove Trump and quicken our decline into a Socialist nation, moving further on to Communism.

Indeed, there is an internationally funded attempt to bring down America. His group produces no retail product for sale and profit. Salaries, office expenses, travel, etc. are all paid through donations. Some freely given by well-meaning individuals, others by clandestine organizations. Over time, similar groups have used shakedown tactics, using threats of being called a racist person or group. Never fall for that garbage if you are confident and comfortable about the way you’ve lived your life.

That was my post! Yes, Batts and his organization Promise Neighborhoods should be investigated by the IRS and Pa. Dept. of Revenue for its non-profit status. They have become highly politicized and radicalized. They solicited a crime by asking hospital personnel to violate HIPPA. Was the $500 bounty to come from the non-profit's funds? If so, that could jeopardize their status. The organization has done some good in the community, but now Batts' shady past is rearing its ugly head.

Sorry for the accidental deletion. I’ve grown very leery of that group

Part of what’s sad about items of this nature, neither the Morning Call, nor TV69, will ever investigate to better inform the public. Even if they do inquire and get more information, they will screen out anything that doesn’t fit their own political bias. We are far removed from straight reporting.

I’m close with someone at Promise Neighborhoods, and this my understanding. Husshan Batts likes to think he’s still a shot caller for the Bloods and Latin Kings. He thinks he can use his influence in those gangs to turn violence up and down in the city as it fits into what ever narrative he’s pushing and help him secure funding. He thought last year that he could turn stop all violence for 30 days, by his own executive order, then people would have no choice but to give him funding. The problem is the ex gang members he has working for him were never high ranking in their respective gangs. Also the Bloods and Kings know Husshan Batts was busted as the head of a multi million dollar drug operation, and multiple semi automatic rifles and $50,000 cash in his house. And you don’t get a prison sentence as light Mr. Batts without “snitching” on someone. My personal theory is Batts never called for defunding police before this because he knows, like his friends in NYC are finding out, that as police presence goes down, gang assassinations go up.

Lassiter is quite the scribe! Is he employed by Promise Neighborhoods? If so, their standards are in the gutter.

If u contributed to United Way u funded team Batts.

The “Our board” page on Promise Neighborhoods website doesn’t open.

The "Our Board" Page opens now.

Y is anonymous allowed to comment. Be proud if who u are O'hate and don't hide behind a fictitious account

Unknown wants to know why I allow anonymous comments, lol. And to be clear, I only post as me.

Anonymous stop lying u are not close with any1 at pnlv. Ur info is off. Yeah u have some public knowledge but yeah just stop it. Bitter ex employees will always have something to say.
I'd like to know what are u guys doing to better any situation?