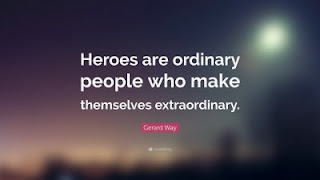 As I write this essay (Sunday morning), sparks of lightning are flashing and I hear sirens in the background as police and fire respond to an intense storm. These, and not social workers, are who keep you safe. A small segment of our society, including ex-con "Dr." Hasshan Batts and some members of Allentown City Council, say "Fuck the Police." They are out of touch with their own community. Allentown's first responders actually have a better understanding of what bothers everyday residents than the demagogues and opportunists behind the megaphones. It's not police. It's fireworks going off day and night, even now. It's dirt bikes and quads tearing down Ridge and Hanover Avenues, ridden by kids who do not even look when they pour into heavy traffic. It's a drunk passed out in the middle of Hamilton Street, who responds with a "Fuck you!" when told he is blocking traffic. It's brazen drug dealers and gangs crawling out from under their rocks in darkness, lighting up the night with gunfire.

Ce-Ce Gerlach, Joshua Siegel and Batts, with the assistance of The Morning Call, have attempted to turn Edward Borrero, Jr, into a hero. On July 11, he had taken seven bags of heroin as well as cocaine, and was stumbling and vomiting in the street outside Sacred Heart (St. Luke's) Hospital, presenting a danger to himself and others. He has a lengthy criminal record that includes possession and use of drug paraphernalia, possession of controlled substances, public drunkenness, retail theft and criminal trespass. He's well known to police, and not as a hero. Gerlach and  Siegel actually apologized to him, exposing the city to civil liability in the inevitable lawsuit to follow.

Want to talk about heroes? Let's start with an incident from about three weeks ago, a story that will never make the pages of a local news story. A frantic couple dialed 911 to report the worst nightmare that can befall any parent - their 12-day old infant had stopped breathing and was in cardiac arrest. A call like that merited and received an "All hands on deck" response. Police, firefighters and EMS were all dispatched. The first to arrive was a police officer. This couple could only speak Spanish and the officer could only speak English. He immediately went to work, using the skills he learned in training to save the life of this baby. When firefighters arrived, the police officer was visibly shaking and extremely concerned, trying to save another person. Color and language barriers made no difference. A young life was at stake, and this cop cared about that life.  Miraculously, the breath of life returned to this young soul. This story has a happy ending,

That unnamed cop is a hero.

Allentown has lots of them. People just don't know where to look.

Wanna' talk about heroes? Let's continue with another story, this one not so happy. Four people, including three firefighters, were injured last week while responding to a blazing inferno at the 700 block of Allentown's North Fair Street. Two people died in the fire. Those at risk were part of the Queen City's majority-minority population, but that made no difference to the first responders who put their own lives on the line. There was no systemic racism or police brutality.

There was a hero among those who lived there, too. A 17 year-old boy lowered his two sisters from a window and into the waiting arms of Allentown cops as flames ripped into his back. He then jumped, breaking both legs. He is currently hospitalized with third degree burns and compound fractures.

A GoFundMe page has been set up to help this family defray expenses, which unfortunately include funeral expenses. Allentown's firefighters kicked in $500. I don't see anything from those who want to fuck the police. They're busy establishing a bail fund.

Now, about supporting Law and Order.

You are certainly correct in your respect and praise for police and other first responders. We need these brave souls more than ever. Today, we have situations in several large states and cities where the politicians in charge as Governors and Mayors refuse to not only support our heroes, but also not protect their residents. Those fools are either ignorant or highly partisan operatives who think this is a way to influence the next election to their desired outcome.

This destruction of Law and Order must not continue!

Those who support, and even just remain silent, must be rejected at the next election.

Or the passing motorist & police officer who dragged my handicapped brother out of his burning house last week. If not for them, my brother & his family would've perished- real heroes!

It is a sad commentary on the view of these leftist organizations that the best they can do to promote heroes in their community are people like George Floyd and your local drug dealer.

It is a fact that when individuals in the community strive to learn real marketable skills and a lawful and respectful attitude they are persecuted and attacked, often their property is vandalized.

So is the enemy white people or is it any responsible law abiding citizen.

Or the police officer who helped drag a handicapped man out of his burning house last week in Washington Twsp. Or the passing motorist who at 4;30 a.m. banged on the door to alert the family- another few minutes, they all would've perished!

4:10, let’s keep this confined specifically to Allentown. There is nothing wrong with lawful protest, even this against police brutality, even when misguided as it certainly is in Allentown. But plans to break the law, as discussed in my other story, should be discouraged.

The disgusting politicians of whom you write enjoy wide support from their constituents. Allentown is what Allentown is. They have elections and select leaders. I suspect Ed Pawlowski would win tomorrow if he could run. That's just Allentown being Allentown.

God bless, Dr. Batts and his staff.
They are the future of Allentown.
As for Josh, he will be the next mayor and it won’t come too soon.
No justice, no peace.

I corrected my mistake. Thanks.

I won't take back my assertion that the police need to re-examine their techniques for subduing citizens. Knees should be nowhere near a person's neck or throat. Protests with good motives are being twisted into opportunities for blatant political grandstanding. Unfortunately far too many regular citizens can't recognize that and are easily manipulated.

Bernie—— there is a need to dig deep and redetermine your values and political leanings. I am hearing more R thoughts than D thoughts and ideas in a number of your blogs lately. I have known you for over 10 years and I don’t think you are bi polar. But this sudden turn to the right is surprising me. But I do find some comfort in it knowing that if you are seeing the light many Democrats out there are seeing it too. I see a trump landslide coming!

My values are most closely aligned with the Democratic party. I have always said I am about 60% Dem and 40% R. I am a centrist. Remember them? I support almost as many GOP as Dem candidates. I detest both Trump AND Wolf. I do believe black lives matter, agree there is systemic racism, white privilege and recognize my own behavior has been part of the problem. I adamantly oppose defunding police and, despite what convicted felons may tell you, find that most first responders are much less bigoted than those of us who pretend we are perfect.