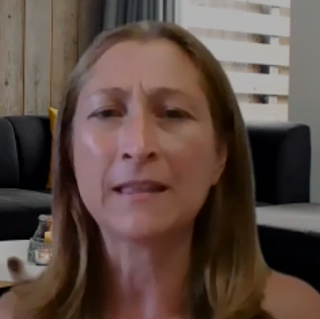 On Saturday, State House candidate Tara Zrinski hosted a Zoom meeting about "Abolitionists and Allies," focused on the Black Lives Matter movement. She said her district is "a predominately white community, and there is a little bit of pushback on the Black Lives Matter movement." she added this is "mainly because it's just misunderstood, and that's why we have to educate in our communities. And we have to educate and be leaders in that educational process." One of her guests was none other than opportunistic Allentown City Council member Josh Siegel, whom she calls "an awesome ally. He's been a leader on Allentown City Council."  He hopes to ride this movement into the Mayor's office.  He angered fellow Council members when he released Mayor Ray O'Connell's private cell phone number to an angry mob. People like Siegel or Zrinski call themselves "white allies," but they actually detract from this movement. Their antics are why President Donald Trump's approval ratings are beginning to creep up again.

Siegel noted there's some some sentiment on Council that he should be censured. Here's how he explains it (with multiple uses of the word "and")

"It's clear they are not censuring me or Ce-Ce. They are censuring Black Lives Matter and they are trying to silence us because that is what institutions of power do. They are insulated from criticism and they are naturally self-protective and self-reinforcing and they are trying to keep us quiet because the world is changing around them and these broken barriers and these broken edifices of power are recognizing that their days are numbered and they're going to do everything in their last gasps of air to keep us silent and the truth is we're not going."

If he is censured, which I doubt, it will have nothing to do with Black Lives Matter. It will be because he doxed the Mayor, who was deluged with calls from an angry mob after Siegel leaked his number. In fact, one person told the Mayor, "I know where you live and I like flames."  Any city employee who did that would be fired on the spot.

In addition to doxing the Mayor, Siegel wanted the names of officers involved with a vomiting and staggering heroin user released. Why? So they could be doxed, too? So far this year, seven police officers have been killed by ambush.

Siegel did apologize for doxing the Mayor, but in a vulgar way. "I f---ed up," he said at a public Council meeting. But that's no surprise because he was also one of those chanting "F--- the police" with Dr. Batty.

In addition, after a City Council meeting, Siegel bowed and apologized to the puking heroin and coke user, opening the city to a claim of liability.

For his part, Siegel said many fellow Council members (there are only seven) are "not just tone deaf, but completely out of touch. ...  Other members of Council clearly don't either have a conscience or frankly don't care and they're fine with continuing to have police officers put their knees on the necks of Allentown citizens. They're fine with continuing to maintain an institution of policing that at its very core is designed to oppress people of poverty and people of color and keep them silenced and on the streets and keep them from speaking their minds."

"We have so many great leaders. Dr. Hasshan Batts, of Promise Neighborhoods, said budgets are value statements, and I truly believe that.

"We spend $40 million a year on our police department. It's our largest expenditure, and that is a value statement. It says what we believe as a City, and it means we should police our populations, that we should invest in punishment as opposed to people's potential. That's a conscious choice, and that's a choice that's starting to change.

"I want to talk a little bit about different levers of power we can actually change, and the first one goes to just democracy and empowering people's voices because not only do we need to decolonize the education system, but decolonize the political process.

"I'll give you an example. So many donors, people who give money, are white, older men and they try to control the narrative by the money they dispense with and I can tell you that donors have reached out to Ce-Ce and myself, and they have expressed reservations and basically implied that money would cease coming or we could no longer count on their support if we continued on this course of action. The truth is it doesn't have to be that way because we can divest from our police department and invest in a voter voucher system. We can actually give each individual citizen of Allentown a voucher so they can fund candidates of their choosing. We can break the barriers to political entry so it's easier for people of color to run for office because they can actually be supported, financed and strengthened by the members of the community they actually represent.

"Another conscious choice we can make as a city that we can fight for, that we can do without state action or federal approval, we can do that here in Allentown, is we can choose to invest in education. Allentown is one of the most underfunded school districts in the nation and certainly in the state, and we can choose to take money from our police budget and fund universal pre-K education, make sure every child has a great head start, 95% of our kids have a brain that's developed before they are three, we can make that investment in our youth by taking money out of the police budget and investing it in kids when they're young.

"There are alternative pathways to public safety, and that's truly what this moment calls for, and I think what being an ally calls for is challenging those notions we've had since we're young.I know growing up, we were always told that if you have a problem you call the police, that the police keep us safe, that the police do this. We have to have the courage to be introspective and search ourselves and realize that is born of our own experience. When I call the cops and they show up, they're personalizing that I'm a threat. Their first thought is how can they help me, how can they aid me and assist me because that is how they're trained. That's their internal bias. And we have to, certainly as white allies, recognize that those notions, those conceptions, those paradigms that we've been entrenched in since we were young, are wrong, they're built on racism, they're built on problematic social customs. We have to have the courage to tear that system down and rebuild it and that might mean sacrificing my future career. ...

Where did this Siegel come from anyway? What a nut job! What is wrong with the people of Allentown, that they would put such a buffoon on city council?

Great, another entitled liberal white lady progressive that needs to "educate" people to stupid to understand life. She is a disgrace along with her Allentown heroes. A friend claims she thinks as a state representative she can make her district an experiment in tolerance. She was recently in Emmaus for a rally with her new heroes. What does Emmaus have to do with her District. She plans on making a change to the county to emulate Allentown.

This woman is your typical arrogant know it all who thinks she is better than the people she wants to represent.

What makes this even funnier is that he serves on city council in a city that has enacted every single tenet of the stock, progressive agenda. Does he realize what a caricature he is?

i sincerely hope so

Black Lives Matter is an international organization. The people in charge are on a mission far beyond what it’s seemingly worthy name suggests. Average, everyday, Black Americans are being used as pawns. The BLM organization includes hundreds of individual Chapters found in American communities using different names. Billions of dollars from around the world are being funneled through these smaller constructs. It’s all been going on for decades.

Possibly, Mr. Batts and his group are directly involved in this network. The same network involved in equipping and funding violent paid agitators. Many of our elected officials take donations from these groups. Politicians become ‘bought-off,’ so to speak.

Yes, some of those Conspiracy Theories being downplayed all the time, are actually true.

I inadvertently deleted this:

i sincerely hope so

Bugsy Siegel is a Fruit Loop. How did this nut get elected? just shows that a bag of rocks could be elected in Allentown is it had a "D" behind its name.

Josh is desperate to politically neutralize Patrick Palmer. Josh thinks pretty soon his name will be more synonymous with Black Lives Matter than Patrick’s. Joshua Siegel hopes to one day be referred to as the first Black Mayor of Allentown. Ask him about it, he won’t deny it. And ask him what he said about Rodney BE’s lack of a criminal record. Josh is a real class act alright, Mr. BLM.

Tara Zrinski is a great ally who is media/tech savvy and bound for higher office in part because she is so well informed through the daily consumption of BBC and other immersive endeavors into the black experience.

living in an apartment on the East Side of Allentown , Siegal promised to be its voice ... At this time I don't believe he had made that a priority as a sitting Councilman.