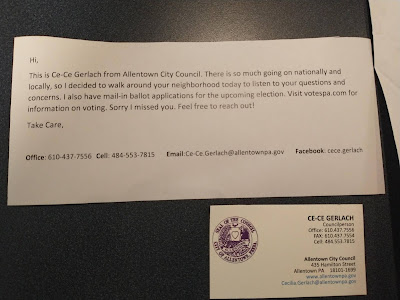 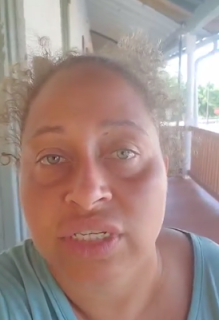 At last week's Allentown City Council meeting, member Ce-Ce Gerlach invited both other members of Council and even the public to reach out to her. I did. I have yet to hear back from her or her fellow traveler Enid Santiago. They display the same transparency that Edwin "Fed Ed" Pawlowski did. None. But then again, I'm unable to vote for her.

Over the weekend, Gerlach was making the rounds in Allentown's west end. She dropped off a nice little note with her phone, her Allentown City Council card and applications for mail-in ballots.

Gerlach is trying to drive up turnout,. which is a good thing. But she's also attempting to increase her own name recognition. Why would she be doing this? According to several sources, it's because she plans to run for Mayor.

She's got time, too. According to her Facebook page, she worked (past tense) with a mental health provider. Aside from her gig on City Council, my guess is she's unemployed.

Oh please. Nice woman but an empty tin can. But all she has to do is win the primary. A bag of rocks could be elected Mayor of Allentown if it was democrat.

At least she is honest. You trash her so why should she communicate with a phony like you? Your "transparent" heroes know if they feed you prepackaged stuff you get all lovey so they have you.

What a farce. Give it up already! Keep blocking the majority of comments that call you on your bullshit. It makes your unstable mind think you are respected!

If she can live on a City Council salary she may be just the person to run Allentown.

Why not? Given Allentown's recent streak of crooked mathletes, they really can't do much worse. If you really think about it, she perfectly represents Allentown's electorate, who would jump at the chance to re-elect Pawlowski, were he permitted to run.

She worked with a mental health provider as a client receiving treatment for unaddressed multiple personality disorder during her transition too a person of substance.

How does she support herself?

Please tell me you are kidding! First, on the school board, Ce Ce runs the school district into the ground with $10m to $25m deficits every year. Then, she gets on City Council and in 8 months, blows that up to the point where her fellow City Council members won't even speak with her. Now she wants to be Mayor??!! Like you said Bernie, she has absolutely no qualifications to run anything, let alone a City with a $100m budget!! This shows her fundamental disrespect for Allentown and total lack of caring for anyone but herself. To put herself in a position in which she will destroy this city and, inevitably, raise taxes so the poor have to leave their homes is pure egomania and selfishness.

She may have a job, but my impression is that she does not. It was one of the questions I intended to ask.

Unless someone of substance steps forward, claim your prize Allentown!

If she were Mayor, it would be like a toddler running a nuclear power plant....it's not if a disaster will occur but when!

Anon 4:01 Being honest is not the only criteria to being Mayor. You also have to be competent and Ce Ce is definitely not that!

I watched a video on Facebook about a week ago with Nat Hyman. He seemed to indicate he might be willing to run for mayor again. If this were the case voters would be nuts if they left this opportunity pass them by a second time.

No, she's not. If she refuses to return a call after inviting them, she is not honest.

This would be a disaster, how humiliating for Allentown. Allentown residents with a clue need to be very concerned about this. This City has a lot going for it and I'm optimistic about the future, but Gerlach only needs to get the most votes and I think she can! We will be crying for a return to Fed Ed, even the con man Roy Afflerbach and his pension handouts and what the heck, the original culprit Joe Dadonna. I can't even imagine the shame we all feel if and when she is managing the city. Wow.

LVCI: I saw the same video and agree with you 100%. Hyman For Mayor!

This would be Far worse than Fed Ed. At least Ed had some management expertise and brains. This would basically be putting an imbecile in the office. Hugely embarrassing for Allentown that she would even run.

I am always amazed at people like Ce Ce who run for Mayor without any managerial or finance experience. How could she possibly think she is up to this job? It is one thing to be in a position like school board or city council where you just vote on things. it is a whole different world to be in charge of our tax dollars and have to balance budgets and manage 800 employees. She is so selfish!!!

Donald Trump might be available next year. Get him to move here, maybe Pat Brown can get his Patron to give Trump a building or two. Maybe the old State Hospital property? Make Allentown Great Again! He can even reuse the hats!

This thing is the monster of all Allentowns nightmares! And I use the word thing with all the kindness to things all over the world especially the Adams family thing.

Well there's the final kick in the groin that Allentown's been waiting for!

If she is unemployed that explains why she can't afford a properly fitted bra!

Someone wants me to host a comment, and starts by insulting my blog. If it is so bad, do not post here, especially on a Sunday.