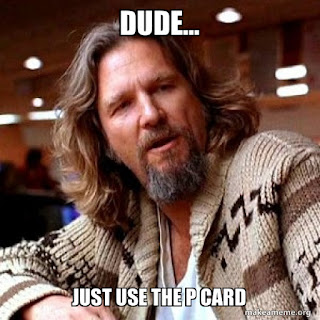 Back in 2017, when he was Controller, Steve Barron conducted a devastating audit detailing abuse of the county's credit cards, called P-Cards. He noted junkets to Vegas, New Orleans, Atlantic City's Harrah Resort and other posh destinations by some county employees. He also noted meal purchases in violation of Northampton County’s Policy on Travel, Meal and Mileage Reimbursement (Code 3.708). P-C were also being used to purchase gift cards, which were then handed out like candy by former Human Resources Director Amy Trapp. Barron has since moved on to become the county's Director of Fiscal Affairs. A recent audit of the county's P-Card purchases reveals improvement, but there are still problems.

This audit was conducted by NorCo Controller Richard "Bucky" Szulborski and his lead auditor, Kathleen A. Kuzma. They took samples from o 6,257 transactions over a 15-month period ending exactly one year ago.

1. Some P-card transactions failed to have appropriate documentation, were not properly and were beyond the purchasing cut-off date for 2017.
- Of 125 transactions selected for testing, 20 that were approved by a proxy authorized signer that was not on the Fiscal Affairs authorized signer list. Eleven approvals were later found on uploaded documents.
- Eight cardholders were improperly set up for "automatic" approval.
- There were 242 transactions after the cutoff date for 2017.

2. Some P-card transactions failed to comply with county purchasing policies.
- Two of 125 sampled transactions failed to use an approved vendor.
- Four of 125 sample transactions included a charge for sales tax even though the county is exempt from sales tax.
- There were eight gift card purchases. These are still in use for participants of Drug Court as well as some clients in Human Services. Only one lacked proper approval.
- All transactions were within the cardholder's limits.
- Of 438 weekend purchases, 10 were selected. All but one were valid purchases. The improper purchase was a $25 baggage fee for the spouse of an employee. That employee no longer works for the county.
- Of 19 charges for air travel, five were selected for testing. One of these was an inappropriate charge involving air travel of a
spouse of an employee while traveling together. This was picked up by Fiscal Affairs and the employee reimbursed the County for the air fare of the spouse.

3. Employee meal purchases.
- Of 15 transactions for meal purchases, one was for a gift card and another for a non-food item. Three purchases exceeded the county meal allowance. Seven meals were purchased even though there was no travel, which violates county policy.
Posted by Bernie O'Hare at 7/30/2019 12:00:00 AM

Why weren't they denied payment the boss and Disbursements?

So we are suppose to hand this guy a trophy and his assistant because they did the job the taxpayers pay him to do? He is not doing anything other then what he is paid to do. Why is this even news? And why only 125 transactions? It shows the executive needs to do a better job with his staff does it not?

Another round of the county executive is a goof and his department heads are not doing the job. Whoever departments screwed up should be fired. Its the taxpayers money. Maybe then we can hire some staff to care for the old forgotten people that were dumped at gracedale by the loser families.

Unless you left something out of your article, I would be concerned about fiscal policy in the county and the Controller.

First, where is the follow-up?

Out of ten weekend purchases that were tested, one was determined to be invalid. That's 10% of the sample.

Of the five charges for air travel that were tested, one was determined to be invalid. That's 20% of the sample.

Given the small sample sizes, I would think that all three of those areas would have warranted additional scrutiny and the sample size should have been increased to determine if the results were representative of the entire transaction type.

If the results ARE representative of what's going on, I'd be VERY concerned about the way the county credit cards continue to be used, particularly for certain types of transactions.

I don't know if these results were presented to Council, but if the post is accurate, they should be asking hard questions about the county's fiscal controls and the audit staff.

Businesses would react with warnings and firings. How will county government react, as chickens ultimately watch that hen house?

8:52, this report was just released Friday and has yet to be reviewed by council. You got it before they did. I am sure there will be questions. As for increasing sample size, that’s a good point. The lead auditor is pretty adept at these things and she might want to do this.

Bethlehem Twp has a p-card spending problem but everyone is asleep at the wheel.
Former long term employee!

Can we get Jake Towne to sort this all out for us?

Very simple explanation our system breeds corrupt politicians it has been going on for years and any sane person realizes this it will not change politicians are very bad and corrupt people get rid of the money if possible and put down term limits and make sure the deep state people have limits on their of service it's the only way to go.

exactly what it means- P card= Pissing away my tax dollars

I know of an instance where a public employee was on business travel and running late becuse they tended to a work issue. They grabbed a smoothy before going into a morning business meeting and accounts payable refused to reimburse because it was not considered a food item. Scrapple and a fat greasy omelette loaded with home fries at $11.99 is acceptable yet a $3.99 smoothy is verbrotten. IMO, that was an example of an unreasonable rejection. Common reasoning should prevail. But hey, popcorn is a food item.

Ron Angle would have been all over this like a hound dog on a rabbit. Where, oh where, is he when we need him?

Angle would figure out how he could make money off of them.

like to know how certain "employees' were allowed to make such open purchases. When I was employees here everything was restricted use by MCC code and or category coding. Never had a open card as some apparently did. Made my job harder while the special people could apparently do whatever the hell they wanted. Pitiful. Make those who violated the code pay it back.