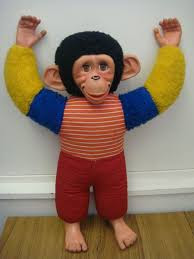 Jacko the Monkey here. Remember me?

Not long ago, I escaped from my dark closet at the Northampton County Courthouse to complain to you. I was being dragged into the dirty world of Northampton County politics by none other than that bottom-feeding blogger, Bernie O'Hare. He really is "a disgusting, gruesome creature," as West Easton Borough Constable and Tom Carroll for DA supporter Tricia Mezzacappa recently told Bethlehem City Council.

Look, my idea of a good time is throwing poop, swinging on trees, eating bananas and playing the accordion. I hate politics. But O'Hare was going to use me to make a monkey's uncle out of DA wannabe Tom Carroll.

Now The Morning Call has grabbed this story and there's a big expose on Carroll.

Though the paper's reporters interviewed about 10,000 people, they never got me. I stayed hidden in my closet.

In June 2007, Carroll was an Assistant DA in Northampton County. When he bought me at the Dollar Store, I thought my organ-grinding days were finally over. Little did I know he would use me to play a cruel joke on another Assistant DA who happened to be African American and female. He plopped me on her desk one day so that I would be the first thing she saw when she came in.

I may only be a stuffed monkey, but even I know that's wrong. Lots of racists were using monkeys at that time to smear Michelle Obama. They still do. This prosecutor, when she saw me, became very upset even though I am kinda' cute. She saw no humor in it.

The following Monday, I was brought into the office of the District Attorney himself. I tried explaining that I had nothing to do with this, but was unable to talk at that time. Carroll was summoned. I remember Morganelli had his head in his hands and said to Carroll, "Help me, Tom. How is this a joke?"

But what about me? I've been sitting in a frickin' closet for the past 11 years. I didn't get to throw shit, eat bananas or swing on anything.

But I have passed the bar. I'm suing everyone for violating my monkey rights.

After his incident was over, Carroll made pretty clear that no joke was intended. In addition to insulting this female prosecutor with a vulgar sexual term, he took to wearing monkey ties every time he came to the courthouse. He always made sure this prosecutor saw him.

TC really is a mess. His party boss Snover tried to cover for him by claiming republicans are unfairly targeted as racists. Yeah, the monkey was the villain.

HE WAS AN ASSHOLE FROM THE BEGINNING, SUCKED AS A PROSECUTOR!!!!

Okay so the Police Chief s wife was destroyed now this guy is next to the gauntlet. Stand by folks another political public cript is being prepared. Poor TC. Drop out now or move to Idaho!

Its amazing how dumb can't be cured by the ever popular college "education". However, I remember my years as an employee of Northampton Cty. Dept. of Human Services and the "jokes" posted online were so despicable that it provided an environment so idiots like this guy would have no qualms about his behavior. The County had the ability and I believe the responsibility to monitor the use of computers but did not address the issue. While an individual is responsible for his own behavior I also think a fish rots from the head on down.

Wow. What a disgusting person he must be.

Wait wasn't Jocko against the police chiefs wife? Oh I get it now. Destroyed her now him. Calculated! No Jocko till after the chiefs wife was out of the race now this! Brilliant!

Donate, help run a campaign. Get a job.
Reality is starting to hit the clan.

Why are these people so fragile?

They destroy themselves. You can't shine sh..well,you know.

JM allowed this behavior? Why was he not charged? JM permitted this?

Bernie that damm Jacko is a real while in the closet did he hump the pig before you kick it to it's demise? Really love the third person articles Jacko Mr hidey hoe can add humor to the story while being a truth Sayer.

”JM allowed this behavior? Why was he not charged? JM permitted this?”

He did not permit this. In fact, the very next day, Caroll was gone. As for crimes,what law was broken?

Why would Mr. Caroll subject himself to the exposure of this past incident.Surely Mr. Caroll knew in this time of social media this incident would re-surface

This guys campaign is (and should be) effectively over I hope. What an embarassment.

Racism should be illegal and he should be locked up for this!

When a white male presents a monkey to a black female... its harassment and ethnic intimidation. And the pattern of conduct which there is more

It is not harassment unless there is a pattern. There might be a pattern with the ties and other nonsense, but that was after Carroll had resigned.

Carroll ‘s personal life is irrelevant, unless he is screwing chipmunks.

One thing can be gained from Carroll remaining in the race. We'll have a pretty good idea of the number of racists and bigots in Northampton County, which will also be the number of votes Trump will receive.

Can Jacko provide details on the amount of the settlement the County paid for Morgenelli discriminating against a black corrections officer who was denied a position as County Detective based on his race. Please ask Jacko what this cost the taxpayers of Norco County. Morgenneli and Carrol should work well together, Bernie, if you are going to attack one for being a racist, the settlement by the County is fact that it believed Morgenelli was racist in his decision. You make a big story about Carroll, but it cost the taxpayers nothing.