Following a summary trial before Magisterial District Judge Ronald S Manescu, Allentown Democratic operative Ed "DisGrace" DeGrace was convicted of summary harassment yesterday over a punch he threw a few weeks ago at a fellow Democrat. He was fined $100 and ordered to pay costs for a total of $301.25. He was represented by Attorney Gavin Holihan.

I was unable to attend the trial but spoke to several people  who were there. From what I understand, Magisterial District Judge Manescu was only interested in the incident itself, even though victim Tom Osborne was prepared to call several witnesses who would say that DeGrace admitted he had struck Osborne.

Osborne testified he was punched by DeGrace, who denied it had happened. Judge Manescu chose t believe Osborne.

Prior to the trial, Osborne stated DeGrace was waiting for him outside the Judge's office and said, "Trust me Osborne, if I hit you, you wouldn't be able to open your mouth."

During the trail, DeGrace had accused Osborne of having made racial comments about him. 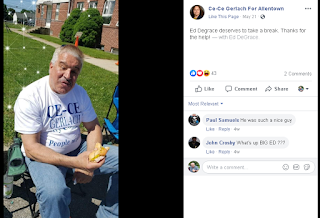 Ed "Disgrace" DeGrace is pretty much a wannabe thug who uses threats, intimidation and profanity to silence anyone who dares disagree with him about anything. His antics are well known, and yesterday's hearing was attended by several people he has victimized in the past.

Despite his sordid reputation, Ce-Ce Gerlach was only too happy to use him in her Allentown City Council race, and even complimented him on Facebook. I have also learned  he is a CCD instructor at St. Thomas Aquinas. Doesn't the Catholic Church have enough problems without letting this foul-mouthed thug teach catechism to children?
Posted by Bernie O'Hare at 7/10/2019 12:00:00 AM

That’s perfect ,a filthy pig teaching caticizm to children . This has the same backwards,none thinking as free stuff to illeagle migrants , teachers in California wont notify parents that daughter gets abortion during recess , living on fault lines ,smoking while doing a refill of your lawn mower ,it’s all poetic justice.

“Latinos For A New Lehigh Valley”.
The future is now.

Guys like this usually have small balls, glass jaws, and funny high-pitched squeals when they're writhing on the ground in the fetal position. The parish needs to immediately jettison this violent, filthy-mouthed idiot.

Rev. Greg Edwards is going to launch a new day in Democratic Party politics in Lehigh County.
The Progressive wave is about to arrive.

I am sure those that end up under cover of the church were working with epstien and the democratic party at one time or another. This could be the white sex slave gang that a local individual said she was enslaved by in NY.
All life long heathens turn to the church before getting the send off to there maker.

Now Mezzacappa and The Blog Mentor need to be brought to justice. One down two to go

Ed DeGrace is a respectable and longtime member of the Democratic Party in Allentown.

It's hard to believe this drooling violent imbecile is permitted near children. Will Gerlach step in to protect the children?

1:00pm There is nothing respectable about democratic party in Allentown. You don't see the O'Connell for mayor beneath the Manor Care billboard at Jandle bypass and rt100. How easily Fed Ed and the criminal Enterprise forget the covers were only slightly pulled back in round one!

Quit slamming an entire group over one thug. You point to DisGrace, and I can point to Mezzacappa.

Keep coming at me Bernie, you disbarred, disgraced loonie from the boonies. you've got nothing on me and I've kicked you're ass sideways anytime we've crossed swords. What a huge NEWS baron. Frothing over a neighborhood dispute. Man you're changing the world. Oy Vey! Loser!

DisGrace, I always find it refreshing to see a bully like you put in his place. Long overdue. And the only time we've crossed swords, you've been publicly embarrassed or asked to leave. You are a punk.

Ed it was not a neighborhood dispute!!! You are a unhinged Thug!! The only thing I can say is Karma is a Bitch��������

Yeah as respectable as a Thug .

Bernie you said you would face him at the hearing then you didn't go. Why not?

Okay Bernie, I guess I take it back then. You truly are a Disgraced, Disbarred, Obnoxious, Desperate Buffoon, Pathetic, "Loonie from the Boonies", News Baron, changing the world. My Bad! Great Work! Bring on the Karma!

Ed DisGrace you were my favorite troll back in the day, where is Lagata84 been hiding?

Ed DeGrace is hung like Girth Brooks and has gaped more holes in Palumpas rumpus room than the ex-mayor has lifetime!

Thanks, Ed DisGrace, Resign as a CCD teacher. The Catholic Church has enough problems right now.

"Bernie you said you would face him at the hearing then you didn't go. Why not?"

So the guy lies to children...this story could have just lead with that fact, everything else could have safely been assumed.

The Ridge st stunner needs to link up with Disgraced make a hell of a Hannity and Colmbes type team!