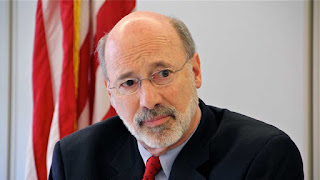 Last year, Governor Tom Wolf decreed that all 67 counties must have voting systems with voter-verifiable paper trails in time for next year's Presidential election. But on July 5, he vetoed a bill that would help them pay for it because it also eliminated straight-party voting. Now he's attempting an end run. With no legislative authority, he's attempting to borrow $90 million through the Pennsylvania Economic Development Financing Authority (PEDFA). Good luck with that!

Whether the PEDFA has authority to float bonds for voting machines is highly questionable. Wolf himself suggested that a legislative solution is preferable. "It's a proposal that we can move forward with, I think, and if there's something that the Legislature wants to do that they think is better, again I'm all ears," he told Pittsburgh Action News in an unrelated news conference.

He added that "it's important to show good faith and that's what I'm doing here."

If he were really interested in showing good faith, he would have signed the bill instead of attempting what may be an illegal end run around the state legislature.

In addition to eliminating the straight-party vote, the legislation Wolf vetoed also extended the time for absentee ballots to be received and still counted by local elections offices. Every year, thousands of absentee ballots are rejected because they are not received by the Friday prior to an election.

“Our counties appreciate the governor finding a way forward that recognizes both the county need for funding assistance as well as the broad funding support we had in the General Assembly,” said Kathi Cozzone, president of the County Commissioner Association of Pennsylvania. “

Good for Gov. Wolf. The money for the machines should be decoupled from this republican voter suppression garbage. They are not doing this for any reason other than what republican party leaders have explained and that is to help down ballot republicans form the Trump effect.

Voters have not asked for this "help' or "reform", it is a BS move.

Democrats love to suppress absentee voting, as it keeps working, traveling, and military folks from voting against them. This is an old tactic.

This voting machine funding/voting procedural changes bill must have been a potentially good law since it prompted the first two comments on this blog (5:10am & 5:39am) - partisans from both sides are griping about it !

In addition to eliminating the straight-party vote, the legislation Wolf vetoed also extended the time for absentee ballots to be received and still counted by local elections offices.

Good. If we are going to pass a milquetoast improvement like the above, don't even bother. We need early voting and we need it now. Election Day is an antiquated concept for a much simpler and less populated time. We also need same day registration. IF we're going to talk reforms, lets talk reforms. We won't because these things create more voters which is exactly what the Repubs do not want.

So instead of paying cash for the new voting machines, Wolf's "solution" is to borrow money and pay interest on top of it.

Wolf is a true democrat.

And let's not forget the bond counsel and issuance fees that he'll funnel to political contributors.

Wolf is a partisan hack.

I agree Wolf is a partisan hack who disguises himself as a regular guy. But the leguslation he vetoed would have borrowed the money, too. So under your reasoning, the Rs in Harrisburg are true Democrats, too.

This is why I wish people would quit slamming one side or the other and start concentrating on the people in the offices more than their party.

9:09 YES! Real voting reform means early voting, as many states already allow, and it should be a holiday at the national level. Voting is a civic duty and should be as accessible as possible.

I support early voting, open primaries and actually think PennDOT should automatically register drivers. But I will not oppose an incremental reform like the elimination of straight party tickets simply bc it fails to include all possible reforms. The expansion of absentee voting allows for people’s votes to be counted, and Wolf callously rejected it with no justification.