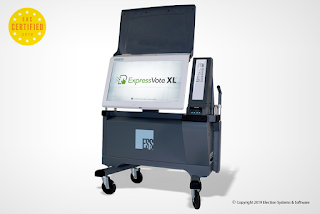 When you vote in November, you'll notice a new machine that looks a lot like the one you've been using in NorCo. Believe me, it's a vast improvement over the typical touch screen voting machine. One reason for this is the voter-verifiable paper ballot going directly into a sealed ballot box attached to the right side of the machine. But what I like best about it is that it is so user-friendly, both for the poll worker and voter. You'll be able to see this for yourself because the county intends to demonstrate the system at numerous locations before election day. When the county has some dates and places, I will post them.

This machine is called the ExpressVote XL. The XL just means it's big, with a 32" inch ... screen.  Size matters, you know. A group of election judges, including myself, and county workers were trained on them yesterday in the cavernous Gracedale warehouse. .

The write-in option, which usually stymies most voters, is a snap, as easy as typing your name.

Although it's highly unlikely you'll have any trouble reading a 32" screen, there are built-in features for those who do. Not everyone is perfect like me. You can enlarge the text size, which will take you through each race individually. You can then switch back if you want. If you are suffering from macular degeneration, you might have trouble reading a colored screen. You can change the contrast to black-and-white. And for the first time, I've seen a machine that really goes out of its way to accommodate people who are completely blind or may even be paralyzed from the neck down. Each voting precinct will have a large rectangular box enabling a physically challenged voter to make his or her choices. I was concerned this could slow things down but was told it's amazingly fast.

In most touchscreens, a machine operator will activate the machine. The ExpressVote XL is already active. It becomes operational when you insert the ballot - a blank piece of thermal paper - handed to you by a poll worker.

Can the ballot get stuck or refuse to load? I tried everything yesterday. I crumbled it up and tossed it to a fellow student. He stomped on it. We handed it back to our teacher, sure it would fail. He smiled and ripped it. The ballot still loaded. A vote could still be cast.

No ballot has been so messed up that it's been rejected, but that's for elections in Jersey and Delaware. We Pennsylvanians are a lot sloppier.

Once the voter makes his choices, his printed ballot will pop up under a glass screen on the right side of the machine. If satisfied, the voter can cast the ballot, which then goes into the sealed ballot box. If not satisfied, he can quit and the ballot will be ejected and handed to a poll worker as a "spoiled ballot."

You get three tries. Then, like in baseball, you're out. But unlike baseball, you still have the right to cast a provisional ballot.

At the end of the night, when the polls close, the votes will be transferred to an encrypted flash drive. They will also still be on the machine. And the sealed ballot box will be opened and scanned during the canvass process. Any number of scanners have been used, and the paper ballots always match the totals on he flash drive and machine.

Wasn't this machine panned by the better election groups? Didn't the county pass up real paper ballots for this machine? Word is that was a bad move.

Will it prevent you from posting something nobody acres about? STFU

Will the Russians make me vote for Trump again on this machine?

Should have switched to mail-in ballots like Washington has. It would have been cheaper than these sure-to-be-insecure machines.

"Wasn't this machine panned by the better election groups? Didn't the county pass up real paper ballots for this machine? Word is that was a bad move."

These so-called "better election" groups spoke numerous times against the XL, and smugly stated several times that they knew better than the Lamont McClure administration, elections officials, a vast majority of election judges who rated the systems after reviewing all of them, the Elections Comm'n (3-2) and NorCo Council. The system they espoused has been fraught with problems in MontCo, and I have written about them.

They also kept demanding delays. They wanted Council to look at Lehigh County's system, but the elections comm'rs who advocated this were not in Lehigh County when that system was demonstrated. Election judge were. Good system. We preferred a better one and were smugly told our heads are too small to understand why we are wrong and should listen to the "better" people.

There were also a large number of personal attacks at Charles Dertinger, who has had the misfortune of being in the center of the selection of three different systems. It's safe to say he knows the different systems far better than his "betters."

Amy Cozze, who did most of the legwork for these systems, gave an excellent presentation on at least two occasions and was unfairly slammed with personal attacks here and elsewhere by Matt Munsey's crew.

Deb Hunter, unfortunately allowed her personal animosity for Dertinger to get in the way of thinking clearly. That became very apparent.

In any event, this system was thoroughly vetted and is NorCo's choice.Having been trained on it, I can assure you that it is superior in every way to everything else. It is the best of both worlds. It gives you the ease of a touch screen combined with a voter-verified paper ballot.

People are going to love it.

Size does matter, therefore informed Patriots prefer 40 Cal over 9mm and why wear flats when a 4 inch spike makes heads turn. This adage doesn't apply to bloggers, although morbid obesity will shorten the reign of terror through natural selection.

You are unfair. Ms. Hunter and Ms. Zirinski are stars of the Democratic progressive wing. They are leaders. They fought for free and fair elections and paper ballots. Non-hackable paper ballots are the future. You are trying to mansplain this issue because powerful women do not agree with you.

Bernie, what does a large rectangular box mean? I loved the way the "old" machines would lower so that I could reach the ballot.

Helene, every precinct will be provided with a rectangular box that can be held in your hands while connected to the touchscreen. It enables persons with disabilities to vote without assistance. I was told that a woman who is paralyzed from the neck down was actually able to use a stylus to make her selections.

This machine can do everything the last one did and is even more user friendly. Come to one of the demos , try it out and let us know. The added advantage of this system, of course, is a paper ballot that you can verify before finally casting your ballot. I am very pleased with it and think you’ll find it is better.

11:48, I get the humor, lol. Zrinski did end up voting for the new system. As for Deb Hunter, she is a brilliant person who even convinced Lamont McClure that the Elections Comm’n has much more authority than he and others thought. Her mistake is that she got too personal in her criticism. She also was MIA on the day all systems were demonstrated in Lehigh.

Meezzacuckoo, I may be morbidly obese but can always lose weight. You are a morbidly ugly person, and prove it every time you comment.

Blueberry balls is an incurable condition, your best option is a surgical castration and conversion to a non binary gender role. Also after the Ridge st stunners magnum opus to Bethlehem city council there was thunderous applause,jus sayin...

anon 7:09. then why don't you run, since you are the gold standard, That would take effort and research and it is easier to sit on the sideline sand throw rocks.