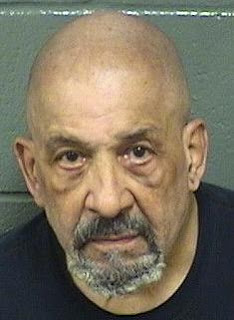 Palmer Tp Police Dep’t:  On 13 July 2019 (Saturday) around 1:00am Edgar Telesphar Himel (age 80) was taken into custody by the Sterling Police Department in Colorado.  Palmer Police Investigators on 7-12-2019 received investigative information Edgar Himel had stayed at hotels off the Rte. 80 corridor in Nebraska and was travelling westbound.  Law enforcement agencies were notified in Nebraska and Wyoming which included the State Police, Highway Patrol, Sheriff Departments, and local police departments along Rte. 80 for Edgar Himel being wanted for Homicide.   Information was later received by Palmer Police Investigators Edgar Himel was staying at a hotel in Sterling, Colorado off or Rte. 76 on 7-12-2019.  Sterling Police Department, Colorado was contacted and confirmed the vehicle Edgar Himel fled from Palmer Township on 7-4-2019 was parked at the hotel.  Vehicle was the 2019 Nissan Rogue owned by victim Penny S. Vantassel-Himel.  Edgar Himel was taken into custody without incident at the hotel.

Edgar Himel will be held in Sterling Colorado as a Fugitive from Justice, pending extradition to Pennsylvania, on the charge of Criminal Homicide.
During the investigation Palmer Police Investigators were assisted by the Northampton County Coroner’s Office and First Assistant Terry Houck, Northampton County District Attorney’s Office
Posted by Bernie O'Hare at 7/13/2019 03:22:00 PM

I sure hope Larry "Barney Fife" Palmer doesn't go out there to bring him back.

I am critical of Chief Palmer but you are unnecessarily mean-spirited. This is a positive development and you act like an asshole. Anonymously, of course.

I am deleting comments taking liberties with the facts.

8:25, it is. Things started off on the wrong foot, but as I said, Palmer Tp has one of the best Detectives around. A real class act, too.

I'm in law enforcement one county over. Still waiting for the BOLO to go out

Well Mr. O'Hare is deleting anything that get into substantive issues. He is sticking to the script given him by JM and Palmer. Anyone who deviates is gone. Fortunately, the national news has got this major goof-up on their radar and are not in anyone's pocket. They also are looking into all the 911 actions.

I am deleting comments that include misinformation as well as the snide remarks about Chief Palmer. I have criticized him myself and allowed some ugly remarks. It is now getting repetitive and the comments obviously come from someone with a personal agenda.

Larry Palmers record speaks for itself.

It’s interesting to note that virtually no one believes that there will ever he an honest accounting of this debacle.

To state the obvious; a department may indeed have gifted detectives and a subpar chief executive.

You don’t get to make the outrageous suggestion that facts will be altered without identifying yourself.

The “facts” are the press conference was pathetic
and left any moderately informed observer without expectations of a rational, honest accounting of the unfortunate episode.
The official investigation will now be strategically prolonged to the point of maximized non-transparency.
It’s a well test technique.
It’s bullshit.

The wagons are being circled and asses are being covered. Careers must be protected and the impact of litigation must be minimized.
A story must be crafted.
Of course protocol is not clear and there is a lot of room for interpretation. So it’s just an unfortunate
Incident.
Let’s move on, and hey, vacations.
A farce indeed.

Mistakes were made.
These things happen.
Move on.

It’s clear that the District Attorney is an advocate for the Palmer Township P.D.
Who is advocating for the victim?

IN the end Chief Palmer will say "its a personnel matter and it will be handled internally".
Hopefully the lawyers will drag out the facts.

Palmer is GW Bush to the District Attorneys Dick Chaney.

Put the light in the sky! Not for Batman but for John Karoly....he will get into the cesspool of Palmer and the DA office on the handling of this and care about the victim. The spin on this is sad as people are not stupid and can see right thru this.

John Karoly has lost his license to practice law.
Mr. Karoly is employed by the law office of Robert E. Goldman LLC.

Apparently there was a time when Bob Goldman gave his word it stood for something.
Apparently those days are behind us.
I’d look for an attorney with higher ethical standards.
Everyone wants to be able to trust their lawyer.

Wow! Something o hare and karoly have in common. They’re both losers that are shiesters that lost their license to practice. Karoly probably gets laid. Ohare on the other hand... well

I think John Karoly would be quite upset at being compared to me.