Brown Will Start Next Year With An Empty Tank 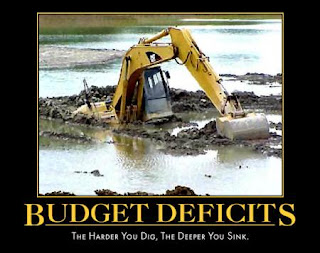 The Express Times' Tom Shortell has already said it, but let me say it again. Based on the third quarter financial report, NorCo Fiscal Director Jim Hunter is projecting that the County will end the year with just a $21 million fund balance. Since John Brown is projecting to use $20 million of that fund to balance the 2015 Budget, that means the County will start off the new year with a reserve of just $1 million.

In June, the County's independent auditor criticized the County for spending $14 million more than it took in during 2013. She recommended that there should be at least six months of expenses in the till at all times, which is approximately $60 million. Other accounting firms are a little more lenient, suggesting that one or two months are sufficient. Even others suggest 10% of the total budget. By any accounting standard, this is insane.,

I have yet to hear any accountant recommend starting off a new year with just $1 million in a County that spends $10 million per month.

After the meeting was over, Shortell walked up to Brown with a question. Most of you don't know Shortell, but he's nothing like me. For one thing, he's nice. Brown answered the question, and then just walked off when a follow up question was posed. It was though he might get dirty by lowering himself to speak to an inferior.

Actually County Council has no GSAB policy. Why do you make an ass of yourself trying to destroy ths county executive.

Northampton County has had a GASB 54 policy since 2010. You don't know what you're talking about, as usual.

John Brown has already has hired plenty of help with your tax dollars in an attempt to stop him from destroying himself. Does not seem to have worked so far. Sorry that @ 12:58 does not like the truth but it is what it is! JB can't control the press or he would be spinning the truth in the same manner as his BS newsletter he sends his most valuable asset every two weeks.

If you have a 330 million dollar budget and there are 12 months in a year you are spending approximately 27 million a month. He will have no emergency money. This is no way to run the County.

WFMZ just reported that South Whitehall is upping its taxes because it needs to provide services but have a reasonable amount of money on hand for emergencies. Seems like the days of kicking the can down the alley are over in some places. Their Board member seemed to be taking one heck of an arrow for their increase.

maybe he's anticipating a 20% reduction in workforce. if 20% of the current employees leave because of there compensation package reduction, and brow doesn't replace them, wonder how much that would save.

Bernie, how will this affect the county's bond rating? Can't be good. If Sponge John Brown stain ends up with an emergency next year and has to borrow money the debt service could be through the roof.

7:23 AM can't come close to saying something on topic. The topic is, we are headed towards bankruptcy at 60mph, and Brown's plan does nothing except change the speed to 59mph.

Can you see that, or are you mired in pig shit and drunk on swill this morning?

The funniest part about last night is that they had to send Doran up there to explain the budget because the guys that Brown hired do not know what is going on yet. So the guy they are trying to get rid of has to come up and explain to counsel what's really going on, while the guy they want to replace him with (with the expensive secretary has been filled for five years) fumbles up everything and really looks unsure of himself and what he is saying that the mike.

As for Doran being there i understand that Peg Ferraro told Brown that from now on, he better have department heads and people like Doran at meetings, instead of inexperienced cabinet members like Luis Campos, whose stock answer is ether misinformation or "I don't know."

"Bernie, how will this affect the county's bond rating? Can't be good."

This will kill us. The audit should be a disaster, too.

8:26, Though your comment might be relevant to a Fiscal Director, I really must insist that you ID yourself before posting information that seems to be driven by hatred of a person, as opposed to any desire for good government.

"maybe he's anticipating a 20% reduction in workforce. if 20% of the current employees leave because of there compensation package reduction, and brow doesn't replace them, wonder how much that would save."

This is a game of chicken. Whoever blinks first will be the one who raises taxes to prevent this financial fiasco. Brown wants someone other than himself to be the bad guy who raises taxes.

Wonder if the budget includes monies for defending lawsuits [emails, NLRB violations]. There are contracts to actually be negotiated no matter what Brown proclaims.

Not anywhere near $20 mil. We make squat. Cutting employees, our medical coverage not giving raises none of it will help. We don't cost the county $. Our salaries are not that much. This is about Brown wanting to screw us and blame us for the problems. We are scapegoats. We are not the problem. He does not have to screw us he is choosing to screw us. I hope that people understand this. After he is dine with us he will screw the tax payer. Get ready. Its coming.

Brown and his crew need DP/ID services. They are intellectually disabled.

LOL I bet he could use the services offered at other offices as well.

This is just bad government..period. Irresponsible and a threat to essential services to the residents. When are our State representatives going to step up and tell the county to obey the laws of the Commonwealth.JB not above PA laws. Gutless not to take him on now before he does serious damage to this county and the future of our children.