NorCo to Buy 112 Acres in East Allen For Open Space 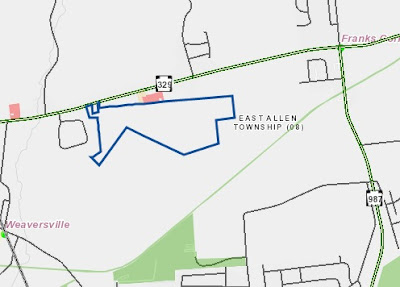 As we all know, warehouse proliferation and increased truck traffic are two of the Lehigh Valley's biggest problems. While they provide some jobs, they also destroy local roads, gobble up the time and resources of first responders and detract from our quality of life. There's little a county government can do to slow things down as it has no say in zoning matters. But one thing it can do is buy up land that would otherwise fall prey to land developers. That's precisely what Northampton County did last week. It agreed to purchase 112 acres along the south side of Route 329 in East Allen Tp for $2.69 million, or $24,000 an acre.

"Some of the views are phenomenal,." noted Parks Director Bryan Cope.

One of my objections to some open space projects is that it is money wasted buying swamps and cliffs. While these tracts are certainly environmentally sensitive, there is little danger that anyone is planning to build a warehouse on a swamp.

But this is land that could be developed for warehouses or a residential development. So preserving this land, which is located close to the Nor-Bath Trail and Wayne Grube Park, is an excellent use of county resources.

Some of this land has been farmed for generations, and that will continue.

Cope noted that, within the past two years, the county has been able to add two parks to its roster with just over 184 acres. Another 217 acres have been protected, both in rural areas and in more urban environments like Bethlehem and Easton.

Executives Lamont McClure, John Stoffa and Gerald E "Jerry" Seyfried all made open space a cornerstone of their administrations. John Stoffa actually ran on the very unpolitical promise to raise taxes to fund it. "They elected me anyway," he liked to quip.

McClure hailed Seyfried as the man who created "all the things we do today" with respect to  open space.

"Oh great, they want to name a swamp after me,"is how Seyfried responded when Council member Ron Heckman informed him.

Stoffa was an easy win since the blueblood Republicans backed him over Bob Nyce after their pick Peg Ferraro was beat in their primary. Stoff was a clown and ran the county like a Republican so they didn't even bother to run against him for re-election. He almost delivered on the republican dream of dumping Gracedale. The guy was a fraud and a disgrace. By there way there is no dedicated open space property tax. Nice slogan but not true.

By all means, stay LOCAL with your Blog topics. Trying to prop-up our Federal government’s actions will never work at this point. We’re screwed there.

Of all of NorCo's county execs, John Stoffa was the least political, the most fiscally conservative and the most socially liberal. He supported the sale of Gracedale at a time when the county was receiving no TGT bc it was bleeding money. I supported him in this effort but now agree we should have listened to Heckman, Seyfried and Grucela when they urged Council to keep the home.

Is this property truly threatened by warehouse development? I see very little access to 329 on this map.

Heckman? is he still alive? I thought he passed years ago

Grateful for the purchase and goal to keep our farmland and open space and stop all warehouses. Build in the already empty industrial parks close to highways!!! First time I see the executive doing something productive for the future

Don't worry, Jaindl owns all the land to the south of this, so we'll still get some big ass warehouses or maybe 1,000 55+ houses.

Longtime township farmer families are the ones selling their communities out to warehouse developers. Just look at Moore and the soon to be leveled golf course. I guess getting greedy farm families to accept a lower offer from neighbors (via open space cash) is better than them cashing out to developers and not caring what mess they created. If they're being forced to sell because they can't pay the taxes, the municipality deserves every bad thing that happens because of it. If they're just being greedy and putting neighbors over a barrel, they're within their rights and complete heartless assholes.

why are they greedy assholes? it's their land, they own it. who are you to say what they should do with it, seems you are the greedy asshole

Wouldn't want to think you're greedy.

I know. We as a community need to work together in East Allen township to stop this insanity. I'm surrounded by his farmland all of which they are selling

An option buy the land and let farmers farm it!!!

Under the Northampton County Parks 2000 plan, the County bought the development rights and the farmers still own the land. They can't sell it for development and it must remain a farm. They called it the "farm preservation program" and it was a tremendous success and still is today.

Just to be clear, you are saying the “recommendation” they wanted to vote on was not the type of recommendation included in the definition of “official action” in Sec. 703 of the PA Sunshine Act and their ability to vote on it was not covered by the June 30, 2021 amendments to the Act?

1:00 Walk a mile in their shoes. Or you can just continue to burn calories jumping to jealous conclusions. Those families have done more work in the day by the time you roll out of bed. All the while trying to make a living off the land and at the same time making business decisions based on their suburban neighbors. I don't blame them one bit. Then again, I was raised on a farm and have seen these realities first hand. Unlike the view you have from your front porch.
If my speculation about your work ethic is off base, I'd ask how it feels to be judged? I'm going to bet if you faced the same constraints, you would be another greedy farm family.

Farmer families are some of the hardest workers in America! I’ve never been a farmer, but know the quality of ‘hard-working’ is becoming pretty rare these days. Maintaining many acres as a farm is, for most farm families, their own Personal Retirement Account. In time, that land equity is what can save a farm family’s well deserved retirement.

"I'm going to bet if you faced the same constraints, you would be another greedy farm family."

Hearty congratulations and thanks for the shit stain you're leaving. I'd have bankrupted you years ago, instead of buying your food, if I knew this is what you'd do to your community. F you. Seriously. And the plow you rode in on. You're as bad as the developers - or worse.

Nah, with logic like that, you will bankrupt yourself. If you are pure as the driven snow, go buy a farm in an area with development pressure. I'm sure you could buy with purely on principal.

@2:31m May you not have food or anything that ever comes from a farm. Based on you shit stain of an attitude you do not deserve anything a farmer may give you.

2:31 - It also appears you have less than an elementary understanding of our food production system. I'm sure your righteous boycott won't bankrupt anyone. Start knocking on doors of the local farms and ask to buy some food. Therein lies the problem. The idea in your head, of how farming works is far, far from reality. Maybe you should mind you own business. You don't own that ground and have no skin in the game. You have no right to think you can dictate its use.