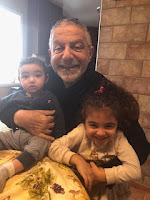 Previously, he served as Easton's Controller.

He arrived in this country from Lebanon with pennies in his pocket and became a successful businessman.  He his wife, owned and operated The Carmelcorn Shop, an institution in Downtown Easton, since 1996.

In addition to his wife, he is survived by three children and two grandchildren.

This is heartbreaking news. Tony was a wonderfully kind, extraordinarily talented, grateful and generous man. May he rest in peace and may Sia and their family be comforted.

Whatever happened to the hydro electric renewable energy project at the chain dam in Williams Township, Lehigh Canal that the County was funding?

Having the privilege of working with many Northampton County officials, I must say Tony was top notch. May you rest in peace my friend.
Rich Kessler