Pittsburgh to D.C. On a Unicycle? 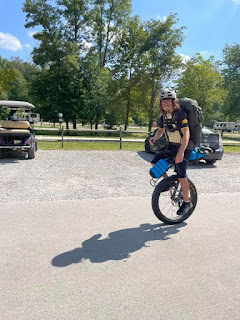 In August, I bragged quite a bit about a 335-mile bike trip from Pittsburgh to D,C. along the Great Allegheny Passage and C&O towpath. It was actually a blast, even though my bike was stolen an hour after I finished. I'm far from alone.A Lehigh Valley friend is making this trip for the second time as I write this story. I hope she stays dry today. As much as I like to toot my own horn, some people simply amaze me. I told you about one person who rode the entire distance in 24 hours. I've also mentioned a woman who is cycling 3,000 miles (not 335) across the country. And now I want to tell you about Alessandro Pagliai from Lancaster.  He is doing the Pittsburgh to D.C. pilgrimage on, of all things, a unicycle.

One man, One wheel. One gear.

His ride is a Fat Tire Nimbus Hatchet Unicycle and he's doing 40-50 miles a day.

You may have noticed he has bags and a rucksack. That's because he's camping!

Tell him to keep an eye on his unicycle once he gets to D.C.

The is 1- upmanship for you Bernie. Literally 1 wheel!

Of course it is. Did you expect a serious unicyclist to buy a $60 Huffy at the local Wal-Mart for a trip like this?