That Billboard Must Have Really Bothered Callahan 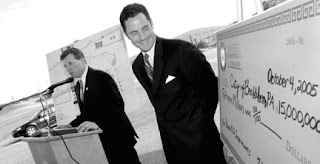 If you're a candidate for elected office, and wants to slam your opponent, it always pays to be polite. As the stakes get higher, so do the need for good manners. You can still do all the dirty campaigning you want through your evil campaign managers, but you should be above the fray.
This is certainly true in a Congressional race. If you want to claim that your opponent is a lying sack of shit, you should use a word like "disingenuous." That means exactly the same thing, but it's oh so genteel.

When you start throwing grenades like "liar" around, and do it yourself instead of through a campaign manager, you're going to piss people off. That's one reason why Ron Angle is nearly as unpopular as he is popular. When he calls other elected officials "liars, crooks and phonies," they and their supporters tend to get offended. So do many neutral observers.

Ron gets away with it, barely, because he mocks himself as much as anyone else.

Bethlehem Mayor John Callahan is no Angle. He's pretty much incapable of self-examination, as demonstrated by his complete inability to accept any responsibility for Bethlehem's fiscal demise. He's failed to see the irony in touting job creation when he has imposed a hiring freeze and threatened layoffs at the City that is under his control. And now, in a fundraising email blast that went our yesterday, he's calling LV Congressman Charlie Dent a liar. "[H]e bought billboards lying about my record as Mayor," he petulantly whines. He is referring to one billboard Dent purchased along Rte 378 during Musikfest, which incidentally is accurate.

I suspect this personal attack reflects his growing desperation as it slowly sinks in that Hizzoner has picked the wrong time to run for Congress. What troubles me is that Callahan is slinging mud while Dent is serving this nation's interests overseas.

Well Bernie if he doesn't become your Congressman, he will sure as hell become your County Executive. He or Barron, take your pick.

what is truly ironic, is that you fail to see there is no irony here.

the Dent campaign's been slingin mud since day 1. nuthin wrong with that, but stop making it sound like they're above it.

I think we should be asking Dent where are tax break is. He was a state senator when gaming was legalized and we were promised school property tax relief...I am still waiting.

I think Bob Donchez said it best during his last campaign for council...the casino host money should be used to freeze city taxes and to pay down the city's debt. (Last year the city paid off over 10 million in debt and taxes were no increased)

As I recall, Dent was voted against gambling when he was in State Senate. I asked him at the time, and one (of several) of his reasons for the "no" vote was becasue he believed that the tax cuts would never come and that the gambling money would be diverted elsewhere. He was right

You cannot hold a person responsible for something he opposed.

So now you people WANT more government jobs? Completely absurd. You can promote job creation without swelling city hall. This is like talking to a first grader.

not really. a first grader doesn't have an agenda.

"So now you people WANT more government jobs? Completely absurd. You can promote job creation without swelling city hall. This is like talking to a first grader"

I expect a candidate to be internally consistent. Callahan is not. He simultaneously freezes jobs at City Hall, threaten layoffs and claims people should elect him bc he'll create jobs.

He can't even do that at City Hall, as any first grader can see.

"the Dent campaign's been slingin mud since day 1."

It has been a negative campaign, but Dent himself does not engage in childish name-calling. I thought Callahan was a little better than that. I guess things must be getting tough for him.

"He was a state senator when gaming was legalized and we were promised school property tax relief...I am still waiting"

He was, and as NotSoCasual observes, was opposed to gambling. And one of the reasons is exactly what she said - he never though taxpayers would see a nickel of tax relied. They have not, either.

The guys who were promoting this were people like Callahan.

JC is going to lose his cool more than once during this campaign, and it will hurt him. I cannot wait!

You make no sense.

You expect Representative Dent to promote job creation in government too? I thought you Repubs were against swelling government?

Listen, it you run around and promise you'll create jobs, you look like a big phony if you implement a hiring freeze and threaten layoffs where you do actually have some control. Whether these are private or public sector is immaterial - the simple truth is that Callahan does not practice what he preaches.

Dent called Callahan a "coward" in march. Still think he's not being childish and refusing to throw mud?

This seems to be an unfair criticism of Callahan. Callahan has a plan to creeate provate sector jobs as the next Congressman.

As Mayor Callahan is tasked with balancing the needs of the city with realities of the economy. A hiring freeze is needed.

It is an apples to oranges comparison.

Not if you're the orange.

"Dent called Callahan a "coward" in march. Still think he's not being childish and refusing to throw mud?"

Truth is a defense. He is a coward who refuses to take positions on anything controversial, leading from behind. The way he approached the health care issue is a disgrace that should embarrass any real health care reform advocate. Callahan paraded around with the cooks from Moveon ouitside of Dent's office like he was a LEPOCO member, but refudes to say where he stood.

Dent should not have used that word, but I can think of no other word that better describes Callahan's antics.

Tax cuts aren't the issue! When you vote Callahan, you would never expect lower taxes. He has his supporters, and they will vote Callahan even if promises higher taxes. So why keep bringing it up?

Let's stop all of the bickering. Dent will defeat Callahan, handily, and as a reward for running against Dent, Callahan will be offered a job in Washington, by Vice President Biden. Then we will have the best of both worlds, Dent as our congressman, and Callahan out of the city.

Do you think Biden could also find a job for his buddy Steve Barron. Great post.

Bern, give us a break.

this is ridiculous. your rationalizations and internally inconsistent standards are destroying your credibility

You know, I've been getting comments since 2006 telling me that if I'm not careful, I'm going to destroy my credibility.

One of these days, I'm going to listen.