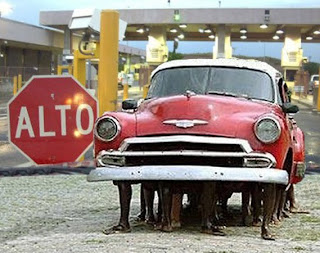 He was playing to a large and friendly crowd.

I arrived at Friday night's monthly LV Tea Party meeting just in time to hear Northampton County DA and Fear Monger John Morganelli warn a 300-plus crowd that a "tidal wave" of illegal aliens is coming our way. He was singing that song four years ago, so it must be an awfully slow tsunami.
According to a Pew Hispanic Center study, the number of illegals has actually dropped in this country by nearly a million. No jobs. They're illegals, not stupid.

But to hell with facts. Morganelli made points with tea drinkers by slamming both Bush and Obama for lacking the "political will" to do anything about this problem. Morganelli incited the crowd with accusations of "a number of sexual assaults by illegal aliens. They should not be here. ... No one wants to do what has to be done."

What's that? The final solution?

The DA claims they're everywhere, kinda' like bed bugs. "Go to any job site and you'll see people who are not home grown Americans."

Blame the Statue of Liberty! The damn French gave us that.

I wonder what "home grown Americans" look like. Didn't we kill most of them? Well, I'm not too worried. My grandson has lots of Hispanic friends. Most of them are much worse that illegals - they're Puerto Rican. But they like me and even gave me a nickname - Apestoso Pedo. Sounds impressive, right? Whenever I mention this to Spanish-speaking people, they start laughing right away.

It's probably my accent.

On a roll, Morganelli jumped from illegals to demanding that parole be abolished for rape, murder and other violent crime. He noted Governor Ridge's parole boards required violent offenders to serve 80% of their sentence before considering parole, but Rendell has "filled the parole board with liberal-minded people."

He points to quadruple-murder suspect Michael Ballard as an example of what happens when someone is unleashed too soon. "These guys are getting out of prison sooner and sooner."

John brought the crowd to its feet a few times as he played them like a violin. As he left, I thought how senatorial he sounded.

Well, I guess we know what Morganelli's reelection gimmick will be in 2011. Remember the 2nd amendment stance, then there was the war on Drugs the following election. There you have it illegal immmigration. That is what the polls show. Question for Mr Morganelli, where has he been all this time, they are everywhere and he has remainded silent.

He went tot he tea party! he is damn good politician but that is about all.

We have no idea how many Hispanics are in the country and how can anyone believe this particular Pew Trust poll? Did Pew present their findings to an independent review board for substantiation?

"These guys are getting out of prison sooner and sooner"


yeah, and the same people that will scream about this will scream about:
-unrealistic narcotics laws, and
-having their taxes raised to build new prisons (800 million by the state, last i checked)

How do you find out where the local Tea Party meets?

Just check their web page, www.lvtp.org. They meet one Friday per month at Palmer Tp's community bldg. I decided to drop in on them again.

"Did Pew present their findings to an independent review board for substantiation?"

Pew itself is an independent group.

I don't know if Mr.Morganelli is right. I have some grunt work to do. Nothing specialized just some dirt and wood moving. So called "contractors" and "handymen" want over $100. Hell, if I was still young I'd do it but it sure as Hell isn't worth $100.

I drive by Home Depot but I never see any Mex's hanging out.

So where the Hell are all these illegals, I need to hire one.

How does this guy continue to get elected when the rest of the state has him rightly figured as a small-time loser?

Bernie, are there rumors of any challengers?

I know of no one at this point.

They are TOP SECRET so for goodness sake DON'T CLICK HERE!

Maybe I am missing something and I suppose I will get slammed for asking: Is there something wrong with the top official elected to uphold the law in the county complaining about illegal aliens and the federal government's failure to enforce immigration laws?

I am not opposed to Hispanics or any other ethnic group coming to our shores or across our borders. But it does seem odd that many from other countries refuse to do so legally and it amazes me that there are people in favor of people coming into the country illegally. To me, that is an indefensible position.

The Statue of Liberty doesn't suggest directly or implicitly that people break the law to enter the US. It symbolizes America's historical generosity - and means that we are all the richer - for becoming a melting pot for immigrants. But these were understood to be people who entered the country according to certain rules.

My Grandparents emigrated to the US from Europe, learned English and passed the tests necessary to become American citizens. They were proud of their citizenship and their adopted country and, remarkably, remained so even though they lost their eldest, and only son, in World War II at the age of 18.

Why is it considered a positive that people come into the US illegally?

I agree with 8:53 pm....if we Americans break the law in our country or another country we are held responsible and yet we should turn the cheek for non-citizens who enter our country illegally..something isn't right. If you want to come to this country do it legally...it isn't fair to those who do come and follow the rules. I don't get the attitude that some think the rules don't apply to them or only apply to a certain group. We should be protecting our borders and allowing communities to enforce the Immigration Law and those that employee Illegals are actually enabling them to be here illegally and should be held accountable. The melting pot is for those who follow the rules of our land.

"So where the Hell are all these illegals, I need to hire one."

Stop by your local Wawa between 5 and 530 am and you can take your pick.