Where's Charlie? Is He the Invisible Man? 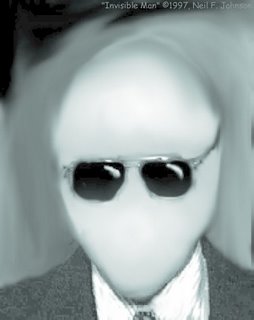 Like Johnny Appleseed, our Guv is popping up all over the state. But instead of apple seeds, Rendell is scattering checks - a half million for a Bethlehem bistro and nearly 2 million to redevelop the old Pomeroy's in downtown Easton. His official campaign doesn't formally kick off until today, and he's got a 22 point lead in the polls. But he's been out there for weeks, running hard, as though he were the underdog. He'll win and he deserves it.

Now compare this to Charles Dertinger's Congressional campaign. He mounted a last minute write-in campaign to get the Democratic nomination for a Fall face off against Republican incumbent Charles Dent, who incidentally has a $700,000 warchest.

As results trickled in and it became apparent that Dertinger had the necessary write-in votes, a hungry candidate with a message would sound his trumpet. Why is he running? Is it the war? Concern over rising health care costs? Our shrinking middle class? Exactly what is his message? He does have a webpage, but it tells us nothing except how to give him money.

A candidate who snubs the press will ignore his constituents. This explains why it took Dertinger three tries to get elected to Northampton County Council. It also explains why Dent will win in the Fall. Dertinger is a Democratic Lynn Swann, hand-picked by party leaders, whose real message is personal advancement.

Your hostility concerning this candidate is astonishing. You spin every event in the most negative way possible. Why don't you cut this guy some slack? You seem to want him out of the race even more than Charlie Dent does. Are you a Republican?

I don't believe a bad candidate should be supported just because he happens to be a Democrat. Frankly, I was happy to see Dertinger elected to county council. I thought he would be a nice counterbalance to Ron Angle. But in his few short months on Council, he's been a disaster, a view shared by the Morning Call editorial board. Most importantly, he is part of a group that made the decision, behind closed doors, to appoint two council members to fill vacancies. His unavailability to the press, both before his write-in announcement and on election night, confirms the suspicion that he is one of those who operates best behind closed doors. And I'm not getting into his association with Michael Solomon, who was convicted of bribery, or Dertinger's support for Reibman, the "Democrat" who promised 30,000 jobs and then laid off over 100 county employees. Nice guy, huh?

Right now there is a lot of voter anger at Harrisburg incumbents who operate precisely on the same principles. This guy acts like them and we should support him when he runs for Congress just because he is a D?

And the last thing public officials need is for someone to cut them some slack. That's what the Rs did for Lynn Swann only to later learn he has no understanding of state iissues and did not vote in many elections.

I understand that the 15th District should have a Democratic candidate. But you don't put up a hack at the last minute if you expect to win. That's not a candidate.

To answer your final question, I was a D most of my life and left for the Green party when it become apparent to me that the Democratic party was drifting too far to the right. I left that party and actually did join the R party briefly when Toomey was running against Specter. I was afraid Toomey would get the nomination and, as it develops, Specter did not win by much in his primary. So I'm glad I did that.

Then I came back to the D party, whose progressive base seemed energized during the last presidential election. That's where I am now.

I am no Dent fan, and think he has been for more reactionary than was originally thought. But if the Dems wanted to beat him, they should have produced a candidate. We have many fine local Democrats who could win. That's something Dertinger couldn't do if he tried, and it's obvious to me that he isn't trying. Isn't that obvious to you, too? And we should cut him some slack?

But thanks for your comments. I appreciate them. By the way, if I were Charlie Dent and knew I was going to have a Democratic opponent, who better than Charles Dertinger?

Thanks for your response. I was Anyonymous above, now FtHillDem. (The system does not seem to like my password, so I am Anonymous again). It is not obvious to me that Charles Dertinger is nearly as bad as you make him out to be. I give no weight to the Morning Call editorial, as that was a real hatchet job. Face it, their editorial page is Republican, and they probably had marching orders to nip Dertinger in the bud. By the way, did you read Dertinger's Op-Ed response? He made some real good points in my opinion. But your data selection seems blind to possible good points of this candidate.

Dertinger's record as a public official is not obviously terrible, and may in fact be good. I don't know. What I do know is that Dent's record IS terrible, and that it would take a pretty poor Democrat to approach that level. (Democrats like that do exist. I point to Leiberman of Connecticut).

I say to cut him some slack as a candidate. He probably never did plan to run, but saw the need to give Dent some opposition. Give him time to get his stuff together, and then make judgement. He probably could not claim a ballot victory on election night, because Dent's Democratic write-in vote is not yet known. I suspect that Dent will not get more than 3000 write-in votes, but it is very clear that Dent really did make an effort to get those votes. It will be interesting to see if the Morning Call reports the write-in vote totals when they become available. My gut feeling is that they will not report a result which shows Dertinger besting Dent.

I think that you did a very good thing by your efforts to keep Toomey out of the Senate. It shows that you understand the concept of the "lesser of two evils". Now just apply that principle to Dertinger vs. Dent, and see what falls out. Just having a Dem to vote for a House Majority Leader is something that could prove crucial for the next two years. But it could be better than that. Let's wait to see what kind of candidate Dertinger really is.

By the way, why didn't the many fine local Democrats you refer to try to run against Dent?

I'll let you in on a poorly guarded secret - I'm an idiot. I have an overabundance of opinions, especially about local politics. Sadly, I'm often mistaken. Now this doesn't stop me because, in addition to being an idiot, I have an overinflated ego. I have ruined many candidates seeking local office by trying to be helpful - and that will be the subject of post in the near future.

Now on to the merits of your most recent comment. You assert The Morning Call is a Republican newspaper. Most Republicans tell me it is a Democratic newspaper. I'll tell you what I think - it's owned by the moderately liberal Tribune, its editorial board is a mixture of both parties, and its opinions tend to be moderate or slightly liberal. Its opinions also tend to be a bit stuffy, although the Dertinger editorial is a glaring exception. The Express Times is a bit more conservative, but I like its "in your face" style of editorializing.

One thing that gets the attention of both of our local papers is the suggestion that a local government is violating the Sunshine or Right to Know Act. Dertinger is part of the cabal that met behind closed doors to replace 2 council members who resigned without any public imput. Then they adopted a laughable Code of Civility that actually curbs a regular citizen's rights to express himself during a meeting. They got off on the wrong foot, and Dertinger was a big part of that. I have to tell you that bothers me a great deal, too. In fact, I filed a lawsuit over the Sunshine Act violation, and it is currently pending.

In preceding years, Dertinger was constantly trying to get elected to County Council, and was constantly being defeated. He engaged in some real nasty campaigning with his buddy, Michael Solomon (convicted of bribery), who worked as his campaign consultant.

During the bond fiasco, which has produced no jobs except for an additional judgeship, he was an ardent supporter of every lame-brained idea that came from the Reibman administration.

John Stoffa, our current county exec, ran against that type of nonsense. He didn't believe in PAC money, something that Dertinger gobbled from nonlocal sources.

I could go on, but I'll let you see for yourself.

Your "lesser evil" makes sense, but one of the candidates must have something positive. I don't see that with Dertinger, Dent, or Greta Browne. I wish we could vote for "none of the above," as is permitted in some European nations.

Why didn't some of our better known Dems run? I don't know. I strongly urged Morganelli to do so a long time ago, but he has kids he would like to see grow up. Lisa Boscola and Bob Freeman porobably feel they are more effective in their current roles, and Cunningham ran for Lehigh County exec to be closer, rather than farther, from his family.

Having just been elected to county council, I think Dertinger should have stayed there. Several of the unsuccessful candidates could have made a splash and put up a good fight.

When Ritter first ran, he came out of nowhere. That was also true of Toomey. Perhaps the Republicans havve a better recruiting effort than Dems. That would not surprise me.

OK, so I've tried to esxplain myself. Yur views are shared by many others. My opinion is most certainly a minority view, especially among Democrats. But it is my honest belief.

Just found your blog and had to say something about this post. While I don't know much about Dertinger's background (I live in Lehigh county), I'm very disappointed in his lack of "being heard or seen," not to mention his lousy web site. I think Dent is a party hack and would have loved to have seen a good alternative to him. But it seems that the Dem's just wanted to put up a name (perhaps it's part of their "50 State" strategy). I'll certainly vote come this November, but I'll probably skip this part of the ballot. Call it apathy.

Well, some might call it apathy, while others might call it honesty. I really wish we did have the choice of "none of the above," which, if successful, would precipitate a new election with new candidates. That's one of the voting reform proposals.

Whule I didn't utilize the "write in" option at the recent primary election, the new digital machines make it very easy. I'll probably try "none of the above" in November. And if that doesn't work, I'm going for Mickey Mouse.