Are You Ready to Rumble? 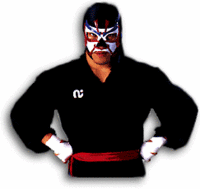 Ever listen to talk radio? Conservative extremists delight in this format because - well - most of them can't read or write. Although only semiliterate myself, I confess a weakness for some of these shows.

The Lehigh Valley has its own increasingly popular talk radio program on WGPA Sunny 1100 AM. The show broadcasts Monday through Thursday between 8 and 10 AM, and is hosted by the always controversial Ron Angle. Yep, he's the County Councilman. Yep, he's the same guy who was tossed off another station for making insensitive remarks that offended every minority in existence as well as some that have yet to be created.

Ron's loud, obnoxious, insensitive, and uses horrible grammar. He's also funny, intelligent, and much more moderate than he pretends. Some call him a populist: others a demagogue. Take your pick. Personally, I like the guy. I can't help it.

Long before newspapers or blogs reported Dertinger's Congressional write-in campaign, Angle was talking about it on his show. He finds out what is going on and tells his listeners. He also brings in a lot of local pols from both sides of the aisle, from Charlie Dent to John Stoffa. It's rather informative, and Angle occasionally surrenders the reigns to me as guest host. I once gave most of his listeners massive heart attacks when I introduced Ramona Africa as a guest. Hospitals were busy that day.

Unfortunately, the show may be coming to an end. Angle and Polka King Jolly Joe Timmer have been feuding for months, and on the air. Jolly Joe just happens to own the station and thinks Ron's too greedy. Ron thinks Joe is too cheap.

On Monday, at 9 AM, there will be an ON AIR showdown. I wish I could tell you this is just shtick, but these guys are really after each other. Retired Bethlehem Police Captain McLaughlin has been reinstated to maintain order, but will only be issued a squirt gun. There are rumors of a cage match.

If the show does end, we will all lose. I can think of no other forum in which we have such easy access to our local leaders.

Not Ready to Rumble Yet? Then get a load of this.

Billy Givens, a Bill White Hall of Famer and civic activist who has spent years wandering the streets of Easton with bullhorn and boltcutters in hand, has turned in his megaphone to invade the blogosphere with billybytes.

This guy's the real deal. He's been tossed out of more public meetings than I've ever attended. He and Ron Angle (see above) are widely believed to be the reasons why a terrified county council has adopted its "Code of Civility." I've watched him turn candlelight vigils into near riots with Iraq war supporters. (I watch from a distance because I run when Billy goes into overdrive.) Here's how he describes himself:

"With relish, Billy Bytes takes chunks out of those who hold themselves up as models of probity but are venal, be they officials such as mayors and school board members, political parties, or the mainstream media. Billy is mesmerized by the political process and serves it up in all its radiant, rubbishy, riotous detail as played out on the stage of Easton, a river town half way between Philadelphia and New York."

"Billy began with a newsletter distributed in downtown Easton, peddled to local merchants, shoppers, and passers-by. Occasionally, he used a megaphone to get his message out. With the launching of billybytes.com, the newsletter, once a toy boat in the bathtub, unfurls heroic sails to the powerful world-wide winds of the Internet. Those mainsails will catch readers' comments and the reflections of guest writers from the four corners of the globe."

Billy is a must-read, if only for the colorful language. But I don't think Billy really bites. He sure does bark, though. Did I mention he's running for governor?

Bernie,
What was your verdict today? I think Timmer became a little flustered at times. A few times I wasn't sure who owned the station!!!

I agree with your assessment. Att'y Bruce Davis, for those of you who did not catch the show, acted as referee. Timmer interrupted, yelled, and was not jolly at all. Davis attempted to extract a pledge from both not to bad mouth each other on the air. But as soon as Jolly Joe went on air at 11 AM, he proceded to trash Angle. He did not stop there, but also dumped on some of Angle's callers by name.

Surprisingly, Angle did not walk off and was not fired. Timmer needs Angle because he is a cash cow for the station. And Ron does really like talk radio, and I think he's a little reluctant to give it up, although he is certainly being pushed in that direction.

Good luck, Joe. Check out the Bethlehem Blog Times if you have a chance.

I really like the show,its one of the few you can call in and be heard.Ron does not cut you off,as does Michael Savage.To be honest I learned a lot about the Valley since I started to listen and I hope he remains on.

Robert, I don't think we have to worry. Timmer has not given Ron any notice. They just fight over $ all the time. But the show is too much of a cash cvow for Timmer to nix it. And Ron loves talk radio. I think he prefers that to anything else he does. Take care, buddy.