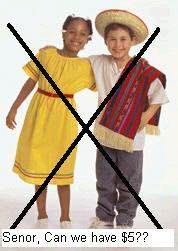 Driving through the heart of Allentown to attend Mayfair, I was impressed by its large and lively Latino population, who seemed to enjoy the warm Saturday evening. Families promenaded along Hamilton Street, and a "gang" of about 5 kids pelted each other with buckets of water.

Well, those kids had more fun than me. Like Team Bush, Mayfair officials seem intent on keeping out the very Latinos I saw in inner city Allentown. Team Bush wants to build a 7 million mile fence around the US, and Mayfair officials surrounded their fair with an ugly chain link fence. They also charged $5 admission. I can't tell you whether they made you speak a few English phrases or produce citizenship papers because I hopped the fence as well as Jim Gregory, not too shabby for an old fart. I'm used to evading metal detectors at Easton's courthouse, so this was a snap!

I walked from one end of the fair to the other, saw about 7 or 8 Latinos, and they were the ones picking up garbage. Way to go, Allentown! In the spirit of diversity, "English only" Allentown was serving tacos served by cute blue-eyed blondes and did have a Caribbean stand with fake palm trees. Now you're going to say, "Wait a tic! There was a Latino radio station on Friday night!" To this, I respond, "Yeah, and some of my best friends are black."

The National Guard was one of Mayfair's heralded "artisans," with a rock-climbing wall for the kiddies. I think they were setting up a machine gun firing range as I left. For some reason, no stands were set aside for the artisans from LEPOCO, our local peace group. They probably couldn't afford the entrance fee.

In its heavy coverage of this event, the normally progressive Morning Call failed even to hint this festival might discriminate against Allentown's large low-income population, much of which is Hispanic. Well, its reporters may not have noticed. But as The Morning Call itself acknowledged in an editorial promotion, it's also a corporate sponsor, which explains its heavy positive spin. And let's face it, Allentown's Hispanic population reads some Spanish paper anyway.

What really kills me is that, not only did The Morning Call sponsor an event that was fenced to keep out the peasants, but the state also kicked in $50,000, thanks to two state reps. anxious to keep their jobs.

If Mayfair officials want to make money next year, I have a suggestion. Charge people who want to leave; they'll pay anything.

Mateo Braccili, who owns the Lehigh Valley's only Hispanic radio station, WHOL 1600 AM, was kind enough to assure me that, at least on Friday night, Mayfair had a large Hispanic contingent.

"As the owner of the largest and only full-time Spanish media, WHOL "Hola 1600am," I wanted to respond to your comments. MayFair dedicated an entire day to Hispanic's on Friday. Our radio station was the host for several Latino acts beginning at 4:00 pm - 10:30pm. Even though the weather did not cooperate, we managed to attract nearly 1,000 local Hispanics to our main concert event. MayFair also reached out to us to coordinate other events for the weekend as well.

"MayFair was at risk of not happening at all this year. It has become too expensive for the city and festival coordinators to present. The difficult decision of charging admission was necessary in order to continue the event. This was the case last year as well. Our radio station was among only a few chosen to help MayFair with entertainment.

"My suggestion for you is to attend MayFair next year on the day they dedicate to Hispanics. You will feel much better!

"I appreciate your thoughts and concerns. You obviously share the same passion about the Hispanic culture as we do."

enjoyed your observations on mayfair. to have this event take place the same week congress is considering the immigration bill and the possibility of putting up a fence along our border was eery.

Thanks for the feedback. I suppose what really got to me was that, as I drove through the heart of Allentown, I saw a much different comminity than I observed at Mayfair. I think the organiozing officials could do a better job of makinbg the fair accessible to our low-income population.