Tax Relief? You've got to be kidding! 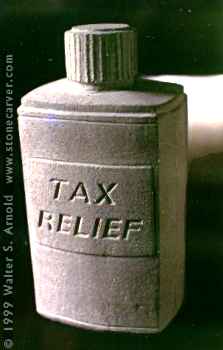 They call it tax relief, and will continue doing so until someone actually believes it. But no matter how often you call a pig a princess, it's still a pig. The state Senate is patting itself on the back, and the House will start congratulating itself later today. Soon, Governor Rendell will join the chorus, and they will all hail a "historic" tax relief package, hoping to con all of us long enough so that the real beneficiaries of this relief package - incumbents - can keep their jobs. They'll probably succeed, too.

The reality? No one will see any relief until next year at the earliest. Those who do will be low income seniors who will get a pittance of $250. The rest of us will have to wait for gambling bucks to roll in from seniors and addicts who play the slots. And by the way, school districts will still be able to increase taxes pretty much at will, no matter what they say about "back end referenda."

Unfortunately, the property tax reform package is nothing more than a glitchy re-election gimmick, as gaudy as the casinos we will soon see throughout the state.

If the state legislature were truly interested in real property tax reform, it would start with how properties are assessed. If a property is not properly assessed, it doesn't matter what kind of reform package is adopted.

Let's look at Northampton County. In 2003, a resident did an analysis of what was paid for property and how it was assessed. It appears that the more expensive the property, the lower the assessment! Look at the following table:

It's a system designed to benefit the wealthy minority at the expense of the rest of us. Until it addresses that basic inequity, the state legislature is gambling. It's playing the odds that it can fool us yet again. And the House usually wins.

The Guv is "outraged," but the state House did the right thing yesterday when it refused to vote on a re-election gimmick for incumbents that it laughingly labelled property tax reform. The package endorsed by the Senate does provide a pittance to seniors, but that's pretty much it. Runaway spending in school districts can continue under the current plan, which also fails to address inequities in current property assessments, the basis of all property taxes. Incumbents can no longer pretend they've delievered tax relief.

Now the true motive for rejecting the reform package is NOT some altruistic concern for the taxpayer, but a desire by House Republicans to embarrass Rendell. They've succeeded, but ALL of them are in trouble if they don't come up with a true tax reform package that addresses skyrocketing property taxes. So far, they haven't come close.

Morning Call state house reporter and blogger John Micek has a hilarious take on the re-election gimmick being foisted upon us as property tax reform. Gotta' love it.

These guys are just following the two decade tutorial of the guys in DC who terrorized seniors with the promises of Medicare reform and Prescription Drug Coverage. Now they finally delivered and unfortunately you need a PhD to understand it! The same will happen with state tax reform. People need to be careful what they wish for b/c they just might get it!

How about just rationalizing the whole tax system in the state. Just raise the sales and income taxes and eliminate all the others.

Can someone please explain to me why the Senate and House can't agree on increasing the sales tax?
I think thay are just a bunch of self serving weasels. Wait, weasels have spines, these losers don't. We all know they are just pandering for votes, I'm disgusted, I'll say more later

Greets to the webmaster of this wonderful site! Keep up the good work. Thanks.
»

I love your website. It has a lot of great pictures and is very informative.
»