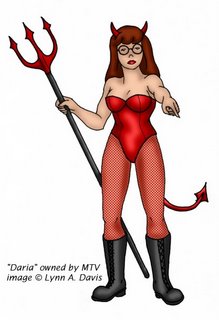 Bless me father, for I have sinned. Last night, I actually enjoyed The DaVinci Code.

Let me explain how this happened. I usually only attend matinees like Ice Age II or, most recently, Over the Hedge. I spend most weekends on baby-sitting duty, and can tell you anything you'd ever need to know about Curious George or RV. But both yesterday and today, as I ran yellow lights along Rte 248, I saw something I thought I'd never see at a shopping center -- protesters. At the entrance to this gigantic shopping center, which includes a SuperWalmart and Starbucks, three protesters stood in their Sunday best with signs I couldn't read. I was actually forced to stop at a red light so I could read one of the signs, telling me that fiction "is no excuse for blasphemy."

Two things bothered me. First, what the hell were they protesting? Over the Hedge wasn't really that blasphemous, except for that wired squirrel who kept talking about his nuts. Second, in this current age of terrorism, why didn't the Colonial Region Police shackle and use their stun guns on the miscreants who dared exercise their First Amendment rights?

I soon realized these folks were protesting The Da Vinci Code, a really lousy book. The story was great, but author Dan Brown is no Shakespeare. Of course, he has several best-selling books while I have this blog, so what do I know? But having read the book, I had pretty much decided against seeing the movie.

Those protesters changed my mind. Not too long ago, several LEPOCO members were actually arrested for distributing antiwar literature on a public sidewalk outside the Palmer Post Office. And I was kicked off the shopping center grounds myself a few years ago when I tried to distribute information about the child labor used to make those cheap bras and panties sold at Walmart and Kohls. Yet for some reason, those smiling bastards who looked like Stepford Wives with cheap bras and panties, were permitted to stand on the same sacred private property with their protest signs. I immediately decided to see the movie.

Now the movie itself is actually pretty good, and I'd recommend it to all of you, if only because I don't want to be lonely in hell. I won't go into any more detail than that about the movie itself. Ian McKellan is blah, blah, etc. See it yourself. You know the movie's good because most critics gave it lousy reviews.

So then, why am I writing this review? It's not about the movie, but the audience. I told you earlier that my movie experience over the past several years is confined pretty much to kids' movies, and that's pretty much during the afternoon. Let me tell you, those movies are pretty damn good. I saw Madagascar about five times, and King Julian deserves an Academy Award. Also, there wasn't a dry eye in the house when the lion died in Narnia. But what's really great about those movies is that most of the audience actually arrives on time and becomes silent as soon as the previews start.

Not so for the "adult" audience. I had to get up about five times during the previews and the first 15 minutes of the movie so that stragglers could move down my aisle and find a place to sit. About every 5 minutes, someone would check his cell phone, which made it seem like lightning bugs were all over the theater. And because everybody ate at a ton of popcorn and drank a gallon of soda, I had to get up about 10 times after the movie had started so that people could go to the bathroom. Most kids have the courtesy to just pee in their pants. On my left were two guys who insisted on talking to each other during the entire movie. On my right sat Jaba the Hut, and I thought he was going to eat me when he ran out of popcorn.

So although I liked the movie, we adults could learn a few lessons from our kids about how to behave during a movie. If we followed their example, we might actually experience some of their joy of life.

Great job, Bernie. Your review has convinced me to go see it.
My solution to all the activity in the aisles is to sit closer to the front of the theater than everyone else. My neck may get a little stiff, but at least I can concentrate on the movie.

Thanks Bill. I'll appreciate your column when we're both toasting marshmallows in hell. Look on the bright side! We'll both have lots of material.

Bill, It's quite an honor, by the way, to know that my favorite columnist actually read one of my blog posts. It must be a slow news day, but I suggest you call yourself Bill Black or something to avoid the inevitable recriminations that will arise from posting comments to this blog.

When I think further about our mutual future, I think we were both headed to hell before The Da Vinci Code reared its ugly(?) head. We've both been guests on Angle's radio show, so I'm pretty sure we're doomed.

I saw the movie this past saturday night and Bill, I do NOT recommend sitting in the front. I sat in the very first row (even being there 20 minutes ahead of time), my neck is still sore, and whats worse, 1 minute into the movie 3 thugs walked in and of course sat down right next to me. Cell phones ringing constantly, non-stop comments and laughter. They even screamed out in laughter when the nun got clubbed in the head. It ruined the entire movie for me and reminded me that stereotypes exist for a reason. The movie itself just didn't do it for me, quite frankly I like more blasphemy and sacrilege in my movies. Nevertheless, see you both in hell.

Dave, the poorer their eyesight, the better my chances.