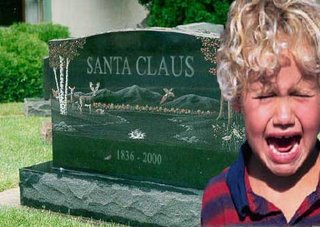 NORTH POLE - Global warming claimed its latest victims this weekend when Santa Claus and his entire team of reindeer fell through thinning ice at the North Pole, plunging to watery deaths. President Bush did send condolences to Mrs. Claus, but disputed claims that global warming caused St. Nick's demise. "Let's face it, Santa was fat. I loved the guy, but he was no Lance Armstrong. Maybe he should have spent a little less time eating Christmas cookies, and a little more time riding a mountain bike. Besides, the science is not in on whether the globe is warming."

Homeland Security officials actually breathed a sigh of relief. Secretary Chertoff explained, "This guy in a goofy red suit was dropping stuff off at millions of homes every year without so much as a 'how do you do' to customs. How do we know he wasn't dropping chickens infected with Avian flu? Ever think about that? Ho. Ho. Ho. What's so funny about that? And what's up with all that peeping through bedroom windows at little kids?"

ExxonMobil reacted to the news by immediately dispatching oil exploration teams. Drilling is expected in the next month, and oil industry officials predict big savings at the pump, possibly as much as a penny per gallon. One energy expert noted, "We don't have to worry about preserving reindeer habitat with Santa out of the way. Now they're as useless as an appendix." When asked about the dwindling polar bear population, an oil industry official said, "That's why we have zoos. And if people really need to see white bears, we can just grab a few grizzlies and spray paint 'em. Conservationists must learn to think outside the box."

Most world leaders did express grief, but this sentiment was by no means universal. Iran's President Mahmoud Ahmadinejad, for example, released the following remarks: "I dance on his grave - Santa Claus is a silly myth - we will wipe the North Pole off the map - right after we're done with Israel - arrrghh." Tehran officials privately acknowledged that Ahmadinejad was miffed after being placed on Santa's "naughty" list last year.
Posted by Bernie O'Hare at 5/09/2006 11:13:00 AM

You know, you switch a couple of letters around, and you get S-A-T-A-N. Those Iranians might be on to something. Hey, any truth to the rumor that the Iranian Soccer team in the World Cup has decided to call themselves the "Half-life Towel heads?!"

You know somwething, you're right. Not only did he vote in favor of $3 million for the road to Walmart, but did so after promising voters he would vote against it.

I will have more to say about Dertinger in the future. I believe that Dertinger actually reversed himself. He told voters BEFORE his election that he would vote against the $3 million road to Walmart, and then changed course AFTER he weas elected. He tried to explain it away by saying the road does not really serve Walmart, but we all know it does. I'll explore that.