Vonnegut & His Mothers' Day Card For My Mom 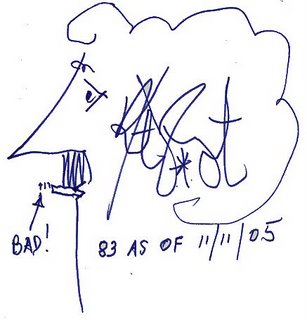 Rowhouse Logic today ran an excerpt from Vonnegut's Slaughterhouse Five. It's a little story about my mom. If I wasn't such a shitty son, I would have run this ditty myself on Mother's Day.

Kurt Vonnegut:
Mary admired the two little girls I’d brought, mixed them in with her own children, sent them all upstairs to play games and watch television. It was only after the children were gone that I sensed that Mary didn’t like me or didn’t like something about the night. She was polite but chilly.

“It’s a nice cozy house you have here,” I said, and it really was.

“I’ve fixed up a place where you can talk and not be bothered,” she said.

“Good,” I said, and I imagined two leather chairs near a fire in a paneled room, where two old soldiers could drink and talk. But she took us into the kitchen. She had put two straight-backed chairs at a kitchen table with a white porcelain top. That table top was screaming with reflected light from a two-hundred-watt bulb overhead. Mary had prepared an operating room. She put only one glass on it, which was for me. She explained that O’Hare couldn’t drink the hard stuff since the war.

So we sat down. O’Hare was embarrassed, but he wouldn’t tell me what was wrong. I couldn’t imagine what it was about me that could burn up Mary so. I was a family man. I’d been married only once. I wasn’t a drunk. I hadn’t done her husband any dirt in the war.

She fixed herself a Coca-Cola, made a lot of noise banging the ice-cube tray in the stainless steel sink. Then she went into another part of the house. But she wouldn’t sit still. She was moving all over the house, opening and shutting doors, even moving furniture around to work off anger.

I asked O’Hare what I’d said or done to make her act that way.

So we tried to ignore Mary and remember the war. I took a couple of belts of the booze I’d brought. We would chuckle or grin sometimes, as though war stories were coming back, but neither one of us could remember anything good. O’Hare remembered one guy who got into a lot of wine in Dresden, before it was bombed, and we had to take him home in a wheelbarrow. It wasn’t much to write a book about. I remembered two Russian soldiers who had looted a clock factory. They had a horse-drawn wagon full of clocks. They were happy and drunk. They were smoking huge cigarettes they had rolled in newspaper.

That was about it for memories, and Mary was still making noise. She finally came out in the kitchen again for another Coke. She took another tray of ice cubes from the refrigerator, banged it in the sink, even though there was already plenty of ice out.

Then she turned to me, let me see how angry she was, and that the anger was for me. She had been talking to herself, so what she said was a fragment of a much larger conversation. “You were just babies then!” she said.

“You were just babies in the war — like the ones upstairs!”

I nodded that this was true. We had been foolish virgins in the war, right at the end of childhood.

“But you’re not going to write it that way, are you.” This wasn’t a question. It was an accusation.

“Well, I know,” she said. “You’ll pretend you were men instead of babies, and you’ll be played in the movies by Frank Sinatra and John Wayne or some of those other glamorous, war-loving, dirty old men. And war will look just wonderful, so we’ll have a lot more of them. And they’ll be fought by babies like the babies upstairs.”

So then I understood. It was war that made her so angry. She didn’t want her babies or anybody else’s babies killed in wars. And she thought wars were partly encouraged by books and movies.

So I held up my right hand and I made her a promise: “Mary,” I said, “I don’t think this book of mine is ever going to be finished. I must have written five thousand pages by now, and thrown them all away. If I ever do finish it, though, I give you my word of honor: there won’t be a part for Frank Sinatra or John Wayne.

She was my friend after that.

I have read that book too many times and have watched the film. This part about a mother not wanting her sons killed speaks to us all.

That passage has been cemented in my head since the first time I read it. I've quoted it on my blog and Booman Tribune, on a number of occasions, because it has such power. It's funny, but I never imagined the possibility that I would ever hear from one of the kids playing games and watching TV upstairs. I was close to tears when I read the comments from you and Bernie O'Hare IV. Kurt Vonnegut has been my favorite author since I was a teenager, so it's a bit of a thrill to interact a little with you. Your mother's words to Vonnegut were as powerful as any ever spoken. I imagine they will capture the minds of people who will be born long after we are all long dead. If our species is very lucky, her words will one day seem far more abstract than they do today.

Most people aren't so thrilled to interact with me at all. It's funny, though, because it really hit me to see my mom portrayed both in Rowhouse Logic and Boomin Tribune. It meant a lot to me.

Bernie:
A voice from the past. I was a senior at Moravian. Your father agreed to an interview on his perspectives on Slaughter House Five. Our opening conversation was "rough". He really did not want to do the interview. I mentioned that I "understood" what Vonnegut was really saying about "time travel". Your father bluntly told me I had "no idea" about the concept. I told him I was wounded twice in Viet Nam. The whole mood of the interview changed. We talked for over two hours. I received an A on the paper and Eric Rodin marveled over the fact that your Dad gave me the "story". The passage from the book posted here generated some truely heartfelt dialogue between your father and myself about the concept of "lost innocence" as the result of participation in war. In later years he and I would sometimes have lunch in the Lehigh County Courthouse cafeteria. Your father remains a "hero" in my eyes and I am now "impressed" with the son. Take no quarter from those who want to abuse democracy.

Thanks for your kind words. They hit me pretty hard. My dad rarely spoke about the war or his experience as a prisoner. I could imagine my dad giving you a rough time at first. I'll share your comments with my brother and sisters. They'll like what you say. Take care.