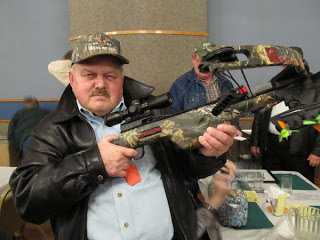 Northampton Community College is governed by a Board of Trustees that currently includes 14 members. There should be 15. Bangor's former School Board President, Pam Colton, was a trustee, but her term expired in June. Unanimously, the Bangor Area School Board selected Ron Angle to succeed her. But his nomination was killed. All school boards contributing to the college have a say. All but two had no problem with Angle. Bethlehem and Easton did. Because they kick in more money than other school districts, their No votes outweighed everyone else.

As you might imagine, Bangor's School Board resented having their choice rejected. Though Angle is an ornery bastard, he's their bastard.. That's who they want to sit on the Board of Trustees. So unanimously, the sent his name in again. Once again, this choice was fine with all but two school districts. Bethlehem said No, and at Easton's School Board meeting last night, the motion to nominate Angle died for a lack of a second.

Robert Fehnel, an Easton School Director, is the Chairman of Northampton Community College's Board of Trustees. The trustees, who enjoy their lobster dinners and filet mignons, are concerned that someone like Angle might spotlight what's really going on.

what's really going in is that Northampton Community College is sitting on a ton of money. Yet all the school districts it serves have to kick in every year. Bangor is paying close to $500,000. Other school districts pay more. This money was certainly needed when the college was first formed in 1967, but is it needed now. Angle has questioned this funding formula, along with former school director Bob Cartwright. Given the importance of education, this funding may still be needed. But you need people who will ask the tough questions.

A last night's school board meeting, there was no discussion of agenda matters. Items were lumped together and voted on together. This is because they were discussed in the back room or possibly at a committee hearing. When Angle's nomination came up, there also was no debate. Though one member did nominate him, it's pretty clear to me that Fehnel blackballed him in private discussions.

Ron was there, dressed in suit and tie. He spoke in support of his nomination, saying he would bring his knowledge of finance to the community college. One board member actually laughed at him.

Under state law, "The composition of the board of trustees shall be representative of the geographical area to be served by the college and shall include members of the professions, business, industry and other organizations or lay persons." Thanks to the weighted votes of Bethlehem and Easton, the slate belt is being denied representation. The board is also short of entrepreneurs. It's also short of true fiscal conservatives. The college hypocritically brags that it promotes "diversity and inclusion," but that pious platitude has no application to conservative viewpoints.
Posted by Bernie O'Hare at 11/28/2018 12:00:00 AM

If NCACC is sitting on a ton of money, they should use it to pay their adjunct instructors - who make little more than minimum wage.

Actions have consequences. The way Angle has acted and treated people in the past appears to have caught up with him. If he’s the only “true fiscal conservative” and “entrepreneur” in Bangor then Bangor has a problem. They aren’t being denied representation- they are free to nominate someone else.

The only board Ron should be on is the local chapter of the KKK!

Ron was Trump before Trump. There's apparently been some recoil.

Nazareth also voted him down

Poor Ron..so sad to hear of his demise. Karma is real.

I was unaware of Nazareth.

The are afraid of what Ron Angle will expose. So the Bangor school taxpayer is denied representation when it isn't what John "douche" Reinhart wants and the Easton School Board? That's BS and then again look at Bangor Area's School District Boards leadership.... Lead by the local well known "Firehouse Drunk" and second in command is the "Village Idiot". Angle for sure got screwed over because they know he will expose and work for the taxpayer's and students. He saved Bangor a half million is fee's alone when he did his most recent stint when they were all lined up for a good buck... aka the bond guy and solicitor.... They might have it backfire and have awoken a sleeping giant!

I guess Mr. Angle cannot provide the "benefits" the predecessor to this seat was able to provide certain board members at NCCC. She is quite umm well known here in the slate belt and school district.

He is reaping the hate he sowed for years.

Sherwood Grigg is not a drunk good thing you dont ID yourself otherwise Griggy would hit you with a defamation lawsuit and you'd be forced to sell plasma and rent Uranus just to get by.

Me ,myself like the Angle think the school boards are full of incompetence. EASD is out of control for example. They have No respect for the the tax payer. They think they can do whatever they want. . Mr Angle was a thorny horn in Bangor ,then he he helped them reformed. . Now they love him . I think that district votes against him are because he will expose frauds and costs issues and some of the members are involved in price issues for their own advancement. So- you get what you deserve. I know EASD is not looking out for the people that pay taxes. Costs are evident, illeagals are vacating the schools should be be closing some grades now. This district harboring illegal immigration cost us plenty. ,we should indidit school administrators that allowed this.

Remember when Ron got the drilll out and advanced to the employees file drawer, that got everybody s attention. We will see-after it all fell out , So - now Bangor wants him to be a NCCC board member. Wow - you can’t name any other school board directors,from any other districts. Shit would hit fan and the “Numb-school “ folks can’t deal with integrity issues because Ron Angle will call them out on it. Yes or no ?

This is an easy one. From the past of Bangor's bottom of the barrel is John Reinhart for Easton and another doof Michael Baird for Bethlehem. Both are bottom feeders and Bangor rejects with axes to grind with Angle.

Angle gets what he deserves..no respect! No vendetta needed as his reputation speaks for him..from the past..even now. The Bangor school board is as dysfunctional as the EASD so don't go there. Colton was nearly as bad as Angle was while she and Angle were members of the board for many years. Maybe that is why Bangor nominated him. Line of succession. Slate Belt rubes not too bright as things go.

Well, this is a real shame. I know that if we had put Ron in as County Executive, Northampton County could be well on its way to becoming great again. Who knows, maybe even as great as Lehigh County one day.

10:41.... the big difference between Angle and Colton is that she got a useless do nothing job for her sister and do a right to know and see what scholarships her kids got that those that were entitled were passed over. She was all about Pam and her family with a sketchy personal life for sure. Its sickening to know only some or her torrid background that she has so hurt her family and kids with.

2:36..thank you filling us in on Mrs. Colton..another fine representative of the SB region.