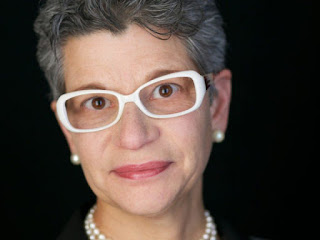 In her time as Magisterial District Judge, Antonia Grifo has played a crucial role in seeing that the law is applied evenly to everyone, including those who have never had much of a chance in life. I am sorry to report that she has decided to step down.

It is with mixed emotions that I announce that I will not be seeking reelection to the seat of Magisterial District Judge for District 03-2-05 for the term beginning January, 2020.

It has truly been a pleasure and a privilege to have served our District as Magisterial District Judge these past five years, to have worked with my fellow MDJ’s and to have played a part in Northampton County’s judicial system.

I will be returning to practicing law in my limited estate practice, however, I will continue to serve my community as I increase the time I spend volunteering in a variety of not-for-profits devoted to the betterment of Easton. I also look forward to the ability to be politically active in the community and beyond, which I have not been permitted to do as a sitting judge.
Posted by Bernie O'Hare at 11/08/2018 12:00:00 AM

I don't know this judge or anything about her. She has my respect, however, for admitting that what she would like to do and what she might realistically be able to do don't match.

A class act, she will be missed. Should be an interesting election to fill the seat. Any favorites?

This will be a Lebanese free for all: Tony Basile, Anthony Jabbour, Alex Joseph, Sharbel Koorie, and Peter Melan are some of the possible candidates who live in the district.

If that is the case, they will cancel each other out. And Fr. Alex is a priest who lives in another state. Peter Melan reportedly is running for Mayor. Sharbel might give it a shot. There are lots of good choices out there. It is very classy of Antonia to announce her intentions so that as many people as possible can weigh their options.

I once met her mother in a doctor office waiting area.. A very kind and friendly person.

Our next judge will be Lt. Robert Weber of the Easton police dept. He has already completed his minor judiciary certification & is very well liked by many in the community. He should do well if he runs and will make a fine judge. My only issue is should/can he preside over his own depts. cases? Should they be transferred to avoid any conflict of interest? what do you think Bernie?

Legally, It's no conflict. I think it presents some bad optics, but know many police officers who went on to become very fair MDJs.

Bernie, Charbel Koorie and Alex do live outside the new district. For Tony Bassil the rumor is He's running for County Controller.As far as the 'LT.', he has a leg up ,its a small town and he is bigger than to play games.

Lt. Weber or Wheeler Dealer could be too. As for Grifo, not a single EPD officer likes her or the way she does things. Eccentric is an understatement. Wish her the best I'm glad she's moving on to bigger and better things!

She’s not there to be a patsy for Easton cops, who could do a better job of presenting a positpublic image. The Facebook page is horrible. At its current rate, it should lose certifification.

Bernie, I would like you to addressed school security soon. I have addressed this issue with letters and face to face conversations as fareback as 2003.i addressed this with An administrator in the EASD that had everybody thinking he was a former Marine. Failure. This situation was interesting,as the adminstator should have been impeached. We spend money but we fail to test the system. I and we have offered . I have posted early ,that the active shooter needs to be confronted by the best qualified person to enter a building. That could be a Fish and Game officer traveling by and I say would probably be a great shot under stress. I know what Constable shooters are like and Sheriffs Deputies under the PPCD qualification system . And I once shot against the firearms director of the PCCD for this Commonwealth and edged him out at firearms match 8 guns in 5 lanes about 2008 in Western Pennsylvania. Tony Gramelly the White House Secret Service firearms training director at the time was there too. So - I say , The guard at the school needs to be tested , a quantitative evaluation is important just like when we were doing nuclear security on aircraft and nuclear bombs. They tested pus all the the time to see if they could breach us. — without getting shot. Principles are the same , you can’t hire relatives if we need to be effective. I have intuitions all the time . Bernie ,I plead with you - please look into this issue. It’s a matter of public interest but also costs. Im old and slow now .