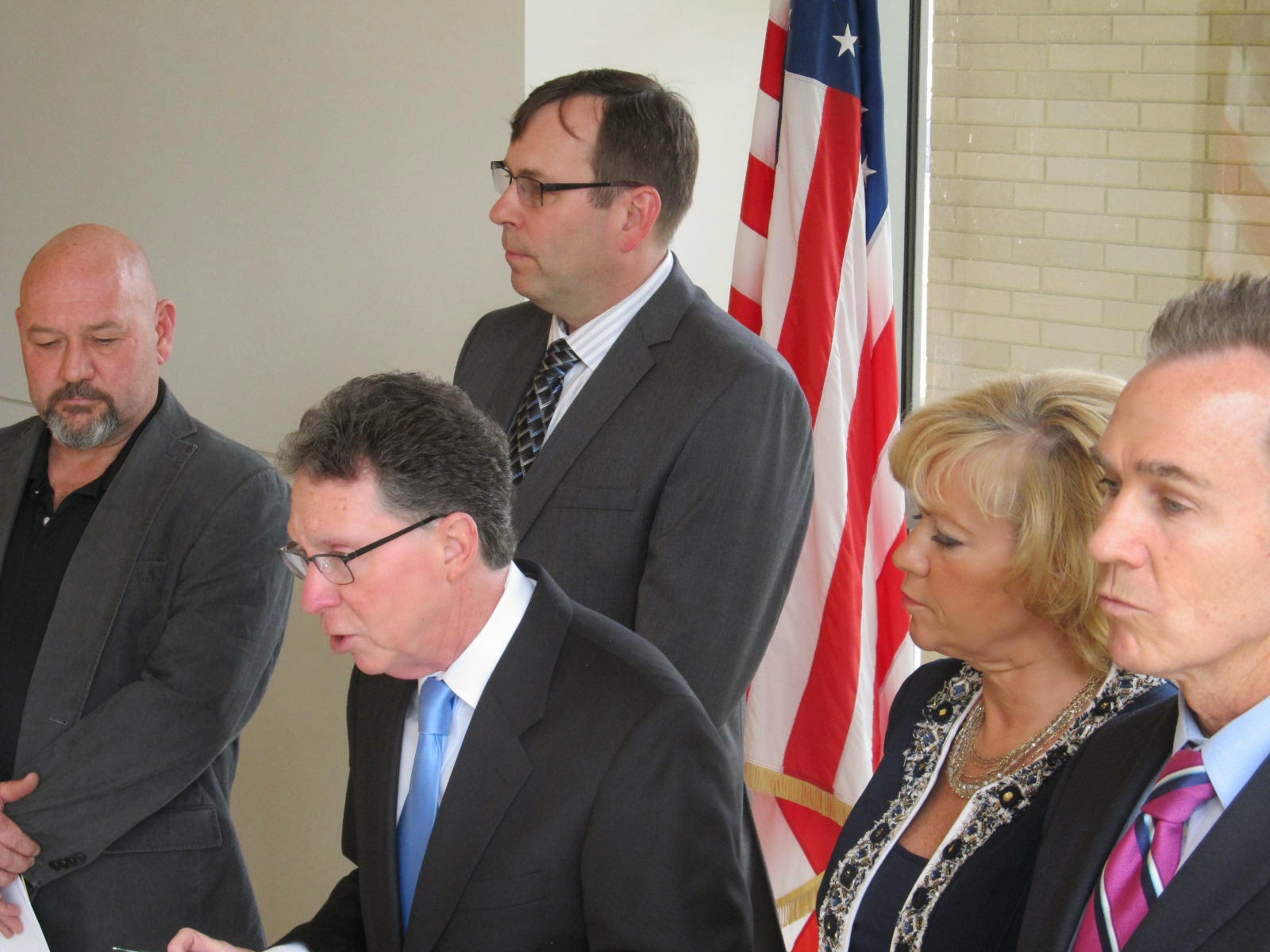 Pennsylvania has a strange-sounding law that most of you probably never hear called the "Construction Workplace Misclassification Act." The latest version, effective for the past three years, is designed to prevent unethical contractors from claiming that their employees are "independent contractors," or just letting them work "off the books". This deprives the government of tax revenue and hurts businesses who play by the rules. Most importantly, it hurts the worker, who is denied the protection of employment and labor laws. Though Governor Corbett pledged to abide by this law, enforcement has been nonexistent. That's the reason for a news conference in the Northampton County Courthouse lobby yesterday, featuring several officials and labor leaders. One of them,State Senator Mike Stack, would like to be the next Lieutenant Governor. He picked up some big endorsements.

One of these big endorsements came from Northampton County DA John Morganelli. He claimed that Governor Corbett has been "asleep at the wheel" while the law has been ignored. Another endorsement come from State Senator Lisa Boscola, who said that this lack of enforcement has created an "uneven playing field" in which we all pay for out-of-state contractors who thumb their noses at the law.

Both Morganelli and Boscola scoffed at the Department of Labor and Industry's lack of enforcement. Though the law gives the state the authority to impose administrative fines of up to $2,500 per violation and to issue stop work orders, they complained about lax enforcement.

The Labor webpage indicates that 29 complaints were received in 2011, but fails to state how those matters were resolved or identify the construction companies involved.  There is no information listed at all in 2012 and 2013.

Senator Stack, who thanked Morganelli and Boscola for their endorsement, stated he called the Labor Department several weeks ago to learn what happened in 2012 and 2013. "I'm a State Senator and I don't know. The silence has been deafening"

He complimented Morganelli for investigating a recent complaint on his own, although Morganelli stated his office has no authority to issue stop work orders.

Stack would like to amend the law to reimburse District Attorneys who undertake their own investigations, calling Morganelli "a true defender of justice" who is "trying to find a way up and out for people."

Kevin Lott, a Business Agent with the Carpenters Union, pointed to a recent study of a similar law in new York.Last year alone, New York's Department of Labor identified 24,000 instances of employees being improperly classified as independent contractors. This translates to $330 million in unreported wages and $12.2 million in unemployment insurance.

"It's a fairness issue," noted Lott, who pointed out that poor enforcement has caused three problems in Pennsylvania. First, the contractors who are cheating have an unfair advantage over those who play by the rules. Second, these cheating contractors are hurting workers, many of them already vulnerable, from important protections. Finally, the state is losing an important source of revenue.
Posted by Bernie O'Hare at 5/14/2014 12:22:00 AM

See Boscola had some work done.

Maybe the State Senator should be meeting with her campaign treasurer to file her over due (FIVE WEEKS and counting...) finance report before making any more appearances:
https://www.campaignfinanceonline.state.pa.us/pages/CFFailedToFileList.aspx

He also wants to kill directional drilling with a crippling 10% tax that he'll give to teachers unions. Cawley for LG.

All that facial cream is finally paying off, with some minor surgery here and there.

6:20, Her report was timely filed. She does what most pols do and files a paper copy. She does what many pols do not and files a courtesy copy in both LC and NC. To my knowledge, and i check these all the time, Lisa Boscola has never been late on a finance report. Never.

Boscola is a politician and this I have to allow these anonymous personal shots. But let me point out three things.

1) They are sexist shots. You would not say this if she were male.

2) Instead of mocking how someone looks, it makes more sense to me to criticize someone based on his or her stands. You diminish yourself.

3) Boscola obviously cares deeply about her personal appearance, which is a sign that she respects herself. That is a very positive thing.

Pubicus, I don't know how much you are getting paid to shill the NIZ, but I resent it very much when you post a completely OT comment and link to your blog here. Please don't do it.

Sorry about the blog post Bernie, but, you know that I would help you get started over on my blog :)

Actually, you wouldn't. There is no link on your blog to my blog or Molovinsky. If you want to be linked, this is not the way to do it. You could just send me an email and ask. You could also reciprocate.

Thanks for the info buddy. I'm still new at this. I will permanently link you and Mr. Molovinsky and I have linked to your articles (though we disagree).

"Though Governor Corbett pledged to abide by this law, enforcement has been nonexistent."

"He claimed that Governor Corbett has been "asleep at the wheel" while the law has been ignored."

One can't make up funnier quotes than this. Not enforcing state laws is the new black. Politicians are only required to enforce laws they like.

This guy doesn't stand with Pennsylvania union laborers. He stands with those who want to kill union jobs, as does every Democrat seeking statewide office. That's why Stack and other job killers have a big problem:

Why do you allow that imbecile to post her insane jibberish?

If it continues, she will end up on the wrong side of a harassment prosecution. I have already been contacted by authorities who seem to be put off.

Contractor fraud is just as bad as the political fraud that goes on every day in Harrisburg.

Notice how Krafts head is up His ass???