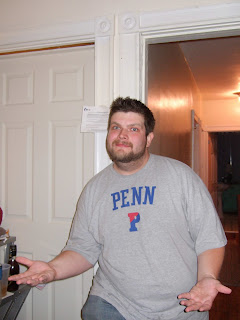 Earlier today, I told you six people are seeking appointments to two vacant seats on Easton's city council, including the mayor elect's wife. All but one - J. Spike Rogan - have held or sought public office before. This post is about Spike, whose comments you can read here and at Easton Undressed.

Spike is a frequent visitor to Easton city council, and once attended a council meeting against his doctor's orders. He stayed out of this year's city council race so he would not draw votes from El Warner, who won. "I am 28 years old and can bring youthful energy and interest ... It is my generation that soon must take over the reigns and make Easton a great place for centuries to come."
I have just one question for Mr. Rogan - Are you out of your frickin' mind? Do you know of any councilman, anywhere, on this planet, whose name is Spike? That name makes me think about rabies shots, not government service. And dude, do you honestly think a city council will appoint a blogger, especially someone who decides to post Saddam's execution in "full clear?" I'm still having nightmares over that, thank you very much.

To his credit, Spike did answer a series of ten questions posed to candidates by Easton Undressed, and you can read his responses here.

Is Easton ready for J Spike Rogan on city council?

I thought I was nice to you!

lol you were, thats the best part.

Hey I hope no one forgets the Saddam moment. Its a dark shadow on Justice in American History.

He was handed over to a lynch mob like something circa 1888.

I have nice hair in the pic though.

Tell your spies thanks.

That photo would make for a great caption contest!

I quess I would not be allowed to take part in that. lol

Why not? You'd probably come up with the best ones!

Is it just me, or does he look exactly like John Kruk?

Spike Rogan would be an outstanding addition to the council. He has Easton's best interest at heart.

I was about Spike's age when I first applied for a council vacancy. I hope Spike does apply for this vacancy and then will consider running for a seat in the next election. We do need some younger people involved in local government!

bernie you are racist against spike lee and spike tv :):):):)