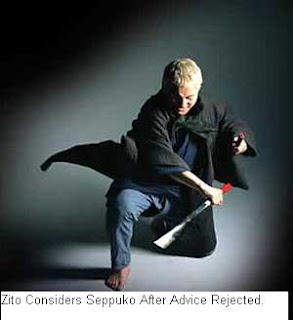 Who is Lenny Zito?

Lenny Zito, a former judge, is Northampton County Council's solicitor. I knew him when he was a much younger guy. In addition to being a very bright lawyer, he was a tough son of a bitch who didn't back down.

My dad, another strange but bright litigator, used to delight in pissing him off. If Zito called my dad about anything, he'd ignore him and wait for the snippy letters and threats that invariably followed.
This one is my favorite. Short and sweet.

"Thank you for the courtesy of not returning my call."

When my dad finally decided it was time to speak, he'd sit back in his chair with phone in one hand, Pall Mall in the other, smoke slowly circling his desk. He'd act like an innocent altar boy, but with a shit-eating grin on his face.

"Seven letters? Gee, I don't think you sent that many, Lenny."

"No, I was never told you called. Well, now that you're on the phone, what's up?"

Although I know my father took some perverse satisfaction in this, it was actually pretty smart. He never told me this, but I think he was playing on Zito's passion to throw him off his game.

Either that, or he really was a miserable bastard. Either way, it was always funny to watch.

That tactic would fail today. I've seen Zito on the bench and over the past 1 1/2 years as Northampton County Council solicitor. He is now The Iceman. The brash young lawyer is gone, replaced by a smooth litigator. He's mastered his inner demons. He quietly and firmly states his opinions, shows no partiality and has given county council excellent legal advice. He's also added some class to an otherwise classless body.

He's still a partisan. He's contributed $15,850 to fellow Dems seeking state offices over the past six years. But even Republican Ron Angle backed off when Zito advised council members they could not go in the back room to discuss some vague litigation.

Council Prez Wayne Grube was really happy to latch onto Zito, easily in the first tier of Lehigh Valley lawyers. "Boy, were we lucky to get him!"

They were. They just don't realize it.

A few weeks ago, that myopic group short-circuited the bidding process for the county's information technology services. There were three proposals on the table, but two had to be rejected because of technical defects. The surviving bidder, recognizing it was $1.5 million higher than the lowest bid, told the county it was willing to negotiate for a lower bid, but the county could not legally do that. All three bidders were willing to submit new proposals. So the administration, acting in the "best interests of the county," decided to start the bidding process over. All bidders agreed to that. But incredibly, council voted against this. They were actually more concerned about fairness to the bidders than they were about taxpayers.

Two people were absent that evening, Ron Angle and Lenny Zito. Only Council Prez Grube was concerned about the taxpayer.

The stupidity of this decision was quickly condemned by both The Morning Call ("The County Council majority made the wrong decision here, and so far, they have not been able to explain why.") and Express Times ("Northampton County Council thumbed its nose at the taxpayers last week when it ignored the wishes of the administration and awarded a computer contract to the high bidder.")

Personally, I think that small-minded group tried to stick it to the county taxpayer for two reasons. First, the low bidder is a major contributor to Republicans, and council saw an opportunity to pull a "pay to play" in reverse. Second, they wanted to embarrass County Exec John Stoffa, who won't play their political games.

Council's Lawyer Tries to Save the Day

Fortunately for county council, Lenny Zito came up with an excellent legal strategy to deflate this crisis. His opinion is that the county exec has the unilateral authority to reject bids on his own. When the exec asks council to reject bids, their function is advisory only. The real power lies with the county executive. He flatly told council they have no supervisory authority over the bidding process. Zito had told President Judge Freedberg he would ask council to accept his opinion.

Council Refuses to Accept Their Own Lawyer's Opinion

Amazingly, by a 5-4 vote, council refused to accept their own lawyer's opinion. Ann McHale, Charles Dertinger, Lamont McClure, Diane Neiper and Tony Branco just couldn't bring themselves to admit they had made a mistake.

Do you want to hear their ridiculous rationale? They were worried that accepting their own lawyer's advice might "set a precedent."

But McHale's behavior was the most disgusting. She's apparently concerned at how her vote to throw $1.5 million away might affect her chances as the next county exec.

She falsely tried to credit herself for actually saving the county money. When that fell flat, she tried to blame the administration for council's stupidity, claiming we need to look "at how we do business. This never should have occurred." Grube told her this problem could not be blamed on Stoffa, and Angle pointed out that Stoffa was just being courteous to council by giving them an opportunity to reject bids. McHale shouted, "Nice guys finish last."

I can't wait to hear how that sounds on the airwaves when McHale runs for county exec. That should really help her campaign.

With some justification, council has criticized Stoffa's penchant for forming "blue ribbon" committees to deal with county problems. They tend to be slow and unwieldy. So guess how council decided to deal with Zito's opinion and their fear that listening to their lawyer might set a dangerous precedent?

Why, a committee, of course!

Neiper made that call, and castigated Stoffa for "going to the press" on what they themselves had decided in a public meeting. Lamont McClure told council his law and order committee has had a "lot of success in dealing with tough problems." That's why it's only met once this year.

Stoffa will ignore the children on council and rebid the project. As he told Sarah Cassi at The Express Times, "It's the right thing to do."

Zito, who has been spurned, won't represent council any further in the Angle litigation. He quietly made his point. He didn't even get mad. But whether they know it or not, council is now twisting in the wind.

Angle will pursue his litigation.

A court order will find that county council engaged in a "flagrant abuse of discretion."

And that will be the first time that has ever happened to a Northampton County council. How's that for precedent?
Update: In addition to what he told Sarah Cassi, Stoffa made the following remarks to The Morning Call's Joe Nixon: "They [council] can do what they want to do. I answer to the taxpayers, ultimately. It's interesting that none of this discussion talked about the amount of money that would be spent."
Posted by Bernie O'Hare at 7/13/2007 02:40:00 AM

isn't it more likely that the court will find the issue moot, consistent with Lenny's opinion?

What you failed to report Bernie, is that she then threw a flash pellot onto the ground and disappeared, with a trailing voice saying, "I'll get you next time Gadget".

Seriously, what does "Nice guys finish last," mean in this context?

Not moot for the following reasons: 1) some of those idiots think they do have supervisory authority over the bidding process; 2)since this involves the "best interssts of NC," the argument can be made this is an issue of great public importance, which is an exception to the mootness doctrine.

LVDem, They're all nuts. But last night, it was McHale's turn to be the head nut. What she said and the way she acted, will come back to haunt her.

You know McHale is desperate when she starts quoting Green Day lyrics...

It was really disgusting, and it was obvious they were all simply trying to avoid taking responsibility for a $1.5 million blunder. McHale tried to credit herself for negotiating a $500,000 savings in the current ACS contract, which was actually something between ACS and Maziotti. When that failed, she falsely claimed that ACS was throwing in $400k in computer hardware, an assertion that Maziotti quietly denied. It was obvious that, behind the scenes, she was in contact w/ ACS and very much wanted the work steered that way. As she continued to look like an idiot, she started complaining abvpout the terrible way Stffa does business.

And her "Nice Guys Finish Laugh" rant is a tape I will buy.

they just don't get it.

Stoffa doesn't Lie??? What planet do you live on???

On planet Nyce/Reibman, Stoffa may be viewed as a strange thing. On planet earth, he is a Godsend, and last night is just further proof. Next to that vain and petty bunch on council, he looks pretty damn good.

Unless you have personally been back-stabbed by him.

"...what does "Nice guys finish last," mean in this context?

Ron Angle said that Stoffa was being courteous to County Council by bringing this contract to Council and asking to rebid the contract. She retorted with her now infamous answer. Whether that was a dig to Stoffa or she was saying that Council got dinged, I'm not sure.

It doesn't matter. Right after she said it, the audience had their own definition. Nice guys (the taxpayers) finish last. And there you have it.

Hey, does he want to run for Congress?

It,s not a shock, she pulled the same deal with the Health care contract and the new Blue Cross provider. Made a big crusade for how all this money would be saved. Check your paycheck we are paying more for same coverage with higher deductables. That was under Reibman so everyone will defend it as oh she did a good thing. It doesn't matter what they or that phoney consultant say, the proof is in the coverage.

No friend of the employee. Give the $$ to the contractors.

I always regarde McHale as a bit imperious, but as someone who really cared about the employee and doing the right thing. But Thursday night, I was astonished to find she is just petty as mean-spirited. I could not believe how she vainly attempted to credit herself for something she didn't do, and then proceeded with "Nice guys finish last."

Yes, she did claim employees would save money with the new health care provider. i remember that. If that has not come to pass, you know who you can thank.

Actually, that's exactly what this party needs - people like that who are very well qualified and who come out of nowhere. Perhaps it party leaders stopped "clearing the field" for a chosen few, we might experience some real democracy.

Hey BO, does Zito have the GUTS for SEPPUKO. I mean it takes a pretty sharp blade to pull it off.
GET IT GET IT. yuk, yuk, yuk, I crack my self up. I'm such a cut-up.

I'm sorry, I will now go and drown myself in Saki.

Just tried it, and I popped like a balloon and flew around Nazareth, ending up in the skatepark.