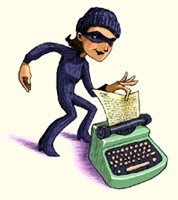 Tony Phyrillas sure likes to blow his own horn. In his blogger profile, this city editor and columnist at The Pottstown Mercury claims to be a "leading conservative columnist and blogger based in Pennsylvania." He brags his columns are featured on over two dozen political web pages. He's one of the leading Greek-American bloggers in the whole wide world. He even went to college!

His blog, incidentally, is imaginatively called Tony Phyrillas. He's here in Blogistan to give us the "common-sense viewpoints of a conservative journalist working in a liberal-dominated media."
Gee, thanks.

But some of his "common-sense viewpoints" aren't really his.

In a Saturday post, Phyrillas gives us a hilarous rendition of state mottos. They're really pretty funny. Maine's motto, for example, is "We're Really Cold, But We Have Cheap Lobster!"

I've waded through a few of Phyrillas' missives, and his humor meter is right up there with Lord Voldemort. So how did he all of a sudden get so funny? Simple. He just lifted those state mottos from the Internet. They're plastered all over the place, from here to here to here. That would be fine, but he fails to acknowledge anywhere that he borrowed these laugh lines from the net.

Plagiarism, according to Wikipedia, comes from the Latin word plagiare. It means "to kidnap," and is defined as "the practice of claiming, or implying, original authorship or incorporating material from someone else's written or creative work, in whole or in part, into one's own without adequate acknowledgement." Thanks to the Internet, it's a lot easier these days.

There are some funny bloggers out there, including Bill White, Joe Owens, Jim Deegan, and Dear Maddy. Guess what? They write their own humor. If they steal a line, they at least have the decency to acknowledge it.

Call me wacky, but I've always been under the impression that plagiarism gets mainstream reporters fired.

What's the motto at The Pottstown Mercury? "All the news we can steal from the web"?
Update: Phyrillas alters his original post! After being tagged for misrepresenting something he lifted from the net as his own work, Phyrillas has done some damage control. Rather than simply apologize and do a clarification. Phyrillas has added a preface, today, to a post dated Saturday. "This is one of those lists that gets passed around via e-mail. Not sure where it got started, but it's very funny." He continues to mislead readers, after caught plagiarizing, by conning them into thinking his explanatory comment had been there all along.
Posted by Bernie O'Hare at 7/30/2007 12:15:00 AM

I like your blog alot:) interesting.check out my new strange newz blog if you get a chance. Love to hear other bloggers feedback and ideas.

Whenever I use something I find on another website, I provide a link - even if it's not the original source, I show where I found it.

Happens to me all the time. I can cite 4 stories in the last year that I had first that the rags ran a few days later without attribution. But of course they had they're "OWN SOURCES." The Joe Peters story is the latest.

What bothers me is that a MSM columnist has actually stolen 50 lines and misrepresented them as his own.

Careful Bernie. You're about to be labeled as a liberal from the Lehigh Valley. That's what Tony calls his detractors from the ABE region.

Tony's very open partisan activity calls into question the credibility of his newspaper. He's viewed as a hero on the right b/c they have been trying to inject right wing ideology into MSM for two decades and Tony is glad to be the banner carrier. True journalists, to him, are part of the liberal establishment.

This has nothing to do with his ideological leanings. This has everything to do with misrepresenting the work of another as his own. I can't think of anyone from either of the local papers who would do that without acknowledging it is not their original work.

It is unethical. It's just state mottos, so some may say "what's the big deal?" To me it's a big deal bc if Phyrillas makes misrepresentations about this, how can I trust anything else he says?

I know it has nothing to do with ideology for you and me Bernie. I don't care about the leanings of columnists or editorial boards. I just like knowing that I can trust their work as being honest. But Bernie, we both know that on either side of the extreme political spectra, intellectual honesty and ethics have very little room in the conversation. It's about blood and winning (or at least making the other side look really dumb). I have profound respect for people like Bill White who at least takes his role seriously. Don't always agree with him, but he's at least not going to give me his plagorized term paper and tell me he wrote it all by himself.

If it's about making "the other side" look dumb, Phyrillas just managed to do that to himself.

Bernie, what troubled me is that he is alao an officeholder and apparently is running for re-election, with a link to his campaign website on his blog. I'm willing to have an open dialogue and respect what he has to say, even if I disagree with it. But that campaign link, and his role as a journalist, gives me a queasy feeling.

I did not know that until late last night. The online edition of his newspaper links to his blog, and from there his blog contains a link to another site concerning his reelection to Mount Penn Borough Council.

This is probnably worse than what I was complaining about in my blog. The Society of Professional Journalists, believe it or not, as a code of ethics.

This code of ethics also states a journalist should "never plagiarize."

I broke that rule once. I accepted a free beer at a Freemansburg pub after I mentioned them in an article for the Express-Times.

I haven't been the same since.

But any journalist who has to plagiarize is not a journalist, just a jerk with a shared opinion.

"Careful Bernie. You're about to be labeled as a liberal from the Lehigh Valley. That's what Tony calls his detractors from the ABE region."

Keep up the good work and strolling your blogroll, thanks for the linkage. I'll reciprocate right now.

Tony Phyrillas wrote: "And I know I've arrived because one of those left-wing attack blogs has decided to target me today. (Could the fact that this very same blogger dropped from No. 8 to No. 12 on this week's list have anything to do with it?)"

I was going to reply by saying "No, it's because you're an idiot," but I didn't think he was worthy of the priviledge.