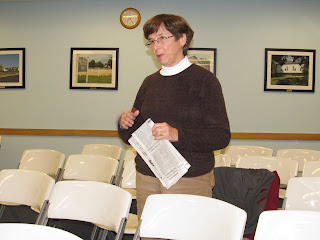 Wherever she is, the late Emma Tropiano must be smiling. While serving Allentown City Council in 1993, she proposed an ordinance that would prohibit the use of old sofas and easy chairs for lounging outside. Her measure was rejected. But at their February 8 meeting, Hanover Supervisors unanimously adopted Emma's law.

They had a little help. Solicitor Jim Broughal drafted the one-paragraph law, which prohibits the use of primarily inside furniture "on the exterior of any real property if it is a threat to the physical appearance, safety or public health of the Township."

Nobody complained about Emma's law in Hanover Township. Only one person, Marlene Malloy, addressed Supervisors, and her concern was that the law "does not go far enough."

In other business, Supervisors unanimously approved a conditional use for Vegan Treats, clearing the path for popular vegan baker Danielle Konya to move from her current location in Bethlehem to 310 Stoke Park Road. "I don't know how many more days 'till we get our Vegan Treats," remarked Supervisor Glenn Walbert.

Zoning changes proposed at 2351 Jacksonville Road, owned by the Masteller estate, were delayed until a consolidated deed of numerous irregular tracts is presented to the Planning Commission. Supervisor Steve Salvesen cautioned against a driveway on Jacksonville Road.
Posted by Bernie O'Hare at 2/09/2011 12:33:00 AM

Only weeks ago yet another Morning Call reporter lambasted Emma for her point of view on indoor furniture. What that reporter and endless others fail to ever mention is on Emma's own home block, her neighbors were a microcosm of the city's rich and cultural diversity.
Why doesn't the same reporter ask them or is it easier to celebrate "dirt" and sell papers? Also, it would be interesting for the same reporter to interview a certain college professor now.

B O I know this is OT but if you won you have posted something by now. Where is your story on Judge Barratta's decision that the signatures stand and the Save Gracedale movement lives to fight another day. My favorite quote Councilman RA and Blogger BO failed to prove their argument. Don't worry BO batting last for your team is Stoffa. Bring it!!!!

I will read the decision, and then will comment.

oh when you loose you have to read the decision, when the Mcall shares your viewpoint it is good enough to run with. I got it clear as mud!

Indoor furniture used outdoors is no longer legal in Allentown either.