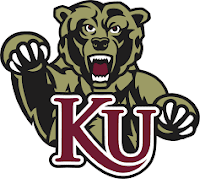 On Monday, I told you that Muhlenberg College is inarguably one of the top D3 football programs in the country. It has advanced to the final eight in the NCAA D3 playoffs. I was taken to task by a reader who noted that the 11-1 Kutztown Bears, a D2 squad, "are by far the best team in the area."

I never considered KU because it is outside of the Lehigh Valley. But that's my bad because so many local residents are alumni.

Kutztown, like Muhlenberg, is also playing in this year's NCAA tournament, but on the D2 level. Both teams are in the final eight of their respective levels. Kutztown will be hosting Sherpherd University (W Va.) on Saturday at noon.

The national championship will be played December 18.

Lots of great local kids at Kootztahn. Good luck! They'll need to play their best game(s). In D2, NW MO State and Valdosta are powerhouses like Alabama and Ohio State in D1.

He is going to Lafayette