Be Nice to School Bus Drivers 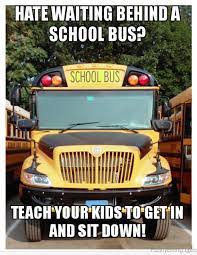 The Nazareth Times, a self-described hyper-local and digital publication on Facebook, invites all members to post on topics related to Nazareth. One of them, Rob Cruz, posted a lengthy essay about the difficulties he faces in his job. He's a school bus driver. You may have noticed we have a driver shortage, and Cruz' story, along with numerous comments from other drivers, help explain why.  You might think it's the money, but it appears to be more about respect.

According to Cruz, "My job is to transport your child from point A to point B safely. That is all. What do I mean when I say safely? Let me explain. Safely means I pre trip my bus to ensure it is running properly and that it hasn’t been tampered with. Safely means my eyes are constantly scanning all 7 mirrors, blind spots, and the road in front of me. I’m NOT a babysitter. I’m NOT a mediator. Im a BUS DRIVER."

Cruz and several bus drivers who added their own two cents not that kids this year might be a tad more unruly after sitting inside their house for a year. But it goes beyond that. Cruz adds that there are parents "hulking" at bus stops who yell, scream and curse at drivers. "[P]lease understand you have now added to the problem[.] [Y]ou may think you are just protecting your little baby but really you’ve just shown your children, AND the remaining children on the bus that you can speak and act however you want to WITHOUT major consequences."

I decided to call a friend who drives a school bus for special needs children. He confirmed everything Cruz said, although he noted that most of the students he drives are younger and well-behaved.

My friend (I forgot to ask if I could use his name) indicated some parents might be upset at the school district and take it out on the driver. In most instances, parents are angry because they have to wait.

In addition to parents, my friend is routinely flipped off and cursed at by other drivers who have while he helps to get a differently-abled student on the bus.

School bus drivers deliver very precious cargo. I think we all could make more of an effort to be civil to them.

Bernie you're right. I see many abuses of the traffic laws while impatient drivers violate state laws that are in place to protect children.
On the other side of that coin, I have a philosophy that I would like to share with you. I see many women drivers who really don't use common sense when behind the wheel of an auto. So here is my suggestion. The only women drivers should be women over eighty and then there should be a law that mandates they be accompanied by both parents.
forgive my sic sense of humor
Hokie Joe

Was your "friend" also regularly figuratively "flipped off" by a current or former inmate doing time for a NorCo offense in the Monroe County prison system?

I bet the majority if not all are transplant parents. The entitled that left their state because their entitled mentality cost them dearly there and is costing the life long generations now in our once lovely area.

A close friend of mine drives a school bus. The stories about unruly kids and obnoxious parents are endless and jaw-dropping. Every conversation I've had with him for the last 20 years ends with me saying, "I don't know how you continue to deal with this." There are also many stories of heartwarming kindness by appreciative students and parents. But the troubling stories are shocking and more numerous. I don't know how they continue to deal with this.

My wife and I were coming home from a recent doctor's visit in Bethlehem. When we got to the Mall on Linden Street (at Applebee's) we stopped at a "traffic light" and were right behind a school bus. We could see the kids were out of their seats and acting up when one of the youngsters dropped his trousers and put his naked butt against the window in the emergency door. We wanted to report the incident to the driver of the bus but because of the traffic we were unable to do so. This is a true story and not meant to be funny. My wife and I still talk about this incident today. We are both in our eighties and have never been witness to an idecent exposure incident. We didn't want to cause any trouble for the bus driver so we didn't report the incident to the police. What should we have done.

7:39 am: Should you ever encounter issues with a school bus, get the bus number, note the time, and then call the district’s transportation department. Most, if not all, buses have video and it will be very easy to identify the child. If Bethlehem, Dr. Roy takes discipline seriously and the matter will most definitely be investigated. Even now, if you can recall date/time, call the transportation department. Only a couple of buses follow that route, so it will be easy for the district to investigate.

My comment to this article: Stop dancing around the issue and call it what if is — BAD PARENTING. The parents of the 1980s Me Generation created monsters by making their children think the world owed them something. I work in education and can’t believe the level of disrespect and entitled attitudes of children and parents. Sitting at home for a year (and let’s be real — few “sat” and it wasn’t a year) didn’t make kids unruly, rather it just gave parents and others a way to excuse the rotten behavior.