Though Incarcerated, Mezzacappa Refuses to Appear at Hearing to Review Her Sentence 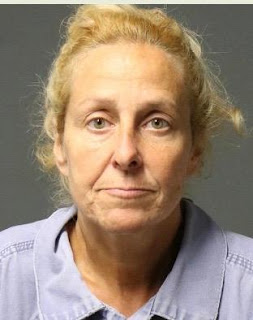 If you've been following the antics of West Easton Borough Constable Tricia Mezzacappa over the years, you know that she has a history of refusing to appear for hearings in both civil and criminal matters. She's even spent time in jail as a result of several bench warrants that had to be issued for her. But yesterday, she pulled off something new. She refused to appear at a scheduled hearing to review her sentence even though she's already in jail. Let me tell you the story.

By way of background, Mezzacappa was convicted of false reports to the Pennsylvania State Police after a jury trial in march. She attempting to frame a black neighbor with accosting her at gunpoint. She told troopers she had fired her own gun at him as he ran off. A jury determined beyond a reasonable doubt that she was lying. The case was prosecuted by Assistant DA Abigail Bellafatto, assisted by unpaid summer intern Richard Huntington Pepper. The trial judge was Stephen Baratta. Mezzacappa represented herself, although Judge Baratta appointed a standby counsel to assist her.

Mezzacappa had no prior record of significance. Judge Stephen Baratta sentenced her in April to 12 months probation with conditions that included no contact with the victims, a psychiatric evaluation, a drug and alcohol evaluation and the temporary surrender of all offensive weapons and firearms.

On the very day she was sentenced, she violated the terms of her probation. She left a note for the victim and told both the ADA and her probation officer that she had no intention of complying with Judge Baratta's sentence.

Mezzacappa was as a result picked up on yet another bench warrant and has been housed at Monroe County's correctional facility since that time. Judge Baratta directed that she be given a psychiatric evaluation and drug and alcohol evaluation before being released.

The psychiatric evaluation was apparently conducted, but my understanding is that she refuses to submit to a drug and alcohol evaluation.  Though she refuses to comply with Judge Baratta's own sentence, he agreed to review her case yesterday.

Instead of transporting prisoners from jails to courtrooms, court officials often have defendants participate by video. That's what was supposed to happen with Mezzacappa. But at the appointed hour, all the video feed showed was an empty chair in an empty room.

A corrections officer eventually appeared, and informed the court that Mezzacappa refused to get dressed or leave her cell.

My views concerning Mezzacappa are colored from my numerous negative interactions with her. But it seems clear to me that she has no respect for the court and no intention of complying with any probationary sentence. While her continued incarceration is far from ideal for her own rehabilitation, it will at least keep the rest of us safe for the next few months.

Ridge Street residents. myself included, are shouting... "Best Summer Ever!!!"

Has there been a competency hearing? The Court may order an evaluation on its own.

The court did order a psychiatric evaluation. The court knows that she poses a danger to herself and others. I get that jail does little to rehabilitate her, but one of the reasons to incarcerate someone is to keep the community safe. There should be some consideration given to that reason from time to time.

As West Easton property values skyrocket because of her absence, this is just a bubble that will burst upon her release. Pro tip: sell your West Easton property before she gets back from MonroCo and don't so much as whisper her name at any point in the sales negotiation. This is a brief window of opportunity. Act quickly. Seize the moment.

is he home up for sale yet, did they foreclose on it yet? We all know her family has disowned her I am sure she has no way to pay the rent. Maybe she will lose everything just like the manslab did when he went away

She owns her home.

I know Ms. Mezzacappa is a terror and has caused much heartache and has harmed reputations, but I can’t help but feel a little sorry for her. We all agree she has mental health deficiencies and this latest stunt shows that she probably has oppositional defiance disorder (in a school setting, that would be a get out of jail free pass, as kids with that label can do pretty much anything). I hope she is being kind to the correction officers, but she is where she needs to be at this point in time. Shame that Allentown Hospital was seen as unnecessary, as she probably would have been helped there.

Would be cool if people with obvious mental instability weren't traipsed through even more pain by people with a blog.
Says more about the people highlighting her issues, than it does about her, really.
Keep up the exposition Bernie.

Another good "person" with her 2nd amendment right.

I'm assuming that she's a Biden/Harris supporter, too.

Stay in jail, loser. We're again in the middle of a heat wave. I'm sitting by my pool, grilling hot dogs for the kiddos and pups, wife is having a wine spritzer and I'm nursing my beer. Oh, didn't you used to be a nurse?

1:11, for a very long time,assholes like you were denying she was unstable. She is an elected Constable, has been a candidate for several local offices, was a member of the GOP exec committee and an avid and very vocal Trump supporter. People should always know about persons like her.

Bernie I have been claiming Norristown state hospital for the criminally insane was a perfect fit for this unfit person.

She's working on her manifesto while incarcerated. It's going to be called, "My Struggle."

@10:10 PM Me thinks the commentator in question had a bit too much beer, or was chasing it with the wife's wine spritzers. The comment makes no sense.

Unfit for trial should not be a reason to get out of your punishment. If you are fit enough to do a crime no matter what it is and the court for some reasons decides you are not fit for trial you should be remanded to a facility for treatment. NO time off, no let ack out in public, no day pass no BS. Stay there until you are rehabilitated. Then before you are released back into the public you get tried for the crime you did. And also the time you are in rehabilitating does not count toward statute of limitations. That time for your crime is put on hold. The window and time reopens when you are rehabilitated.

She doesn't need her home. She lives in your head rent free.