Although I kicked back a bit yesterday, I have been pushing myself pretty hard as I prepare for my Bikeventure along the 330 miles of trail between Pittsburgh and D.C.  The trip starts August 8. Curt's Cyclery, located in Nazareth, really souped up my Cannondale so that I travel 2 mph faster than on my other bikes.  So I've pretty much resolved to travel light and push hard. No reservations. When I'm tired, I stop. If there's no room at the Inn, I  have an emergency tent, thanks to Agent 99.

I've heard from and have met several people who've made the trip. One of them called it a "life-changing experience." That's fine so long as it's not life-ending. My biggest source of inspiration is someone I've never met.  I've only read about her and have followed her on her Instagram feed, called "recapturinglife_.Her name is Whitney. In June, she began her ride along the Great American Rail Trail. That's a 3,700-mile journey starting in Washington, D.C.,  and ending in Washington State. 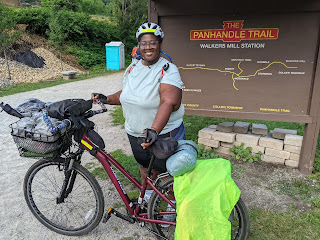 I discovered Whitney on the Facebook group created by Great Allegheny Passage and C&O Canal enthusiasts. Whitney started her trip along the C&O Canal in DC. She made it through the C&O and Great Allegheny Passage and is currently in Ohio Amish country, where they all ride ebikes instead of carriages. She's riding solo, and as you can see from all her gear, she's camping.

She seems to have encountered lots of good people who've helped her and one bad person who stole her food while she was asleep in her tent (She was thankful the thief left her and her bike alone).

She's going through 12 states and over the Rockies. She will have to share the road with cars over half of her journey

She is a badass for even trying.

When I see what she's doing, I have to laugh at my own trip, which is only 1/10th the distance she's doing.

Looks like I have a trip for next year. I better learn some basic bike mechanics.

This is you at your best!

One of them called it a "life-changing experience." That's fine so long as it's not life-ending."

We're all with you! It's a great adventure.

Bernie I can't wait to hear about this, best of luck!

Awesome and amazing. Enjoy the journey.

Best of luck on your C&O ride. I never heard of the Great American Rail Trail. but she is definitely an inspiration to all of us cyclists.

I have the 65 mile Ben to the Shore Ride on Aug 29 for the Families Behind the Badge Children's Foundation. I also a, looking at the Pine Creek Rail Trail, York County Rail Trail, Ghost Town Trail, and Gettysburg for this fall besides my local rides.

Bernie, I am cheering you on! Your amazing with your commitment to good health!

Keep up the good work! Pedaling your ass off is a plus in the legal profession. Or is it a sign of a legal aberration?

Keep up the good work! Pedaling your ass off is a plus in the legal profession. Or is it a sign of a legal aberration?

I rode across the country by bicycle in the late 90s, after graduating from college. During that period I benefited from more kindnesses than I can count. Complete strangers welcomed me into their homes, fed me, told me their life stories. It was indeed the experience of a lifetime.

Now I pay it forward by hosting touring cyclists via warmshowers.org. The cyclists get hospitality and I get to briefly be part of their adventure, and also relive my own.

Most cyclists I host are around college age, but there have been seniors too. Next to none were middle-aged, with the exception of one family with their two young kids.

Do it! If you want to talk about planning for your trip, you have my email.

Wow! That's amazing! I was also unaware of warmshowers.org.

If my health holds, I will do this next year. I suspect the middle-aged are unable to get away. I thought my brother did this, but he corrected me recently. He only went through Pa. and back. So I'll make him join me next year. You're welcome to come, too!

Whitney's story is amazing. It is refreshing to see that some people are still "living in the moment." This is a jem of an article among all the negativity showered upon us in our daily lives. Thank you, Bernie, for sharing and best of luck on your upcoming journey.