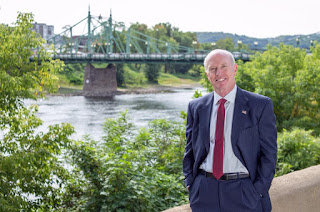 District Attorney Terry Houck updated Northampton County Council yesterday on the upcoming central court commencing on July 6. This court was established by President Judge Michael Koury, Jr., and will conduct preliminary hearings for jailed defendants. Judge Koury concluded these hearings will be more efficient, secure and cost-effective if held at the courthouse.

DA Houck previously praised Judge Koury's decision, noting this system has worked well in Lehigh and other counties. He did have one concern. He noted that police officers should remain armed at these hearings. He explained "they have a target on their back when they don't have a gun in their holster."

President Judge Koury apparently agrees. Houck informed Council that Judge Koury is preparing an Order that will enable uniformed police officers to carry their firearm into Courtroom 4, where central court is located. This is only about 50' from where officers currently secure their firearms when they appear at the courthouse. "Judge Koury was all for it," said Houck.

This has also been a concern of the Northampton County Chiefs of Police, who worry that unarmed uniformed police officers could face retaliation from gangs.

"When they don't have their sidearm, they're out of uniform," noted Houck. "I think it's dangerous."

Houck indicated that only one county - Allegheny - prohibits all law enforcement officers, even deputy sheriffs from wearing firearms.

Council member John Cusick also asked Houck about the opioid crisis. Houck said there's been an increase in what he calls a "serious problem" and questions whether the cure, i.e. methadone, might be worse than the disease, i.e. addiction.

Houck added that fentanyl is fooling drug users. "They're taking these drugs thinking it's one thing, and it's not, and that's what's killing them."

In response to a question from Council President Lori Vargo-Heffner, Houck indicated that the Courageous Conversations program continues. That program was started in the aftermath of the George Floyd murder, and included conversations that included police officers, leaders within communities of color and ordinary citizens. After several large meetings, it was decided to continue in smaller groups. He indicated police departments have an interest in continuing these conversations, but individual departments have manpower issues.

Council member Ron Heckman told Houck several police officers have told him they are concerned about an increase in gang activity. "It's streaky," the DA responded. He noted gangs come from New York and New Jersey, mostly Jersey. He said that if you "step on it quickly, it usually subsides. And it has subsided lately." He added that the Regional Crime Center (RIIC), located in Allentown, has really helped to combat gang crime. It enables investigators to identify co-conspirators

"Is it an epidemic? No. But they do wander over here on occasion to sell drugs and when that happens, we usually have violence ... ."

Houck noted that both Easton and Bethlehem Police Departments have detectives specifically trained for gangs.

Council member Kerry Myers asked Houck to explain whether crime has increased or decreased in the pandemic. "We saw more drug cases and more domestic violence, and that was in direct relation to the pandemic," answered Houck.  He indicated other crimes are down.

Good for Houck. he had a tough time with the RIC funding. Word is McClure didn't like it and wanted his council to strip the funding.

There was one and only one person opposed to the RIIC - Lori Vargo Heffner. She actually wanted to defund the DA and should pay the price for that this November. You have previously made this claim, and I see nothing to back it up.