Thode: LV Sets New Case COVID-19 Record, But It Might Be Less Deadly

Steve Thode, who has been keeping track of the COVID-19 data here in the Lehigh Valley, reports that the latest virus variant - Omicron - is particularly virulent. We've set yet another new case record. But unlike previous mutations, Omicron might be less deadly

Lehigh and NorCo have smashed various COVID case records as of today. The following are some of the new records set: 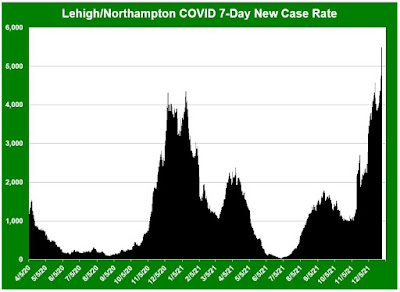 I do not have up-to-date death data for Lehigh/NorCo. However, here is a chart from the CDC with US results as of December 26. The red line is the US total 7-day moving average of new cases which stood at an average of 205,677 new cases per day for the seven days ended on December 26 (about 1.44 million new cases for the seven days). The orange line is the 7-day moving average number of COVID deaths per 100,000 population.  It is striking that, with the Delta variant (July to early December), deaths and new cases tended to move in tandem with deaths lagging a rise or fall in new cases by 2-3 weeks. However, under the Omicron variant (since early December), the death rate per 100,000 population has stayed almost constant although new cases have skyrocketed. Still too early to say for sure, but it appears Omicron is substantially less fatal than Delta. 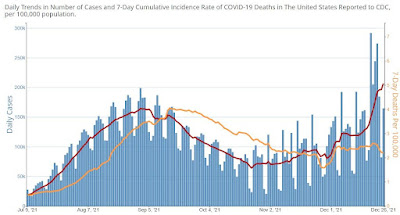 The bad news is everyone will get covid sooner or later, the good news is that after that happens covid will just be another seasonal inconvenient ailment.

You might want to check the definition of virulent. How can Omicron be(particularly virulent)and (less deadly) at the same time. Not only is Omicron less deadly, those who become infected with the Omicron variant are less likely to be hospitalized. Just Sayin.

The Omicron variant is more infectious but appears to be less deadly. Perhaps the word choice of virulent is less than the best.

Not to be a doomsday person but all it is going to take is another variant to occur which is a throw back to the earlier deadlier versions and we will be right back in the fun. This could go on for years and the vaccines could go on for year. Remember this virus is on the common flu basics which we still do not have a true handle on. We just guess which strains may be the worst every year and create a vaccine cocktail to hope to minimize the impacts. COVID could follow the same path very easily.

What is the actual morbidity / mortality breakdown of these "Cases?"

How many are asymptomatic / false positive?

How many are minor, short-term, flu-like symptoms?

How many afflict those without comorbidity?

How many afflict those with multiple comorbidities?

Without that fundamental breakdown, a simple count is virtually meaningless.