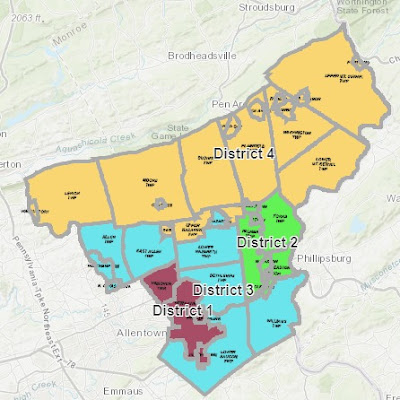 Updated 14/4/21 at 9:10 pm: From time to time, I completely blow a story. This is one of those times. In my original report, I thought County Council had voted to retain the old boundaries. I was dead wrong. I had to re-write. Then I blew how Council members voted. This necessitated another correction. Finally, I incorrectly placed Lower Saucon in two districts, making yet another correction necessary. I'm terribly sorry for my mistakes.

It appears that you left Lott off the list of people who voted no. There are 5 names for, 3 against.

Thanks for catching my error so quickly. I fixed and will listen again to that portion of the meeting.

I was confused and had this all wrong. I basically had to re-write the story.

Put up the new map.

Did Myers vote for it, or against?


Isn't she president of council? Sounds more like something a bully would do. Did she do it to screw over the guys that wanted the other plan? Wasn't that plan done by the district guys themselves? Also, didn't this plan get rid of Cusick?

Shoeless Bernie O'Hare. Say it ain't so Shoeless Bernie.
On the other hand, Heffer wasn't for the redistricting plan and lobbied for her own configuration. Heffner is a self serving person and should not be reelected as Council President.

There are two options, the one adopted and the configuration currently in place.

I have no idea whether there was a third plan.

As for being self-serving, Vargo-Heffner is the person who drafted the increase in salaries for top elections officials and who suggested setting aside $ for studies at Gracedale and for IT and for salaries. This proves she is no rubber stamp.

The next Council president should be Cusick. He is the best informed and asks the questions that need to be asked. I sometimes disagree with him, but he provides true oversight. But he's a R, and I doubt anyone will vote for him on the D side.

I deleted two comments - one suggesting that Covid is a made up disease and another along those same lines.

Because I screwed up. It is in D4.

Bernie, should we interpret this to mean Cusick won't run for re-election? He voted for it, but this would move him into District 1 as he's a Williams Twp resident. Republicans will have a tough time winning in a Bethlehem-based district.

Tom, Kevin Lott said during debate that he was concerned that the new district would effectively make it unlikely for a sitting district council member (Cusick) to seek re-election, and pointedly asked Cusick. Cusick never really answered him but did support the new district. Given his interest in county government, my take on this is he will run for Controller. He certainly would be an effective check if he were elected. I have not spoken to him and am just speculating.