Pedestrians are People, Too! 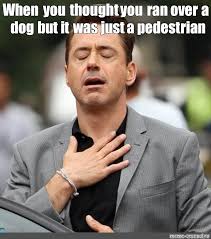 I hate to admit this, but I'm a fair weather cyclist. One the temperature drops into the low 50s, I no longer enjoy the bike. I hit the gym, where I love the arc trainer. I can get some high intensity workouts there, although I miss being outside. I often walk to the gym and back and walk instead of driving for groceries. But I have to tell you that walking is a lot more dangerous than riding a bike.

The data support me. Nearly 6,000 walkers were killed in traffic accidents in 2017, compared to 777 cyclists.

Part of the reason for this is poor infrastructure.  My walk to the grocery store takes me along a road with no sidewalks. I've had some close calls with distracted drivers who are paying more attention to their cellphone than the road.

Another problem is at crosswalks. On Sunday, I was returning from the grocery store with a knapsack full of coffee. I stepped into a crosswalk. An entitled middle-aged woman with a DAR bumper sticker was moving like a bat out of hell even though she had a stop sign. She missed my knees by about an inch.

"What the hell is wrong with you?" I shouted, none too happy at almost being bowled over. She said nothing, then turned alongside me, and shouted, "You're supposed to stop for cars.!" She then tore off.

I realize I'm a 70 yo bottom-feeding blogger, and none too popular. But there are also lots of kids who walk the streets of Nazareth as well as mothers pushing baby carts.

So just as I suggested we should be nice to school bus drivers, we should also be nice to and look out for pedestrians.

I told you. The only women drivers should be women over eighty and then there should be a law that they must be accompanied by both parents.
I'm glad you weren't hurt.

Generally, I would totally agree with you on this topic. You followed th laws and did the right things. Sadly, many people today feel entitled to total attention to their desires. I see people walk onto the road without even looking. Rarely at crosswalks. Often at night in dark clothing. Pedestrians have responsibility as well. In today's it's all about me society it is hard to miss them.

This past fall,I have seen an elderly man (always holding his back) walking the narrow berm along PA248 between Nazareth and Bath. I have also seen him walking at dusk along PA329 towards Bath. I appears walking may be his mode of transportation and i am concerned for his safety as he has caught me by surprise. Please keep a watchful eye when driving this area.

Plain and simple. There are too many people that do not give a shit about anyone else other then themselves. It is always the other persons fault for them getting in the way or having a wrong opinion or not believing the way they are supposed to be. We have rewarded these f-ups failures and fools for too long. There are too many examples of how as a society over the past couple of generations we have encourage the entitlements that we now complain about.

The moron in your example was probably late for her starbucks pick up. Or even worse just felt she was entitled to the road.

In the eyes of the gun lovers too bad you did not have a gun Bernie. Under the new guns laws carrying one is now acceptable. Also under the Rittenhouse defense rules you could have pulled your gun and put a few bullets in her or her vehicle because she threatened harm to you by trying to run you down. And you would have only been defending yourself.
Totally justified.

It would have made her think about her entitlement.

My bet is the vastly larger number of pedestrians versus cyclists would suggest that cyclists are more at risk. I have only common sense to come to that conclusion.

This does not mean that other points in your opinion are not true--simply that like most journalists today, you cherry picked statistics to serve your purpose. The misuse of "statistics/data" is a pet peeve, sorry.

BTW-we should always be nice to others, don't you think?

Stereotypical slate belt behavior. Ignorance knows no borders, but there is something in the water in those parts.

Good rule of thumb is to always assume people in cars will not see you.

Aaack, you mean there ARE asshole drivers?
Bernie did everything right; but some pedestrians don't.
Please peds...step INTO the crosswalk so I can see that you want to cross!

While inattentive pedestrians glued to mobile devices can't be left from the discussion, this post is 100% correct and still understated. Having traveled extensively, and to all 48 contiguous states, I think PA is one of the least pedestrian-friendly states in the US. Access for, and attitudes toward, pedestrians are hostile at best. Our denser population and exponentially increasing auto and truck traffic are going to result in a lot more tragedy than we're already seeing a couple of times a week on local news.

I recall this topic coming up before a few years back and nothing has changed in Allentown. When I stopped on 3 different occasions for people stepping on to the crosswalks on Hanover, once a mailman, once a young girl, and once a blind man with an aide, cars zoomed right around me. As I said last time this was brought up: When Bethlehem started the right away for pedestrians in crosswalks they gave tickets to drivers who disobeyed the law and made sure it was advertised. Unless they do the same in Allentown it will never change.

"My bet is the vastly larger number of pedestrians versus cyclists would suggest that cyclists are more at risk. I have only common sense to come to that conclusion."

There are certainly more pedestrians than cyclists, but I stand by what I wrote. Walking along our infrastructure is simply more dangerous. On a bicycle, I can travel with the traffic and the roads can accommodate me. When you walk, there are often no sidewalks and very narrow shoulders. This has also been my personal experience as someone who both does a lot of cycling and a lot of walking.

Your statistical conclusion is flawed because there are a lot more walkers than bike riders.

I allways thought that old folks give you more points if you run then down? The point system is very low for mass public gathering as it makes for easy targets.

Maybe McClure should put in his wonderful crosswalk like he did at the County courthouse. What a joke.

"Maybe McClure should put in his wonderful crosswalk like he did at the County courthouse. What a joke."

Ask the people who were hit by oncoming traffic of they think it's a joke. That crosswalk, which has included flashing lights, has saved lives. Former Exec Brown actually painted it over. I'd rather have an Exec who cares about keeping his workers alive. Your criticism indicates only how screwed up you must be.

"Your statistical conclusion is flawed because there are a lot more walkers than bike riders."

I have already responded.