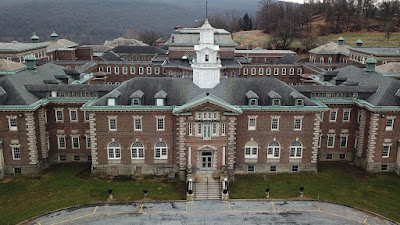 In the cRaZy world of state government, one hand often has no idea what the other is doing. So while the State Department of General Services wants to tear down Allentown State Hospital at a cost of $15 million so it can sell it for $2.5 million. Makes sense, right? But get this. At the same time, another state agency says it should be kept.

And people wonder why I'm nuts.

The Pa. Historical and Museum Comm'n is the "the official history agency of the Commonwealth of Pennsylvania." It has an "An Official Pennsylvania Government Website" and everything. In other words, it's part of the government. And while the Department of General Services, along with a gaggle of local state legislators, are hell bent on wasting your money to tearing down the state hospital, this official state agency thinks it's just fine.

He's an architect, you know.

The Pennsylvania State Historic Preservation Office (“SHPO”) is a bureau within the Pa. Historical and Museum Comm'n. It looked at the grounds last year. It concluded that the Hospital retains its integrity and should still be considered eligible for listing in the National Register.

In a letter to General Services dated letter dated March 12, 2018, SHPO declared that “due to the overall condition and general maintenance” of the Hospital buildings, the Hospital “may be viable for rehabilitation and reuse.” In fact, SHPO determined that a real estate market analysis may conclude that the highest and best use of the Hospital would “support a combination of adaptive reuse and redevelopment.”

But other vested interests want you to waste millions in taxpayer dollars to demolish perfectly good buildings and sell it to a tax cheat.

Makes sense to me.

It should be able to be used as an educational facility, or sold to be used without the tear down.No one has ever accused the government of being efficient or practical. how much are all these surveys costing that are contradicting each other. If they dont want it just have an auction and let the market decide. It would make one hell of a private school.

What building was your residence Mr. O'Hare and did your doctor deem you criminally insane or just cRazy? The cRazy's are the state gate keepers brokerage firms dealing with the publics assets. But than again this could be another farce for a local consortium to harvest the childrens childrens future healthcare payments form developmental purposes.

Anon 8:31 is 100% right...this stinks of Jen Mann and her servant Schloshberg

They should let Hyman buy it. He has taken many of the old buildings in Allentown and rejuvenated them. But that may make too much sense for the government.

Something smells Bernie? It's probably Robert Trotner! He never bathes or washes his clothes!

Bernie: Why didn't Nat Hyman run for Mayor? I heard that Ray was very concerned that Mr. Hyman would run because he knew that he was the one person who could have easily beaten him. If not for Ray's write in campaign, Hyman would have easily beaten Pawlowski, and we would not have a 27% tax hike, a clueless do-nothing Mayor in Ray AND his now being re-elected because of only token opposition. I would have definitely voted for Hyman and most people I talk to said they would have also.

I couldn't be happier at Bridgeworks Center, but, if ASH were to be refurbished under a mixed-use model (retail, office space, maybe some dining, maybe even some residential, etc), I'd be very tempted to move my firm's offices there. It's a beautiful, bucolic setting with gorgeous views overlooking the Lehigh River. Who wouldn't find it attractive?

This all goes back to a crocked deal by Jenn Mann and her puppets: Mike Schlossberg and Peter Schweyer. Please FBI, who we know reads this blog, INVESTIGATE THESE CRIMINALS.

Amen! We have to get Mann, Schlossberg, Candida Affa & Courtney Robinson out of Allentown to restore some honesty and integrity. They are worse than Pawlowski.

There should be a clause in state officials part time job descriptions that the public can commit them to the historical mental health treatments. Downtown center squares lobottomys, shock treatments and the ice pic through the eye socket for a stirr. This is appropriate treatment official used car salesmen representation.

Mr. O'Hare could you write a letter to the federal law makers to bypass state law for the punishments of such henious creatures posing as human?