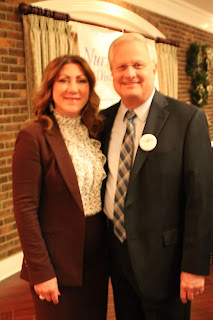 Last night, before a throng of about 120 supporters at the Blue Grillhouse in Bethlehem Township, Nuria DiLuzio announced her candidacy for District Attorney in Northampton County. DiLuzio is a graduate of Temple Law School, which she attended at night in her desire to become a lawyer. Daughter of an Albanian immigrant who fled Communist tyranny, DiLuzio said she would "enforce the law fairly and completely,with regard to the rights of all involved."

She has spent most of her two-decade career as a defense lawyer, and is Northampton County's first female Chief Public Defender. Though she has no prosecutorial experience, she pointed out that neither did John Morganelli when he took office a quarter century ago, and he leaves behind a legacy of which all can be proud.

She said the office of District Attorney "is not about power, but service." She pledged to lead an "exceptional" team of prosecutors and law enforcement to protect and serve us all. She also promised "new and creative ways" to deal with crime. "I will work with county government and all concerned citizens to protect our most vulnerable, like our children and seniors. I am prepared to do the hard work as your next DA."

Based on those attending DiLuzio's announcement, she already appears to be the person to beat.

She was introduced by Bethlehem Mayor Bob Donchez. He both endorsed her and read a letter of support from State Senator Lisa Boscola.

The biggest plug came from Bethlehem Police Chief Mark DiLuzio. He referred to Nuria, not just as his wife, but as "the woman I love."

Both Northampton County Sheriff Rich Johnston and Lehigh County Sheriff Joe Hanna, who is running for re-election, were there. So were a rather large number of law enforcement people. The bastards were having my car towed while I snapped pictures.

There were also several trades union reps on hand.

Where was John Morganelli? As an announced candidate for judge, he has to be Switzerland when it comes to politics.
Posted by Bernie O'Hare at 1/15/2019 12:00:00 AM

Is it really a good idea to have a DA and police chief who are spouses? It seems like that could be a conflict of interest issue if there are problems in the police department.

DiLuzio said she would "enforce the law fairly and completely,with regard to the rights of all involved."

Thats good news for you. No one should discriminate against disbarred lawyers who peddle barbie dolls and beanie babies, 2 for $1 in the halls of the courthouse all day long.

Even disbarred disgraces need a pension. And the judges who sulk all day long in their chambers from 10:30 am to 1pm need the cheering up.

Christine Blasley Ford 16 x 24 posters will have to be added to the barbie doll/ beenie baby bin, and sold for $5. There that is it. Bernie and the beenie babies will be allowed to continue to stink up the courthouse, even when the mancrush morganelli leaves to take a shower

Down with the patriarchy ! Here she comes....

Plastic straws be damned! Its a crime!

Has she been endorsed by Tampax yet, or is it just Emily's list?

She seems qualified. But can we find somebody who is unrelated to 10 people in the same field? The incestuousness of local politics is depressing. This particular example invites an extraordinary level of conflict of interest.

The Criminal Justice System and Prosecutor's Office should remain part of the Democratic process and not become a family business. If so truly committed and sincere about helping seniors and children why wouldn't one have begun doing so years ago as opposed to representing those accused of crimes. In my opinion, a family business should be like a pizza shop or hardware store not the office of prosecutions. That legal business should only be left up to an objective, non-police official related, professional with proven experience. I'd even prefer one that is a longtime advocate of crime victims preferably one that has been working on behalf of the Commonwealth far before news of the present DA job opening. That would make for a solid candidate. One that has been and will continue advocating for the people and crime victims yet hold police accountable as well. If you knwow any tell him or her there is a job opening that pays well in Northampton County. Put in an app. Next candidate, please

Bernie? Whats with the comments of 01:24 AM? I thought maybe a few trump hate dolls or more locally maybe a Angle or a Tricia doll but Beanie babies? I'm disappointed as I thought you had less a heart then that-

Whats next? your gonna come out of retirement of your pole dancing career?

Have a good day my friend. Um maybe you can peddle a JM doll on mancrush mondays?

"Is it really a good idea to have a DA and police chief who are spouses? It seems like that could be a conflict of interest issue if there are problems in the police department."

Since both DiLuzio and her husband would be in the business of prosecuting bad guys, there is no conflict. If one of those bad guys is a Bethlehem cop, the matter could be referred to the state AG, who has concurrent jurisdiction.

Bernie i see the crystal Drano is needed to flush the wholes of the pig lady on this fine morning! This cleansing cure would need to ferment a couple of days of even months to rectalfy its ills.

She'll be tough to beat. Has Houck been pushed aside or will there be a D primary? Zito getting in on the R side?

Okay Bernie...….so are you saying why she was public defender that because her husband was chief of police that that case could cause a conflict. ???? more curious than anything else.

11:14, her defense work clearly presents a question of a conflict of interest in any matter prosecuted by the BPD. For that reason, DiLuzio sought an obtained guidance from the PanBar Ass’n. This was discussed before she was confirmed. The conclusion is that since both she and her husband are primarily administrators, there is no conflict.

Bernie , does this candidate pass muster ? Regardless of the police Chief husband. I have no issue here with a DA being married to a police officer but could an issue arise in husbands venue by a defendants attorney,say from Philadelphia?

I have met the Chief at the NAACP dinner and he was a gentleman,and professional in manner. I’m just throwing out a second ball on the court . Didn’t we have an issue here before just like this in NorClo?

Don't really think it is an issue. I believe people do get upset about all the family connections in government. Real or imagined, it does lead to the far right and left conspiracy theories that everything is fixed.


"There were also several trades union reps on hand". In other words UNION THUGS!!!

Being married to the BPD CHIEF is a total conflict of interest in my book. But the powers of the City of Bethlehem & NORCO will get her the post of DA. I guess "It is what it is"

I kind of hope she get's beat come election time & a strong challenger steps forward to run against her but only time will tell.

It's early yet, there will be many others! I'm wondering who else is running for Judge?

She should run for Judge instead-