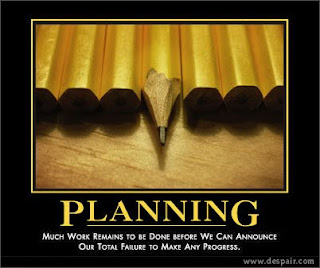 A new Committee formed by Northampton County Council Prez John Cusick is about to embark into an area neglected for years. Planning. Spearheaded by Ron Angle, this Committee had its first meeting yesterday, and identified areas where planning is very much in order.

Acting Fiscal Affairs Director Doran Hammon, who has monitored county finances for nearly thirty years, complained there's no real plan for county buildings and other assets like its vehicle fleet. He questioned whether the County should continue to own vehicles, or whether it might be less costly to enter into leasing arrangements. Angle suggested that it might be time to sell the Bechtel(Bethlehem) and Wolf(Easton) buildings, give the entire Courthouse to the courts, and move all other County operations to Nazareth.

Angle also pointed out there are 80 substandard bridges throughout the county and asked, "Isn't it time that we return to our core responsibilities?" Hammon added that the last major bridge project done in Northampton County was the Broad Street bridge in Bethlehem, which is owned jointly with Lehigh County.

Well what do you know??????Finally the light went on in the small brains of our elected officials. How can you run a household without planning for new roofs, upgrades, etc. etc. These same bunch of elected officials stopped planning (known then as the "five year plan") because they felt it wasn't necessary. Now that disaster is at the doorstep they finally wise up and see the need to do some long range planning. Bernie, instead of praising this group of idiots who voted to stop preparing a five year plan you should be pointing them out to us so we can throw them out of office. Just because you vote to change a plan doesn't mean you shouldn't plan. A plan is exactly what it is, "a plan". It can be changed but that doesn't alter the fact that the issue doesn't have to be addressed later. Thank you for providing a public service. Now go to the next level and point out these idiots so we can vote them out.

Yes..lets sell bechtold..One of the more solid buildings that the county has and build a new building in nazareth..Is he ion something?

5 year plan is great idea! If they do sell Bechtel Building along the way, I hope they provide another option for using his name. Maybe even the archive building could be a Bechtel (Marty), Hahn (Tommy) and Hemstreet (Jim) Building? They were quite a good trio of public servants for many years. Just saying.
BTW, all press seldom, if ever, attend Bethlehem Housing Authority meetings simce I resigned (I used to call and remind MSM when I was there). Guys like BHA Commissioner Joe Long must love that fact. Just like the good old days of secret D NC committee meetings under his Chairmanship. Oh well, I guess approx. 7% of housing units under BHA care not that important to MSM.

The information on substandard bridges is terrifying. Every expenditure should be compared to the importance of keeping bridges safe. Future generations may not make it to GracedAle age if they die on a bridge that was purposefully ignored by our government.

Another sham by Angle and his two robots to control the county. It will be tossed by the next County Executive.

there isn't only elderly people in Gracedale. That seems to be what people are not realizing. Unfortunately as young as 18 are there right now! Hope everyone in Northampton County has about 1/4 million in the bank cause if Gracedale is sold and tragedy strikes.....your gonna need it!

If Gracedale is sold, taxpayers get out from under a costly union jobs program and avoid a 20% tax increase to continue its support. Period. Thanks for playing.

Bernie i am going to gracedale today to visit,i will respond about gracedale when i return from the vist with a friend.

Gracedale needs an additional $6 million a year over what is already in the budget, according to the bullshit study from the Stoffa consultants.

If that is a fact, which most doubt, a 15% tax increase would generate around $11 million dollars in NEW county revenue a year. What the Hell O'Hare!!

Anyone with a brain and a calculator can tell Gracedale is being used as a scapegoat so Stoffa/Angle can raise some cash. Stoffa wants his drug addict lounge and Angle wants to cut the county workforce by 40% and raise some pocket change. The residents be damned.

Why claim you need a tax increase twice as large as would be required even if the numbers were true. Which they are not.

The game is up and you, Angle and Stoffa have overplayed your hand. People are being given the facts.

By making claims that exaggerate even your exaggerated costs, you have shown that the entire Gracedale sale is built on bullshit.

Shame on all of you.

Excellant points anon 9:41. Unfortunately Joe Owens and the rest of the press is so far up Stoffa and Angles ass they won't even use a calculator.

The numbers just don't add up. This isn't the first time Angle has just made things up to make his point. he is a sad human being.