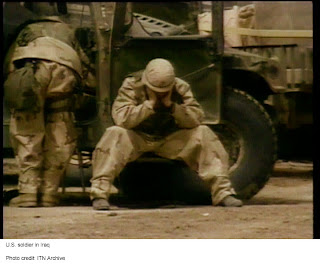 In the real world, I'm just a lazy title searcher. My eyes are going, and those damn books get heavier each year. But as I slowly go blind, even I still see firsthand what happens when soldiers who own real estate are shipped overseas. Banks who don't know or care will start foreclosure proceedings the moment a soldier misses a payment. Our Soldiers' and Sailors' Relief Act is supposed to protect servicemen from this type of predatory behavior. But soldiers serving overseas in Iraq and Afghanistan often don't know what is going on and tend to have a few other things on their mind.

Lehigh County Executive Don Cunningham, younger and far more energetic, must see what is going on, too. Today, he'll present a visionary property tax relief initiative for members of the armed forces on active duty.

It's refreshing to see one local leader willing to stick his neck out for the grunt serving overseas. That's where Team Bush, Congress and the Army itself have failed. Men and woman are being hurled like mannequins into combat zones with inadequate training, never-ending deployments and disintegrating equipment. Cunningham speaks of his proposal as a "shared sacrifice" for troops in harm's way.

We should also sacrifice Bush.

ALLENTOWN: Lehigh County Executive Don Cunningham is proposing a plan to give property tax relief to all county military personnel serving to support United States efforts in Iraq and Afghanistan.

Cunningham will outline the full proposal in a speech Wednesday (4/18) to the Lehigh Valley Military Affairs Council at noon at Saucon Valley Manor, 1050 Main St. , Hellertown.

Under the proposal, any member of the United States armed forces called to serve military operations for six months or more will receive a full rebate of the county property taxes on their home.

"Many of those serving to support our military efforts are reservists who have had to put their lives here on hold," Cunningham said. "The families left behind struggle to keep everything in order while their loved ones are making a very dangerous sacrifice to serve their county."

"I believe that the people of Lehigh County can make a shared sacrifice for these service members and their families and cover the cost of the property taxes on their homes while they serve our country in a larger capacity."

The proposal calls for a full rebate of property taxes paid on a service member's home if they are in active duty for six months or more. The proposal is for a two-year period covering both 2007 and 2008. If a service member meets the required six months of service, and if the service time spans into both years, they would be eligible for a full rebate of both year's taxes.

The tax rebate would cover all full time regular military personnel who own homes in the county as well as reservists deployed for active duty while serving in a guard or reserve unit.

It's unknown exactly how many families in Lehigh County this would affect. There are estimated to be about 300 reservists from Lehigh County. Service families would have to submit a rebate request which will be available soon on the county website at lehighcounty.org or by calling the Lehigh County Government Center at 610-782-3000.

"The issue here is not the total number, but our willingness as county residents -- regardless of our personal viewpoint on the war -- to sacrifice together to help those who are sacrificing for us," Cunningham said. "Many of our service personnel have given the ultimate sacrifice to these efforts. This is just a small effort on our part to say thanks."

Former United States Senator and Vietnam Veteran Max Cleland said, "Don Cunningham's tax relief idea is an example of forward-looking leadership. More than ever we need strong local, state and federal leaders stepping up to help military families. I hope this measure will be embraced and implemented."

Since the start of 2007, four Lehigh County residents have been killed while serving in Iraq: Ashley L. Moyer of Emmaus, Mark T. Resh of Lowhill Township, Brandon J. Van Parys of Lynn Township and Luis O. Rodriguez-Contreras of Allentown.

The only way I can see this being unlawful is under the uniformity clause on taxation. That clause does, however, set up a way for taxing jurisdictions to create a class of people that can be exempt from certain taxes within that area. The question becomes whether or not military folks fall into that class.

if it's unlawful, then our state legislature needs to make it lawful.

I remember, a few years back, NC council wanted to forgive taxes for elderly residents on fixed incomes. They learned they could not do so because everyone must be taxed equally. I asked Levi Price, who works for Don Cunningham, about the legality last night. He told me that the idea was cleared by the solicitor because everyone is still taxed the same.

I don't think it is illeagla. We have a recent Commonwealth Court ruling telling us Home Rule Charter municipalities may impose their own voting restrictrions.
If a Hone Rule Charter county can't give a tax break to servicemen on taxes that is is collecting for itself, something is wrong.

I think the bigger issue is the shame that our federal government has left so many families struggling to make ends meet, while their loved ones struggle to survive in combat zones. America's greatest resource, its' volunteers, hung outto dry at home and abroad, George Bush's greatest legacy. He didn't serve the military when he was in it, why be surprised that he not keeping his obligation to it as President?

it's a refund so it's going to upheld.