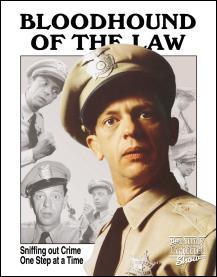 People steal. Always have. Always will.

In even the most secure banks, there's always an embezzler. So it's no surprise that Northampton County had its own embezzler, a low-level deputy who may have pocketed $125 thousand over five years. Many county employees are now waiting over three years for a payraise. Some have been sickened by all the dust coming from the construction for the judges' new palace. But most of them really care about their jobs and take pride in their work. As in most workplaces, the embezzler is the exception, not the rule.
But none of this is stopping Lamont McClure, chair of council's law and order committee. He's conducting his own investigation. It doesn't matter a bit that we already know what happened. It makes no difference that Controller John Schimmel has already acknowledged he should have audited that office sooner. McClure's going to solve this mystery.

Did I mention that McClure is not just a Democrat, but a county committeeman as well? Or that Schimmel is a Republican who recently announced he's seeking a fourth term? I'm sure that has nothing to do with McClure's probe.

He told council last week he wants to hire a forensic accountant to review all the work papers. Schimmel's office already undergoes a "quality control review" every three years by The National Association of Local Government Auditors, and is always found in compliance with government auditing standards. Council agreed to hire a forensic accountant, although it won't spend more than $1,000 to recheck what has already been checked.

Lamont doesn't really need an accountant. Last Thursday, he lashed out at Schimmel's suggestion that this quest is nothing more than a witchhunt. "Quite frankly, Mr. Schimmel, you've admitted you dropped the ball. You're a day late and a dollar short." Seems to me, he wants to be able to make this point several times between now and November, and that's why the county is spending $1,000 for a forensic accountant. It's actually a campaign contribution for whoever opposes Schimmel. It's politics.

I could understand being worked up over a $120 thousand theft, and perhaps voters should choose someone over Schimmel in November. But earlier that night, Grube admitted that the Wind Gap road was a $440 thousand mistake. Who's going to investigate that? Not Lamont McClure. He'd be probing himself.
Posted by Bernie O'Hare at 1/25/2007 12:10:00 AM

We can't have elected officials publicly "Probing " themselves! My God, do you want to blind people?!

Perhaps the word "probing" was not the most artful. On the other hand, . . .